Dawning of the Supertall 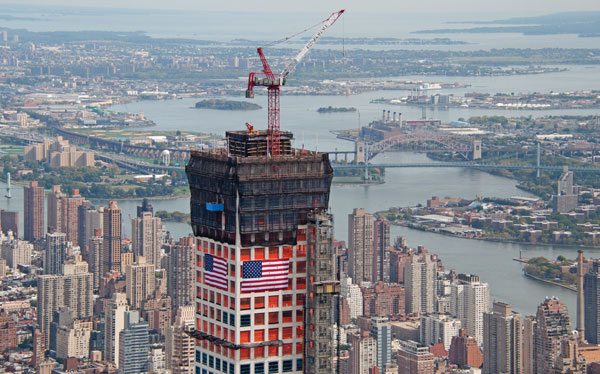 When lifting at heights up to nearly 427 m (1,400 ft), it's all about line speed. Such was the case for Roger & Sons Concrete as it helped construct what is now the world's tallest residential building at 432 Park Avenue in New York City.

The La Grange, N.Y.-based company used a brand new 24 t (26.5 USt) Potain MR 415 for the $1.2 billion project. The extreme heights called for an electric tower crane that could climb well, had a high lifting capacity and could employ lightning fast line speeds.

Tony Rodrigues, one of the family owners at Roger & Sons, explained, "The company wanted to make use of the MR 415's electric power and high line speeds that can reach up to 274 m (900 ft) per minute."

"When you're picking loads off a New York City street and lifting them 213 m (700 ft) or more in the air, a quick line speed and sturdy winch can really cut down on the amount of time spent on the job," he said. "Since the construction was scheduled around the crane's ability to lift, this meant the entire project was completed sooner."

The picks varied in weights, the heaviest being 21.8 t (24 USt). Roger & Sons Concrete celebrates the topping out of 432 Park Avenue, now the world's tallest residential tower, with the unveiling of a U.S. flag. Many of the lifts raised 27.4 m-long (90 ft-long) rebar beam cages and 8.1 t (9 USt) rebar column cages that were filled with building components. The use of cages meant the company could optimize each pick, lifting several items at once.

The Potain MR 415 was nearly 457 m (1,500 ft) above the street at the end of the project. It was at this time that line speed became crucial to completing the lifting work in a timely manner. At speeds approaching 274 m (900 ft) per minute, the crane was able to lift loads to the top of the tower much more quickly than other tower cranes.

"Line speed is where you really need performance when working at this height," Rodrigues said. "The line speed of the MR 415 reduced a lot of time that would have been spent lifting on this project. It was important that the crane replicates the speed at which we had seen it work on other projects in the city and for us, it did deliver."

One of the biggest challenges on the project was visibility. The close proximity of the nearby buildings left no room for error. At such great heights, the operator could not see the loads he was picking from the street below. The company relied on careful communication and precise control—aided by the smooth acceleration and deceleration of the 158 kW (215 hp) winch.

"The electric MR 415 was great in the cold—we never had to worry about the engine not starting due to temperature and altitude," Rodrigues said, "Also, we didn't have to lift 1,893 l (500 gallon) aerial fueling tanks for fueling the crane or 208 l (55 gallon) drums of oil for maintenance tasks, which saved time, and ultimately, money on the project."

The building was constructed "Chicago Style," meaning without a façade or solid walls. The frame was built with concrete columns, to which windows were popped in. Among the 89-storey buildings amenities will be 3.7 m (12 ft) ceilings, golf training facilities, private dining rooms and private screening rooms. It's due to open in the early months of 2015.

"Manitowoc Crane Care's service is on call 24/7, and that was part of our decision to purchase the Potain MR 415," Rodrigues explained. "Down time is money and when we pick up the phone, someone has to answer and resolve the problem for us. This was our first time working with an electric tower crane and in the beginning we had some questions and other issues to resolve—Manitowoc Crane Care service walked us through and even sent someone out to make sure things went well."

Roger & Sons Concrete was founded in 1976 by Acacio Rodrigues and his three sons, Joseph, Tony and Manny Rodrigues. It has been based in La Grange since 1998 and is still run by the family. The company began with constructing house foundations and shopping centers, and in just 38 years, made its way to working on high-profile job sites like World Trade Center Tower 4 and the recordbreaking 432 Park Avenue.