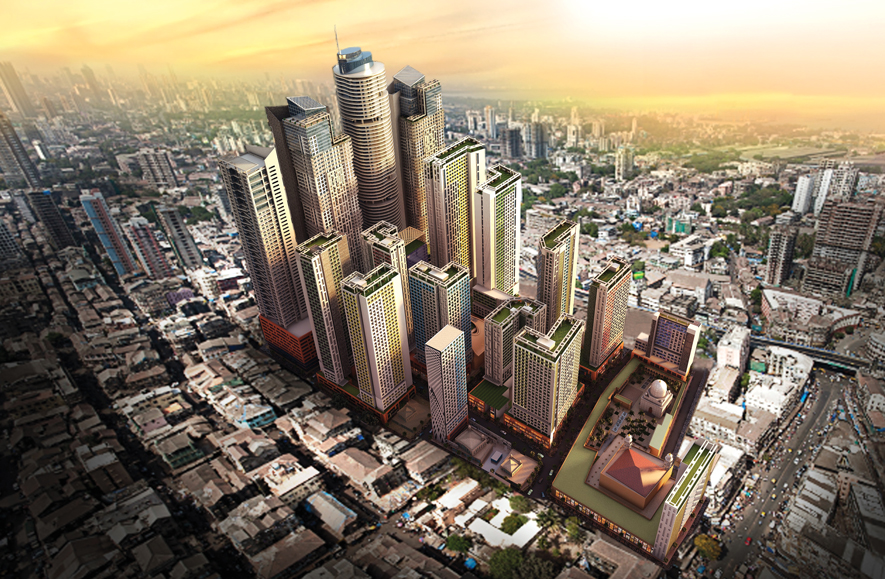 From a group of seven islands to a strategic port and eventually the financial capital of world's largest democracy - Mumbai has come a long way in the past three hundred years.

18th century marked the rapid growth of the city, when hinterland was connected to Mumbai by rail. Subsequently, many construction projects were undertaken to cater to the needs of flourishing markets and economic opportunities. Various business communities such as the Gujaratis, Marwaries, Sindhis, Parsis, Katchis, Dawoodi Bohras and Memons moved to the city from across the country to set-up their businesses.

To fuel the engines of commerce, labourers came from across the country. These labourers lived in settlements that grew parallel to the docks, Bhendi Bazaar (the project area) being one of them. The land owners and factory owners constructed rental dormitory-style tenements with common lavatories called 'Chawls' for the labourers and other migrants. Eventually, the immigrants brought their families in these single-room accommodations drastically increasing the density of the area. During the second world war 'Rent-control Act' was introduced which rendered these Chawls unprofitable for landlords. The meager rent acted as a deterrent for the repairs and maintenance of existing Chawls. In 1969, there were about 20,000 Chawls in dilapidated conditions, housing two million people (Dua 1992).

Present Day Mumbai, the Economic Growth - the Problem of Housing and Infrastructure
Today, Mumbai is the entertainment, fashion and commercial center of India. It is also one of the world's top 10 centers of commerce in terms of global financial flow. Mumbai accounts for 30% of income tax collections, 60% of customs duty collections, 20% of central excise tax collections, 40% of foreign trade and `40,000 crore (US $10 billion) in corporate taxes to the Indian economy. Mumbai is the world's 29th largest city by GDP, and with a population of approximately 23 million (Sankhe et al. 2010) people spread over about 600 sq. kms, it is the 3rd most densely populated besides being the 8th most populated city in the world. Mumbai's (MMR) GDP is expected to reach 11.9 trillion rupees ($265 billion) by 2030, larger than GDP of many countries today, including Portugal, Columbia and Malaysia (Sankhe et al. 2010). The population is expected to grow to 33 million by 2030 (Sankhe et al. 2010).

However, this financial success hasn't been inclusive. The old inner-city areas are plagued with century old deteriorating Chawls, narrow roads that make it difficult to walk let alone movement of vehicular traffic, lack of parking and open spaces, and access to only common toilets. The deteriorating living conditions have brought the area to a point of socio-economic stand still while the suburbs and other areas are growing rapidly.

However, due to the presence of one of the oldest and most prominent Central Business District (CBD), majority of population from suburbs travel to Island city daily. This area is well-connected through primary roads in both north-south and east-west direction (Project being in the center of this grid). Public transport services like buses are adequately available depending on the area (project site has bus stops at its periphery with buses in every 10 minutes to various location). All the three railways- central, western and harbor lines connect the island city to the rest of Mumbai (Project is within 2 km radius from all the 3 rail routes).

The city's economic boom attracts migrants in search of opportunities from across the country. This has led to acute shortage in low-income/mid-income housing; resulting in slums and pavement dwellers. Due to lack of space, most of the new developments are expanding vertically on small plots of land with no consideration for the wider infrastructure. 'Pencil Towers' have cropped-up at random, leaving inadequate infrastructure. These unplanned and scattered constructions aggravate the urban blight and add to the burden to an already stressed infrastructure. The governing bodies lack the resources to undertake large scale redevelopments on their own. The above makes a holistic, sustainable and inclusive urban planning model, the need of the hour.