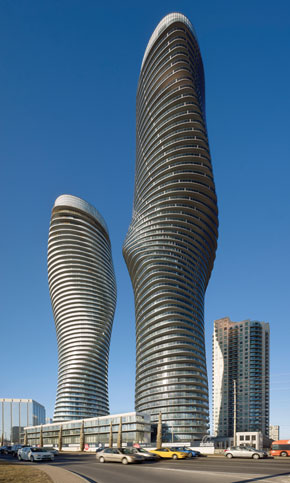 Absolute Towers is a striking example of a private/public approach to development in a city that was perhaps unaware of the extent an architectural design could impart conversation, energy, and vitality into the community. The towers definitively stand out on the skyline of Mississauga, bringing distinction to the little-known, but fast-growing, suburb of Toronto.

These towers have a sense of motion that brings a smile to the face. The torsional form of the towers evokes a natural, human feel to the buildings, and it is perhaps not surprising that the buildings have picked up the local nickname, Marilyn Monroe, with the curvaceous, sexy form an obvious association. Their effortless connection to the surrounding natural landscape creates a sense of unity while also putting forth an icon. To see such a dramatic form achieved with a simple, rational structural solution is refreshing.

Mississauga, a suburb of Toronto, is like many fringe towns in that it is growing in relation to its neighboring metropolitan area, though it does not have any architectural precedents for this growth. At around 734,000 residents, the city is in demand of residential property. To win the first international design competition held in the Toronto area in over 40 years, the architect put forth a radical design for a curving and biologically inspired design. When the tower project was proposed to the public, initially with only one tower, the scheme was so popular that the units sold out just days after the release of the building plans. After this response, the owner decided to buy an adjacent plot and build a second tower to meet the demand. 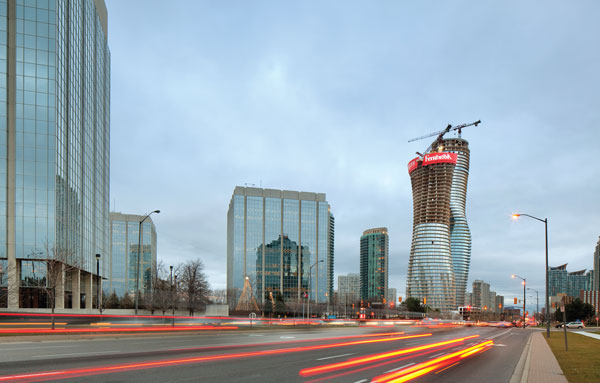