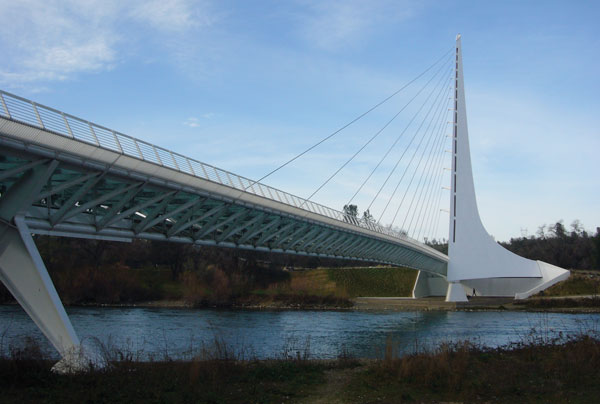 Dr. N. Subramanian,
Consulting Engineer, Gaithersburg, MD 20878, USA
Current day footbridges are often built in the urban environment and hence may require collaboration between the architect and the structural engineer. Many types of structural materials such as steel, concrete, prestressed concrete, masonry, timber and fibre-reinforced plastics, and a number of different forms like simple beam, arch, truss, stress-ribbon, cable stayed, cable supported and a combination of these systems could be used efficiently in order to build aesthetic footbridges. A few earlier aesthetic bridges are listed and a few elegant recent footbridges are described. Serviceability problems encountered in a few footbridges and the methods adopted to overcome are also described. An introduction to the current trend of using biomimicry to develop efficient, economic, aesthetic and sustainable footbridges is also provided.

Footbridges have a longer history than road or railway bridges. Ancient footbridges comprised of natural materials such as roots of trees, ropes, stones, masonry, and wood. Modern footbridges are built using reinforced concrete, steel, prestressed concrete, and fibre reinforced plastics. Though earlier footbridges were built using beams and arches, current footbridges are built in various configurations like inclined arch, trusses, stress-ribbon, cable stayed, cable suspended and a combination of these forms. In recent decades, footbridge designers have been able to push the boundaries of what is possible, much further than ever before. This is largely due to growing capabilities in computer visualization and analysis techniques, as well as developments in materials technology and other factors, with the result that creative designers are able to imagine and create more adventurous designs. However, such imaginative and creative designs should obey economic, environmental, social, and other constraints, in order that the built footbridges are safe, economical, durable, aesthetic and sustainable.

A bridge or a footbridge leaves an impression, and that impression remains as long as the bridge remains; hence bridge designers should strive to create something that is beautiful. Modern technology and tools provide ample opportunity to create dramatic bridges which not only provide safe passage but also result in creating adventurous structural and artistic expression. However, it is not always appropriate to build extravagant foot bridges, just because it is possible to do so, and in many cases the right solution may be much more modest and gentle.

A variety of special characteristics set footbridge design apart from other bridge work. Some of these special characteristics are (Wells and Clash, 2008):In this paper the approaches to aesthetic design is considered first, which is followed by a short description of some of the earlier aesthetic footbridges. A few modern footbridges are then listed with some details. One should not aim to construct aesthetic footbridges at the expense of economy and the built structure should serve the purpose, for which it was built, effectively. A few aesthetic footbridges that had serviceability problem of vibration are explained along with the remedial measures. The current trend is to build footbridges based on biomimicry- which will result in these looking differently and mimic natural things but also will be safe, efficient, economic, and sustainable.