Resurgence of Aluminium in Structural Engineering 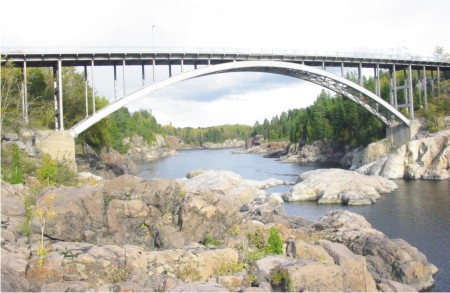 S. K. Ghaswala, Consulting Engineer, Mumbai
More than half a century ago this author presented a paper on "Basic Concepts of Structural Theory of Aluminium Alloys" at the 4th Congress of IABSE (International Assoc. of Bridge and Structural Engineering) at London and Cambridge in August/September 1952. This was followed by another paper on "Some Aspects of the Plastic Design of Aluminium Structures," published in Vol 16 of IABSE Congress at Zurich, Switzerland in 1956. These two papers together sought to unify the basic principles for design of aluminium structures and tended to establish this light metal as a distinctive structural material as was known half a century ago. Since then progress was rather limited except for its use in 'aircraft structures and to some extent in the framework of railway coaches.

Currently, there has been a resurgence of this metal due to a deeper understanding of its design theory as well as the availability of a larger variety of alloys with enhanced strength. A synoptic review of these aspects is presented here by first evaluating the basic differences in steel and aluminum and then briefly highlighting the importance of buckling, torsion and plasticity, in order to stress the need for designing aluminum differently from steel and not merely copying it. This is followed by the applicapability or otherwise of aluminum in different types of bridges; jointing techniques and some interesting and unique applications of aluminium indicating the versatility of this metal. The article ends with a digress on futuristic trends on how aluminium will shape up and show its radiating potencies in the years to come in the domain of structural engineering in construction industry. 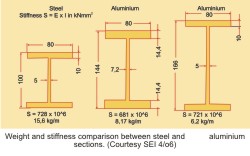 The Structural design of aluminium is distinctly different from that of steel mainly because of its differing physical and mechanical properties.

Aluminium melts at 600°C as against steel at 1500°C, requiring careful consideration during welding.

Aluminium resists the ravages of time, temperature, rust, humidity and warping adding to its long life-cycle.

In comparison with steel the cost of machining and shaping aluminum is just l/9th of steel and canthis form a deciding factor in its selection.

Aluminum, unlike steel, is available in a variety of strengths tempers, mechanical properties as a well as shapes, such as extrusions like bulb angles and channels, top-hat sections and squat and I sections.