AFCONS infrastructure Limited (which is the Infrastructure wing of M/s Shapoorji & Pallonji Group) recently executed its first bridge project in Dubai. It consisted of three prestressed concrete bridges at Nad-al-Sheba (horse and camel) Race Course, for Roads and Transport Authority (RTA) Dubai. During the execution, the team members faced various problems and creative solutions were devised. However, the project was completed in record time, fetching appreciation from the client. Various techniques adopted and other technical details of the project are presented in this paper. 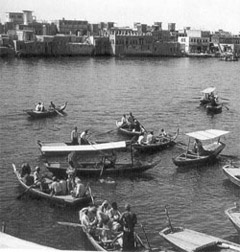 Figure 1a: A scene of old Dubai
Dubai, one of the seven emirates was just a small fishermen colony, about fifty years ago (Fig.1a). But in the past 35 years, i.e. after the formation of United Arab Emirates (UAE), Dubai has developed by leaps and bounds. Dubai has become a hub for foreign Investors. Dubai is known for its modern structures, rapidly growing civilization, foreign-tourism and trade. It is one of the seven emirates of the UAE where maximum investment and developments have taken place. Ambitious projects like Burj-Arab tower (Burj-Khallifa), Burj-Dubai, Palm-Island, World-Island and several other upcoming projects (See Fig.1b) challenged the entire engineering community. The local government authorities are coming up with projects that continuously challenge the engineer and modernize the 'habitat' in Dubai. But since 2007, Dubai is experiencing very challenging situation because of the global slow-down.

Afcons, being one of the pioneering construction companies of marine structures in India and getting diversified in other sectors of construction like Infrastructure, Nuclear and Industrial etc., was keen to participate in the international bid floated by RTA, for the development of Nad-Al-Sheba race course. As the tender was on International level, construction companies all over the world had participated in it. But finally RTA shortlisted Afcons, as the technical and financial bids were most competitive. Though it was not a new experience for the company to work on foreign soils, the responsibility to fulfill the expectations of RTA was a challenge before the project team. (Afcons already had a considerable experience in International projects at locations such as – Mauritius, Madagascar (Africa), Ruwais (Abhu-Dabhi), Iraq etc., but mostly in the marine sector.) As RTA was considered as a strict client to work with, Afcons was alert during each phase of construction.