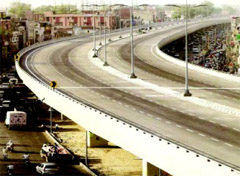 Panipat, the war city of India situated at 90 km from National capital,Delhi, has a glorious past in the Indian history. It is said that at the time of battle of Mahabharat one of the five villages which were demanded by the pandavas was "Panpat” which was later on renamed as Panipat. Three major battles were fought at this place in 1526, 1556 and 1761. Panipat is famous in India by the name of “City of Weaver.” Panipat district has significant place in international market for “Handloom products.” It is also the biggest centre for shoddy yarn in the world.

National Highway No. 1 connecting Delhi-Panipat-Ambala-Amritsar and going upto Indo/Pak border is a very important National highway and connects northern part of the country including states of Jammu and Kashmir, Punjab, Himachal Pradesh and Haryana with Delhi and rest of the country. In eventuality of war, this road also serves as a vital link to Wagha border area as Delhi Cantonment, Ambala Cantonment and Jalandhar Cantonment are situated along side this road. As a result traffic intensity on the road is very high. The project section through Panipat is a serious bottleneck to the speedy, smooth and safe flow of traffic mainly on account of congested ypes of traffic due to Panipat being an industrial city.

The Panipat Elevated Expressway Project (PEEP) has come up in the heart of Panipat. The entire stretch between km 86.000 & 96.000 has been been developed to a 6 lane access control highway with elevated 6 lane structure from 88560 to 92160. This 3.6 km flyover is the longest 6 lane flyover in India till date. This Built Operate and Transfer (BoT) project has been executed by L&T Panipat Elevated Corridor Limited (L&T PECL). National Highways Authority of India (NHAI), New Delhi has alloted a 20 year concession to PEEP to finance, design, built, operate and maintain this new bridge. It is the first BoT project completed 6 months ahead of schedule.

The 3.6 Km long flyover is the longest 6 lane flyover in India, built by utilizing state of art technology. The foundation of this bridge consists of 1282 piles done by rotary rig method over which pile caps and piers have been built upon. I-Girders have been pre–cast at the base camp and transported to site in specially modified trailers, where the erection work has been completed using Gantries and high capacity cranes.

For the first time in India, precast deck slabs have been used as a load bearing member in combination with cast-in-situ. This has most efficiently led to time and cost reduction for completion of the project. Photographs 1 & 2.

The project also included widening of roads from 4 lanes to 10 lanes in the project area. Throughout the stretch flexible road has been provided apart from Toll Plaza where rigid pavement has been constructed. The minimum crust thickness for the entire stretch is 695 mm.

In order to provide interconnectivity to peripheral road on either side of the access controlled main carriageway three underpasses have been provided at Ch: 87.365, Ch:91900 and Ch:93.600 with a maximum length of 850 mts. These Underpasses have a minimum vertical clearance of 5.5m with 20m effective span to accommodate 4 lane divided carriageway with median and 1.5m footpath on either side.

For lighting purpose twisted decorative poles with bird wings have been imported from malaysia, which gives an added lure to the project. These poles have been used for the first time in this part of the country.

A 20-lane Toll Plaza has been constructed at Ch: 94775 with all the modern facilities imported from European Countries. It has the provision of smart cards for local vehicles as well as provision for automatic classification of vehicles. Proper and adequate lighting as well as Safety measures have been ensured at this location. Rigid Pavement (Pavement Quality concrete) has been done in Toll Plaza area from Ch: 94775 to Ch: 95118. Photograph 4.

Landscape treatment of the project section has been undertaken through planting of trees and ground cover of appropriate varieties.

Shrubs of low height have been planted in the median of the project section.

It is India’s first BoT project to be completed well ahead of schedule and the credit for the early completion goes to:

Major Utility Shifting was done on riority basis which has resulted in achieving the progress without major hindrances at site.

The biggest hurdle for the project was management of traffic at site. As mentioned, Panipat is an industrial city located on the busy NH-1. So, there is a vast mix of traffic ranging from bullock carts and cycle rickshaws to heavy industrial vehicles. Hence, it was compulsory to have a well developed traffic management plan so as to work smoothly as well as smooth passage of vehicles. Traffic Management at this site has been one of our biggest achievement and we have been able to achieve proper and safe movement of traffic as well as applaud from local public and administration. A survey carried out during construction period even indicated that the average speed of Vehicles in the project stretch increased in comparison to the speed before start of the project.

For the first time in India, precast deck slabs have been used as a load bearing members in combination with cast-in-situ. This has most efficiently led to early completion of the project.

Precast Girders & Parapet have been used for reducing the duration of superstructure completion which has led to time saving for the project.

This project has given relieve to the commuters passing through the stretch as well as people of Panipat from the endless traffic jams and will usher in an era of growth and prosperity. As mentioned it is the most critical stretch in this section and it used to take up to an hour for crossing this stretch before construction of this flyover. Trade and commerce will also touch new high with faster transportation of goods and services.

It is indeed a great example set by India’s largest engineering and construction organization in completing this landmark BoT project well ahead of schedule. This remarkable and rare feat has been achieved only due to proper planning of the job and advanced construction techniques utilized by L&T. Once again L&T has proved that it has the capabilities and commitment to make enduring contribution to roads, highways and bridges-the lifelines of nation.