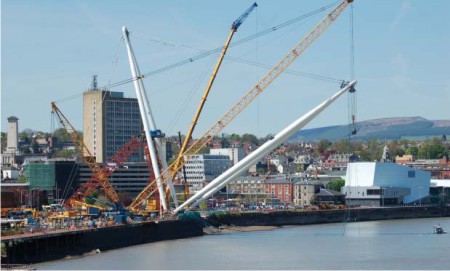 The Newport City footbridge a pedestrian/cycle bridge over the River Usk in the city of Newport, United Kingdom, was officially opened in 2006. It is the first major project to be delivered as part of Newport’s multi-million pound regeneration programme.

The bridge forms a key part of Newport’s regeneration plan. The bridge has won a design award from the British Construction and Steelworkers Association; the George Gibby Award 2007 by the Institute of Civil Engineers in Wales; the regeneration award by the Royal Institution of Chartered Surveyors in Wales as well as a highly commended by Wales Business Insider for the best regeneration project of 2007. 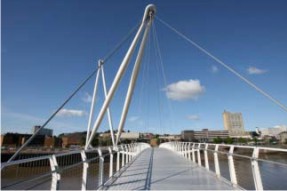 With no access from the river, restricted access on the ease side, and buildings right next to the west side, assembling and installing the bridge components would be one of the major challenges for the contractors. Main contractors for the footbridge were Alfred McAlpine; and the bridge fabrication and erection contractor were Newport-based Rowecord Engineering Ltd. The design team was led by Atkins special structures group, with architects Grimshaw providing the concept and design services.

Work on the bridge began on May 2006 when contractors Alfred McAlpine started to lift the 850 tonne bridge into position with the assistance of the tallest crane in the UK (over 100 m/328 ft), which itself arrived on 48 articulated lorries and took four days to assemble at site, weighing nearly 1,400 tonnes – the equivalent of 70 double decker buses or three jumbo jets full of passengers.

The bridge features two A-Frame masts, which support the bridge from the west bank. The masts are positioned on a shared foundation and anchored at ground level by two 4¾ inch (120mm) diameter cables that are connected the tips of the masts. The forward mast is 262 feet long (80 metres) and the back mast is 226 feet long (69 metres). Because of the angle at which the masts are positioned, the bridge stands at 229ft (70m) above ground. The deck is 16 ft wide (5 metres) and 13½ft (4.1 metres) above water at high tide. The bridge has a clear span of 476 ft (145m).

The dramatic crane structures were designed as a deliberate and symbolic link to the site’s earlier use as trading wharves – but with a modern twist. The deliberate location of the main structures on the west bank means that the vast majority of the construction work was kept away from the houses on the east bank, while avoiding impact on the local river ecology.

The bridge foundations are supported by 30, 35½ inch (900mm) diameter CFA (continuous flight auger) piles varying in length. The bridge structure is suspended on five ground anchors which are drilled 98ft (30m) into the ground. Approximately 20,000 cubic ft (600 cubic m) of concrete were used in the bridge foundations.

The Masts & the Decks 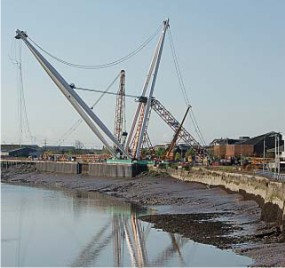 The bridge deck is made up of five sections. The deck units were installed in sequence and then welded together. A ½mile (800m) of cable is used to support the bridge, varying in diameter from 2in (50mm) to 4¾in (120mm).

The balustrades are formed from nearly two miles (three kilometers) of stainless steel wire. The bridge deck is fitted with 178 lights and the mast bases, back anchor and masts are illuminated by 36 floodlights and up-lighters.

The footbridge significantly improves access to the city centre from the east of Newport, reducing journey times for pedestrians and cyclists and encouraging more environmental friendly modes of transport– helping Newport become a greener and cleaner place in which to live.

With a durable five metre wide non-slip aluminium deck, the bridge has been designed to be as user-friendly as possible; imaginative lighting increases the sense of safety and security for users - as well as providing dramatic illumination of the bridge at night.