About 6:05 p.m. central daylight time on Wednesday, August 1, 07, the eight-lane, 1,907-foot-long I-35W Highway Bridge over the Mississippi River in Minneapolis, Minnesota, experienced a catastrophic failure in the main span of the deck truss. As a result, 1,000 feet of the deck truss collapsed, with about 456 feet of the main span falling 108 feet into the 15-foot-deep river. A total of 111 vehicles were on the portion of the bridge that collapsed. Of these, 17 were recovered from the water. As a result of the bridge collapse, 13 people died, and 145 people were injured. On the day of the collapse, roadway work was underway on the I-35W Bridge, and four of the eight travel lanes (two outside lanes northbound and two inside lanes southbound) were closed to traffic. In the early afternoon, construction equipment and construction aggregates (sand and gravel for making concrete) were delivered and positioned in the two closed inside southbound lanes. The equipment and aggregates, which were being staged for a concrete pour of the southbound lanes that was to begin about 7:00 p.m., were positioned toward the south end of the center section of the deck truss portion of the bridge and were in place by about 2:30 p.m. About 6:05 p.m., a motion-activated surveillance video camera at the Lower St. Anthony Falls Lock and Dam, just west of the I-35W Bridge, recorded a portion of the collapse sequence. The video showed the bridge center span separating from the rest of the bridge and falling into the river." 2

Figure 1: I-35W Mississippi RiverBridge(1967 – 2007) of Minneapolis, MN.1
The I-35W Mississippi River Bridge was constructed in 1967 to serve Interstate W35 traffic in Minneapolis, Minnesota. The bridge was provided with eight lanes for traffic which in 2007 numbered about 140,000 vehicles a day. The bridge was designed by Sverdrup & Parcel and Associates of St. Louis, Missouri in accordance with the 1961 AASHO (American Association of State Highway Officials) specifications. It consisted of two, three-span continuous deck trusses, six continuous steel-girder approach spans, two steel-beam approach spans, and three concrete voided-slab approach spans. Abutments and piers were of reinforced-concrete construction. On August 1, 2007, after nine days of high temperature that averaged about 90º, the bridge suddenly collapsed. 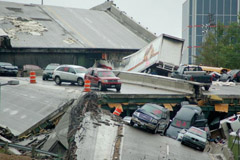 Figure 2: Collapsed sections of the I-35W Mississippi River Bridge.
Photo courtesy of Tim Davis.
After this collapse, the National Transportation Safety Board (NTSB) was given the responsibility for investigating this national tragedy. The report of the board was completed and published about a year later. The abstract of the report described the event as follows.

The content and especially the conclusion of the NTSB Report on the collapse of the I-35W Bridge is shocking to an engineer who has spent almost his entire fifty-year career evaluating the behavior of real bridges. Upon examining the contents of NTSB report, the author discovered that the investigation was elementalistically focused on the behavior of only one part of the complete or "composite structure," its deck truss system (see EXHIBIT A). Missing from the investigation was any awareness of the behavior of the other parts of the composite structure (six steel-girder approach spans, two steel-beam approach spans, three concrete voided-slab approach spans, two approach embankments, two approach concrete highway pavements, substructure foundations, etc.), or how the behavior of these other parts of the structure, taking into account the forces associated with them and their various application orientations, would impact the behavior of the overall structure. Consequently, the NTSB investig- ation appears to have been merely an academic exercise that focused only on the response of a deck-truss system to hypothetical vertical loads.