It will not be a hyperbole to say that the rage of being a record holder in a respective field is tremendously growing day by day and encouraging people to accept the innovative ideas, techniques,and resources available in the market to fulfill their dreams. Mariya Rasheeda scans some of the distinctive bridges, that hold record in their respective field.

The construction or an infrastructure boom throughout the world has given the chance to the equipment and machinery manufacturers to understand the requirement of the builders, contractors, designers and architects, who are fully enthusiastic to present some innovative ideas, which attract the attention of the whole. To provide a shape to their visualization they look towards the manufacturers for their state-of-the-art equipment and machinery and latest technologies which reaches higher, deeper or longer as per their requirement. So it is not wrong to say that this is the brilliant opportunity for the who and who of the construction industry.

If on one hand, Burj Dubai has logged its name for being the tallest building in the world by breaking the record of Taipei, than on other hand Hangzhou Bay bridge has earned the distinction of being the longest trans-ocean bridge in the world, leaving behind Donghai Bridge in Shanghai, the previous world record holder of being the longest cross-sea bridge, completed in 2005. 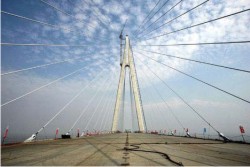 Hangzhou Bay Bridge is a cablestayed bridge across Hangzhou Bay off the eastern coast of China. It was linked up on June 14, 2007 and connects the municipalities of Shanghai and Ningbo in Zhejiang province. Construction of this bridge started in 2003. The bridge is the longest trans-oceanic bridge in the world, although it does not have the longest cable-stayed main span. The opening ceremony was held in 2007 with great domestic media publicity, though the bridge would only be used for test and evaluation purposes and not be available to ordinary public transportation. The bridge is expected to open for traffic before the 2008 olympic games. The S-shaped Hangzhou Bay Bridge will shorten the ground transportation distance from Ningbo to Shanghai by 120 km and travel time from four hours to two hours.

The Hangzhou bridge is 36 km long with six expressway lanes in two directions, making it the second-longest bridge in the world after the Lake Pontchartrain Causeway in Louisiana, USA. The bridge has two main spans, with a 448 metre northern span, and a 318 metre southern span. The designated speed is 100 kilometers per hour, and the designed longevity is more than 100 years. The total investment on the bridge is 11.8 billion yuan (US$ 1.5 billion). 35% of this amount was raised from private companies in Ningbo, 59% was provided as loans from China's central and regional banks. Orthotropic steel deck is used on its main spans and five ramp bridges, and is to be paved with 50 mm epoxy asphalt concrete.