Fast Track Design and Construction of Bridges in India 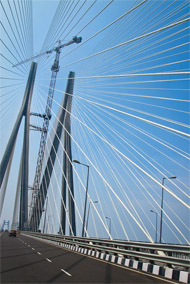 Over the last 150 years, India witnessed glorious opportunities in the field of Bridge Engineering. The advent of Railways in India necessitated bridging major rivers. Well foundations were extensively adopted for alluvial rivers. Elsewhere Cast Iron Screw piles formed the foundation for many Railway Bridges. There are also success stories of non conventional foundation systems. Bridges were constructed across rivers not subject to significant scour with piers resting on a rubble apron spanning between the abutments.
Early Bridges were mostly of stone or brick masonry arch. Longer spans were constructed with steel deck; this was followed by Concrete- plain, reinforced and prestressed- during the first half of the Twentieth Century. Alternate Designs by Contractors for Road Bridges facilitated fast track, economic construction of bridges between 1920 and 1980. The first ever bridge in Prestressed Concrete for the Assam Rail Link was completed in seven months (1949). The 3.2km long Sone Bridge at Dehri on Sone was designed and constructed in 33 months (1965)
The Indian Roads Congress Standard Specifications and Code of Practice for Road Bridges in India was published in 1937. Successive revisions over the years reflected improvements but at the same time introduced conservatism, increased cost and time. Construction of third and fourth Lanes of the Sone Bridge at Dehri on Sone 40 years after the original construction in 1965 took nearly double the time to complete with deeper well foundations!
Desired Advances in Design: Continuous Decks are preferred for economy, riding surface and fast construction. Indian designers are obsessed with differential settlement of foundation and prefer simply supported deck, with attendant riding surface problems. Elsewhere continuity of deck has been established for upto one km length of deck with suitable expansion joints. Drain pipes embedded in deck slab are unsatisfactory; the pipes get clogged in the absence of regular cleaning, water stagnates, leads to corrosion of steel reinforcement. The international practice is to provide longitudinal slope from the center both ways, collect the rain water behind the abutments and drain away.
Wearing coat: Both concrete and mastic asphalt has been tried with varying degrees of failures. Concrete wearing coat cracks because of wafer thickness. Mastic depends on quality of cooking and workmanship and needs frequent replacement. Generally wearing coats are used to hide the workmanship deficiencies during deck concreting. A better alternative is to provide the deck in high grade concrete with greater cover on top, and use mechanical vibratory screeds for compaction and surface accuracy. The Author was involved in construction of bridges in Nepal in the Eighties. There was no wearing coat; instead, the top cover to the reinforcement was increased. The bridges are performing satisfactorily to date.
Deck Configuration: A new six lane bridge across Godavari is underconstruction near Rajah- mundry. There are two options of a single deck or two 3-lane decks on separate foundations. The later option was adopted by the EPC contractor. This option necessarily increases time and cost of construction, though dictated by other considerations during design.
Almost all the long span bridges in PSC cantilever with either central hinges or short suspended spans are in distress due to excessive deflections and total lack of inspection and maintenance of the central hinges. Fortunately, designs with central hinges are no more in vogue. Continuous spans are the norm. Quality of steel in Hinges is poor & needs higher Grades. Bassein Creek Bridge (1970), is the first long span continuous bridge in India constructed by in situ segmental method. Since then a large number of bridges have continuous spans.

Bus crashed thro railing of a bridge near Mumbai, killing 30 in 2006
Bridge Deck Furniture: Railing is not designed to absorb vehicle impact; accidents involving crashing of buses through fragile railing and casualties are only too common in India. Of late crash barriers are installed in important bridges. The IRC Codes and Specifications need revision.
Expansion Joints: There are too many expansion joints in Indian bridges, resulting in riding quality problems. Most of the bridges in India are simply supported, involving additional joints. The nearly 3km long flyover at Sirsi Circle in Bengaluru was completed in 1999. The flyover was in good condition since its construction for about five to six years. However, in the last three years, the expansion joints have deteriorated due to lack of maintenance. They are being replaced at a cost of Rs.2.67 crores, will take three months to complete (Bangalore Mirror Aug 23, 2011). Similar situation prevailed in a bridge across Yamuna in Delhi where the expansion joint had to be replaced within a few years of commissioning.