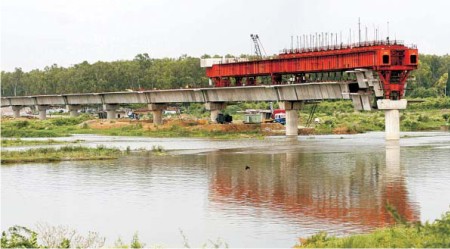 The building of the two-track metro rail bridge across Yamuna exemplifies the expertise, planning and attitudinal excellence that has gone into the making of the Shahdara-Tis Hazari section of the Delhi Metro Rail Network.

The state-of-the-art 553 metres long continuous, single pre-stressed box girder, for two tracks across the river Yamuna, was completed in 2001 in a period of just 30 months by using, Incremental Launching’ – a special technique, used prior to this only in the construction of the Panvel Viaduct of the Knokan Railways. 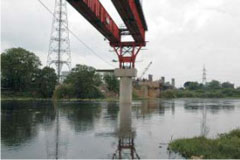 The technique involves the construction of the bridge in segments, as opposed to constructing it in irregular parts. The entire segment is first cast on a casting bed and then pulled over the pillars of the bridge by ‘jacking. The segments were cast, prestressed and launched in increments of 23.20 metre (halfspan) each time. Total of twenty five segments were cast and launched at an average cycle time of 12 days per segment and a total weight of 15,000 metric tons was pushed by the two 400 ton capacity synchronized hydraulic jacks during final launching. The construction technique is ideal for busy cities because it allows construction without any major disruption of traffic. Since the bridge is advanced by sections, unlike conventionally built bridges, there are no joints and this has also ensured a smoother bump-free journey for commuters. 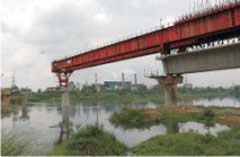 The bridge is founded on pile foundation for P16 and abutment, and on 40 metre deep wellfoundation for rest of the piers. Air-jetting, water-jetting and other modern methods like ‘Jack-down’ were used for sinking the foundations of the one metre thick and ten metre wide RCC wells. Since the length of the bridge kept moving forward section by section during construction, the Delhi Metro Yamuna Bridge has earned for itself the epithet, ‘moving bridge.’

The making of the rail and metro corridors have provided a challenging ground for setting innovative benchmarks in the field of civil engineering. This includes the construction of two Box Tunnel Subways for allowing cars, scooters, light vehicles and pedestrians to pass through safely

near the Welcome and Seelampur Metro Stations. The 3 metres high, 6 metres horizontal and 30 metres long boxes were inserted below the existing Northern Railway tracks without disturbing the train movement of Northern Railway. This astonishing feat was achieved in a record number of 22 days in the case of the Seelampur Box Tunnel.