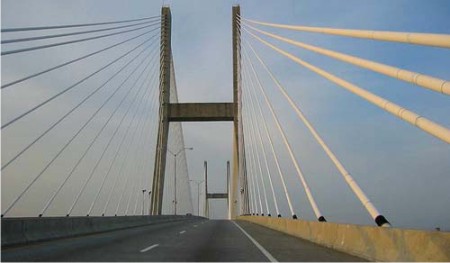 The evolution of the modern cable-stayed bridges took place almost exclusively in postwar Germany in the early fifties. Since then, it has become increasingly popular in many countries because of its remarkable structural efficiency as well as its aesthetically pleasing appearance. As opposed to the classical suspension bridge, the cable-stays are directly connected to the bridge deck resulting in a much stiffer structure. A large number of closely spaced cablestays support the bridge deck throughout its length, reducing the required depth and bending stiffness of the longitudinal girder to a minimum, thereby allowing the construction of relatively longer spans. The structural action is simple in concept: the cables carry the deck loads to the towers and from there to the foundation.

The primary forces in the structure are tension in the cable-stays and axial compression in the towers and deck; the effect of bending and shear is considered to be secondary. The early designs of modern cable-stayed bridges essentiality consisted of a stiff girder supported by a few cables. The stay- forces were rather large and consequently the anchorage design was excessively complex. Further development indicated that these problems could be eliminated by increasing the number of stays. The multi-cable arrangement has following advantages: 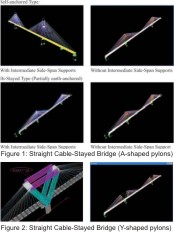 Excellent seismic stability is obtained as the damping of the system is increased by adding a large number of cables of different lengths with different natural frequencies. The seismic stability of the pylon is another important consideration. Very few researchers have worked on this as many of the cable-stayed bridges are in active seismic regions. When the slender deck of relatively flexible long span structure is subjected to seismic excitation, depending upon mass distribution of deck, cable and pylon tend to induce both torsional and flexural oscillations in the bridge deck. Another problem associated with earthquake is that two earthquakes have not similar finger print. All earthquakes have different peak ground acceleration, different duration and direction. Use of different shapes of pylon create different length, inclination and plane of the cables, this results into complex behavior during seismic excitation.

Many researchers (Table:1&2) have tried damper and isolation mechanism for absorbing seismic excitation, but still the problem of controlling deck oscillation during seismic excitation prevails for long span cable-stayed bridges. In additions to these, cable-stayed bridges exhibit a nonlinear structural response, principally because of geometric nonlinearity of stay-cables and combined bending moment and axial force effect in the deck and towers. These considerations require relatively sophisticated analysis procedures.

Looking to the increased popularity of cable-stayed bridges, it is obvious that there is a need for more comprehensive investigations of analysis and design of these contemporary bridges. The present general trends are two: one towards increasing center span length of cable-stayed bridge and second towards implementation of different aesthetical and functional shapes of pylons. Moreover, in view of the literature survey, the lack of research is found particularly in 3-D earthquake analysis of alternate bridge systems considering different shapes of pylon, under different duration, peak ground acceleration and pulse shape of seismic time histories.

For all three seismic time histories displacement centre of deck (Table:5,6,7) in y-direction (lateral) is maximum medium in zdirection (vertical) and very less in the case of x-direction (longitudinal). In self-anchored type bridge, intermediate side span supports are ineffective in controlling centre deck displacement during seismic excitation. These end supports reduce axial cable forces in inner and outer cable. They also reduce bending moment at base of the pylon. 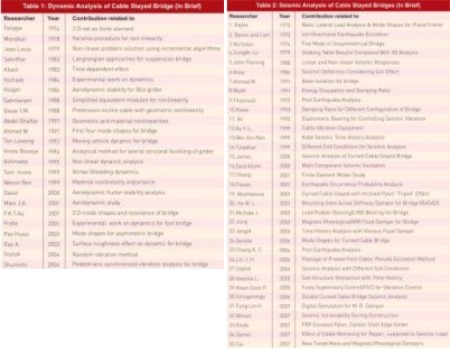 It is observed that Bi-stayed Bridge gives less amount of cable forces (Fig:4,Table:8)in comparison to self- anchored type. It has also less amount bending moment at base of pylon. This reduction is in x- (longitudinal direction) and y- (lateral direction) for the condition of without ISSS. Outer cable forces are not under much influence of bi-stayed cable effect, for all seismic time histories.

Bhuj, Koyna and El-centro earthquakes (Fig:3, Table:4)are almost having similar magnitude (Range 6.5 to 7.7), but all three have different duration, different PGA value at different peak times. Even all three have different pulse shapes of acceleration vs time diagram. Bhuj time history has wide spread peak distribution between 40 to 47 sec, while Koyna short duration time history is having almost uniform wave form gives peak between 3 to 6 sec. El-centro medium duration time history is having impact type of pulse shape creates peak between 3 to 5 sec. In short, no two earthquakes are similar and very complex behaviour of spread pylon cablestayed bridge is noticed.(Fig: 6,7,8) Even peak value for B.M., S.F. and central deck displacement occur for all above three earthquakes at different time. It is narrated in the Table:9,10,11

It is observed that for spread angle μ = 300 pylon gives good seismic performance with compared to μ = 00 (Conventional Bridge). (Table:9,10,11) For long span bridge of 605 m pylon gives lowest value of maximum B.M. & maximum S.F at pylon base. For proper understanding of seismic behaviour of spread pylon cablestayed bridge, variety of time histories like short, medium & long duration having different PGA value & different earthquake magnitudes are essential. Spread angle of pylon μ = 300 gives normally reduction of deck oscillation with compared to μ = 00 (Conventional Bridge). Application of dampers between bottom of deck and top of deck beam of pylon reduce deck oscillation in all types of spread pylon cable stayed bridges (μ = 00, 190, 300). Improvement of dynamic behaviour of spread pylon cable-stayed bridge is observed with higher spread angle of wings of pylon. This is because of more stiffness of the structure due to less length and more verticality of cables.

The Proposed “Earthquake- Displacement Ratio” (EDR) is defined as ratio of maximum seismic displacement to maximum static displacement. These both displacements must be at the same point. Earthquake-displacement ratio can be evaluated as seismic The mathematical formulation can be classified in to three parts: 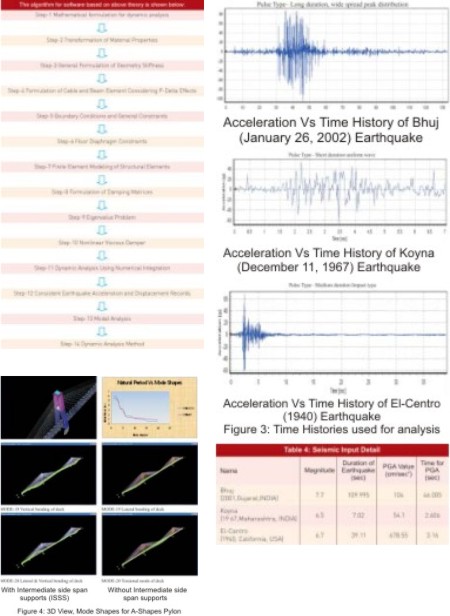 damage indices.(Table:12) As indicated above, the ratio is considered for central point of deck (mid span) in vertical direction. EDR ratio for Bhuj, Koyna, El-Centro was in the range of 1.3 to 1.5, 0.3 to 0.7 & 4 to 4.64 respectively. As El-Centro P.G.A. is almost six times higher than that of Bhuj P.G.A., higher EDR observed for El-Centro is justified. “EDR ratio in lateral direction” for spread pylon cablestayed bridge is indicated in Table:12. During Earthquake, lateral oscillation plays important role for stability of bridge. EDR for El-Centro earthquake for spreadpylon cable stayed in all three inclinations of pylon (0°,19°,30°) are higher in comparison to Bhujand Koyna. The elasto-plastic damage of long span spread pylon cable-stayed bridge caused bystrong ground motions is associated with their own structural dynamic properties and the characteristics of earthquake records. The elasto-plastic seismic damage index called the “Earthquake Displacement Ratio (EDR)” proposed in this thesis, which is a local value of damage index, provides a measure of elasto-plastic seismic damage or ductility at the element level. It can be used in the evaluation of damage during elasto-plastic seismic response analysis. The EDR is particularly suitable when the Nonlinear Finite Element Method is used in elasto-plastic seismic analysis. 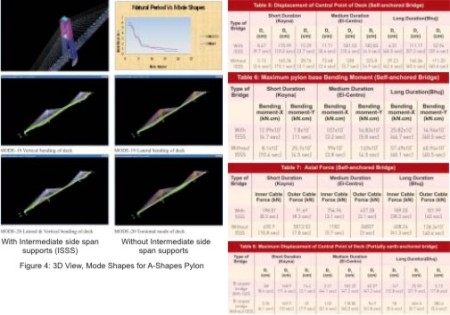 There is some relationship observed between E.D.R. value and P.G.A. of seismic input time histories. EDR value can be considered as quick damage assessment parameter. The relationship obtained can be used for finding displacement at centre point of deck for any unknown P.G.A.

For long span cable-stayed bridge, there is some relationship observed between P.G.A. and E.D.R. for vertical and lateral direction. 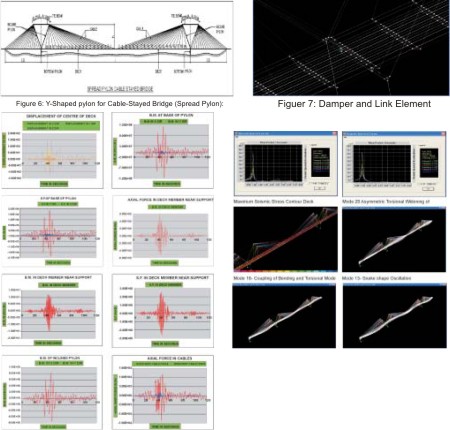 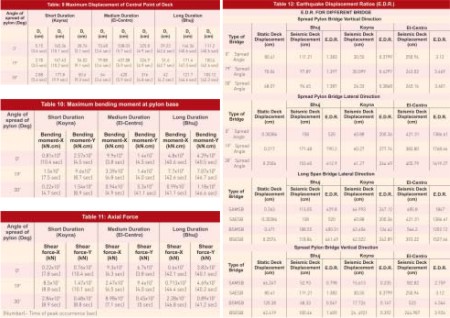 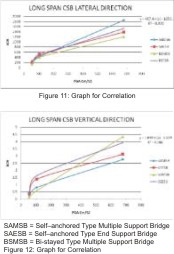