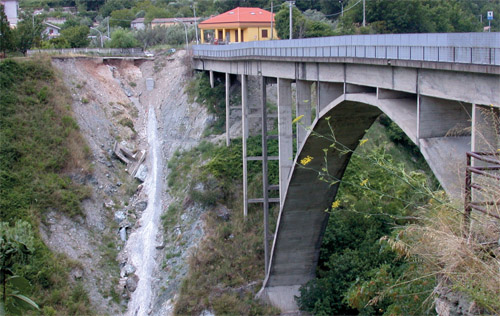 This work was one of the boldest kind of Maillarts ever made by Adriano Galli. This is the first example of arched road bridge, made of reinforced concrete and with stiffening deck in the South of Italy. This is over 170m length with two access viaducts, consisting of three-deck continuous beams on four sturdy supports and a very solid slender central arch of 80m. The disruption that caused the unavailability of the bridge had posed forcefully two essential questions: the first one purely functional and "utmost urgency," the second one of cultural and philosophical nature for the need of seismic rehabilitation increasing its functions. The urgency was to resolve at an early stage to quickly make the bridge fit for use again, at least for traffic of light vehicles. The re-functionalization, carried out in the second phase was aimed at adjusting the crossing to the new task, eliminating the mixing of pedestrian and vehicular traffic while simultaneously performing seismic retrofitting of the bridge.

Limited transit to light vehicles was ensured even during seismic retrofitting of the bridge which needed its temporary closure to traffic.

The bridge built by Adriano Galli, though damaged, still appears today sleek and majestic connection of the two top sides of Corace river. The work is characterized by its clear and simple light shape.

The static approach on the structural aspects of architectural design, in this case, was characterized by the binomial form and function maintained, even after rehabilitation. These binomial features were clear formal lightness of original work of Galli.

The two phases of general project provided the measures needed to reopen the bridge to traffic as a first stage, and later, the functional enlargement of two walkways to the central lane. The overall intervention was planned in two coordinated phases of execution, subsequently linked by a dichotomous relationship within very compelling logic.

Figure 1: Bridge over Corace at the end of works

Figure 2: Re-functionalization of the crossing

The first phase of the project involved the construction of new hydraulic right shoulder, already prepared to receive pedestrian enlargements, in addition to general strengthening and lifting of the deck. This was to avoid substantial interruptions of traffic, in the second phase of the intervention.

The second phase of the intervention consisted of creation of a box-shaped/metal mesh structure with piers. This offered metal spatial network structure with a new deck supports, in lieu of abandoned piers of the viaduct and simultaneously resisted the thrust of concrete arch and also supported the development and enlargement of the pedestrian area.

These two new bridge decks supported by longitudinal trusses, alongside the existing bridge, and supported by a pair of "powerful arms" as if to reinterpret the Athlas's myth. Their function is twofold, first allowing the passage of light vehicles during the work of consolidation of the existing bridge, thus maintaining the continuity of vehicles. Finally when completed, served as a wide pedestrian path, to allow the pedestrian facing upstream and downstream to enjoy breathtaking panoramic views from a kind of bridge-square and place of rest.