An Overview of Modern Chinese Bridges 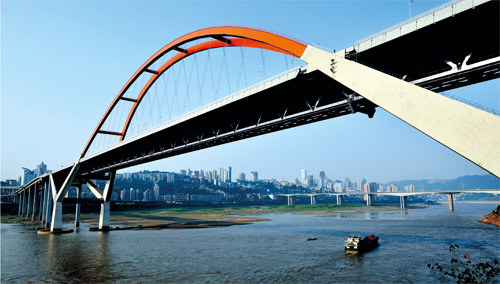 Man-Chung Tang, Chairman of the Board T.Y. Lin International, USA

The modernization of China began around 1976. In this vastly huge country at that time, China had only a few major bridges. The more well-known ones are, the Qiantangjiang Bridge near Hangzhou Fig. 1, which was built in 1937 (before the World War II); the First Wuhan Yangtze River Bridge, which was completed in 1957; and the First Nanjing Yangtze River Bridge, which was completed in 1968. So, in 1976 there were only two major bridges crossing the Yangtze River, which is the longest river in China and divides the country roughly into two halves.

Infrastructure is the backbone of modernization, and bridges are a major element of infrastructure. Consequently, bridge construction took off as modernization and industrialization increased rapidly after 1976. However, most of the new bridges built during the first decade of modernization were relatively moderate spans, such as the 220m span Yellow River Bridge in Jinan; the 260m span Yonghe cable-stayed bridge in Tianjin; and the 170m concrete box girder, the Old Shibanpo Bridge crossing the Yangtze River, in Chongqing.

Figure 1: Major Bridges built before 1970
The modernization of China called for seven major east-west highways and five north-south highways. Currently, China has about 3.5 million kilometers of highways and 70,000 kilometers of freeways. Undoubtedly, many major bridges along these routes will be built.

Due to advancements in communi- cation and transportation, the world today is very interconnected. Technology can be leveraged and learned in a short period of time. Most construction materials and equipment are commercially available globally. Whatever technology we use to build a bridge in one part of the world can be easily reproduced in any other part of the world. Therefore, the bridges in China are not much different from bridges built in Europe or the United States, or any other country for that matter. The difference lies only in style and/or need.

The basic construction materials used to build bridges today include concrete and steel. The most commonly used concrete in China are C40 and C50, with cube strengths of 40 MPa and 50 MPa respectively. C60 and C70 have also been used but less frequently. The most commonly used steel types are Q235 and Q345 weldable steel with yield strengths of 235 MPa and 345 MPa respectively. These materials are comparable to what most other countries are using.