The 2nd Strelasund crossing, with its length in excess of four kilometres, is currently the largest and longest bridge building project in Germany and is in every respect an engineering challenge for all construction companies involved. Whereas in the past, cost-efficient concrete was used for bridge building, today’s architects are relying ever more upon steel. It is intended to become a landmark for the region, while blending in with the cityscape of the old Hanseatic city of Stralsund. Since August of last year, the construction of the 85 million Euro bridge is proceeding with vigour. The 4,097 metre long Strelasund bridge is sub-divided into around 2,800 metre long bridge structures and around 1.3 kilometres of causeway and road sections. 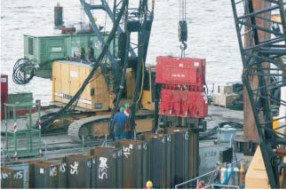 The highest clearance at the so-called Ziegelgraben amounts to 42 metres and is characterised by the 126 metre high pylon landmark.

As a competent partner in the area of steel, ThyssenKrupp GfT Bautechnik was commissioned by the consortium to provide a complete supply of sheet piling for the 450 metre long causeway, as well as for the 20 substructure groundworks of the bridge columns in the water and 17 pillar foundations on land. A further 212 upset end tie rods and 79 hinged anchors for the causeway building and the waling supports for the seafacing side of the sheet pile casings were ordered.

The steel sheet piles were transported to Stralsund in an environmentally friendly way by rail and from the North harbour there, they were taken on to the building site. ThyssenKrupp GfT

Bautechnik was also in demand when it came to pile driving technology. The devices used included the largest variable vibrator in the world, the MS-62 HV, with a 1,000-kilowatt unit. For driving purposes, the Müller MS- 32 HFV and MS-16 HFV continued to be in demand. ThyssenKrupp experts classified the pile driving as ranging from simple to medium. Essentially, the proven HOESCH sections H 1600, H 2500 and H 3600n were used in sealed single and double form for the pillar foundations in water and put into place using conventional top driving methods. The lengths amounted to 13 to 24 metres; the steel quality selected throughout was S 355 GP. The HOESCH sections also provide additional security in the pillar foundations and prevent undermining of the finished pillar. They comply with ENV 1993-5: 1997 of section classification 2 and prevent any so-called “oblique bending” at high water pressure. In the case of the 500-metre long causeway structure, a mixed PEINER sheet pile wall consisting of PSp 1000 DB and EB, PSp 800 and PSp 370 in steel quality S 355 GP was used. The injected piles used were approx. 10 to 14 m long PZi 610 DB, Sol 23, with interlocks only welded at the top. The PEINER system has three prime advantages: the s u p p o r t elements are symmetrical and therefore easy to drive. The P interlocks can handle higher forces and are located on the intermediate plates so that clogging of the interlocks during ramming is prevented. The third great advantage is the 3-hinge system of the intermediate piles. Thanks to this system, small radii of 10 metres can be driven without construction piles. At the head of the causeway, this system was used to achieve advance angles of 11.25 degrees between the 23 metre long DB PSp 1000s without problems. All in all, ThyssenKrupp GfT Bautechnik supplied 6,250 tonnes of steel for the Strelasund bridge “Building of the Century.”

Individually, the causeway construction required 2,300 tonnes of combined Peiner steel sheet piles and 700 tonnes of Larssen double piles. ThyssenKrupp GfT provided around 2,600 HOESCH and Larssen sheet piles for the sheet pile casings facing land and sea, as well as around 400 tonnes of section steel for the building site. On top of that were 250 t of upset end tie rods with a nominal diameter of 2–3 ¾ inches, which were supplied by the Anton Schmoll Company.

ThyssenKrupp GfT Bautechnik was also able to demonstrate comprehensive competence, reliability and creativity in the case of this major building project. Dr. Wolfgang Kruse from the Rostock office and Uwe Hornstein, Manager of the Hamburg office coordinated the building project and praised the contractors: “We would particularly like to thank the supervising engineers and the two pile driving departments for their excellent cooperation and joint solutions of the problems that such major building sites such an interesting challenge, requiring constant creativity.”