In the mega MoU, the Department of Heavy Industries, Ministry of Heavy Industries and Public Enterprise, Government of India has partnered with FICCI, one of the largest and oldest apex business organizations and government advisory, to be the leading agency for executing the partnership for WIN India 2015. The partnership is to work jointly towards promoting India's high-tech engineering and capital goods manufacturing industry as a part of the Government of India's ‘Make in India' campaign.

Addressing presspersons, shortly after formalizing the partnership, Senior Vice President Deutsche Messe AG and Managing Director Hannover Fairs International, Hannover / Germany, Wolfgang Pech, said that the Make in India initiative has generated tremendous positive sentiment and interest from global investors. It is estimated that between April 2014 and February 2015, foreign direct investment in India reached 28.8 billion USD – a 40 percent increase compared to corresponding period in the previous year. WIN India has been successfully working towards the mission of creating more interest in India as a long-term production location for 8 years now. With more global interest in India, and with our partnership with Department of Heavy Industries and FICCI, we hope to further pave the way for investment and partnerships to enhance India's economic engagement with Europe and other global economies. To add to the momentum, Lower Saxony's undersecretary, Daniela Behrens, will lead a business delegation from Lower Saxony to visit WIN INDIA with the specific goal of meeting Indian companies and intensifying Lower Saxony's economic relations with India in December of this year. This is a direct result of India's partner country appearance in Hannover, which is the capital of Lower Saxony. 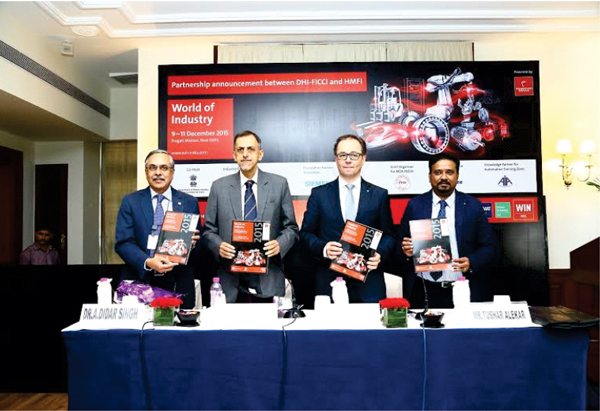 Secretary General, FICCI.Dr. A. Didar Singh, in his address said that India is lagging behind in domestic capital goods manufacturing, which in turn resulting in an increasing dependance on imports in the sector. In fact, capital goods manufacturing is crucial for the development of India's manufacturing ecosystem as it has a multiplier effect on the supply of the equipment and machinery needed to support and encourage the sector's growth. Currently, the capital goods industry contributes a meagre 12% to the total manufacturing activity in the country and that the Ficci is earnestly looking forward to this partnership at WIN India 2015 to promote the Department of Heavy Industry objective of boosting the Indian Capital goods sector, and promoting India's focus on Make in India", he insisted.