Volvo Trucks, a global leader in sustainable transport solutions, saw a record-setting Volvo Trucks Asia Pacific Fuelwatch Challenge 2015 recently. Following an inspiring performance at the grand final in the Thai city of Hua Hin, Louise Marriott from New Zealand was announced the most fuel-efficient driver in the on-road category.

Ms. Marriott became the first female driver in the competition's illustrious history to achieve a podium finish at the event, joining Ravi Poleboina from India who was awarded the most fuel-efficient driver in the off-road segment. In addition to being the first female driver, Ms. Marriott was also the first representative from New Zealand to attain the top prize at the Fuelwatch Challenge.

The competition, recognised as an annual mainstay event in the industry, embodies the company's Fuelwatch mission towards a fuel-efficient industry model. During the event, participants attended a one-day training session on fuel-efficient driving techniques and technical expertise, followed by the Asia Pacific Fuelwatch Challenge grand finale on the second day. 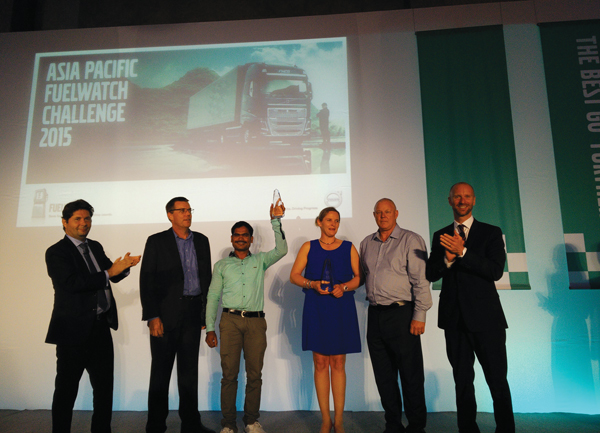 Encouraging inclusive growth
The Volvo Trucks Fuelwatch Challenge kicked-off its local editions in Asia Pacific earlier this year, and saw 17 top drivers qualify to contest for the title of the region's most fuel-efficient driver in the on-road and off-road categories at the Asia Pacific Fuelwatch Challenge 2015. This included four women, representing the expanding number of female drivers within the Fuelwatch community and the industry-at-large.

Expressing her elation over the record-setting performance, Ms Marriott said: "I'm absolutely pleased to be this year's most fuel-efficient driver and to be the first contestant to bring the trophy home to New Zealand. While our industry is often thought of as being male dominated, the Fuelwatch Challenge has been a great platform for us to show that all drivers, regardless of gender, can perform at the highest level while being fuel-efficient. I look forward to sharing the experience at Fuelwatch with my colleagues back home."

Fuelling positive change
To win the title of the most fuel-efficient driver in the on-road category at this year's Asia Pacific Fuelwatch Challenge, Ms. Marriott clocked 17.5% less fuel compared to the highest amount of fuel burnt at the event. In the off-road category, Mr. Poleboina clinched the top prize with a notable achievement of 12.5% less fuel consumption relative to fellow contestants. Within the industry, fuel can account to up to 50% of the operating costs of a typical haulage business. Based on the fuel-efficiency margins recorded in the on-road and offroad finals, this would inarguably translate into significant cost savings potential in a real-world context.

Congratulating Ms. Marriott and Mr. Poleboina on their achievements, Christophe Martin, President of Volvo Trucks in Asia Oceania added: "I am delighted and proud to witness history made at this year's Asia Pacific Fuelwatch Challenge 2015, with the first female driver joining the ranks of past Fuelwatch winners. Louise's achievements will no doubt encourage aspiring female drivers, which will benefit the industry as a whole." Mr Martin further commented: "We at Volvo Trucks are firmly committed to the Fuelwatch mission of optimising performance at minimum cost to businesses, society and the environment. Since our inaugural event in 2007, the more than 15,000 participants of the Fuelwatch Challenge have become ambassadors of the Fuelwatch community, sharing the skills and technical knowledge that they have picked up at the event to catalyse our goal of a fuel-efficient industry. Together with them, we look forward to championing the Fuelwatch mission for the industry and the society".