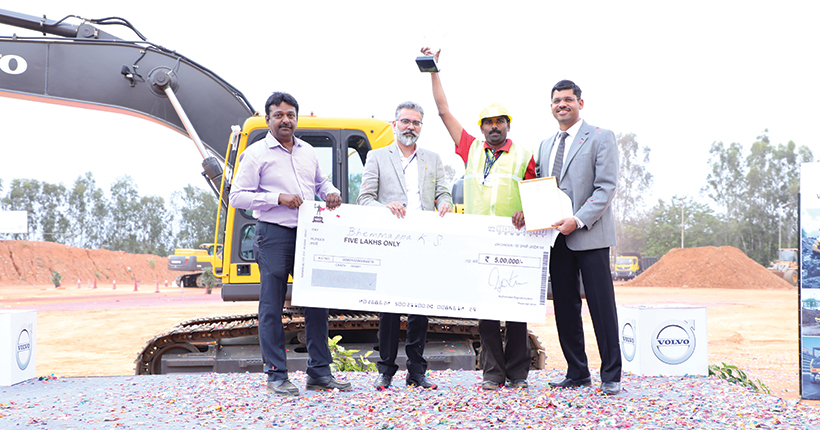 Volvo CE India organized its maiden Indian operator’s championship event recently at its facility at Peenya and Hosakote in Bengaluru. Operators participating at the event exhibited their operating skills on speed of operating the equipment, precision and safe operation, on both live equipment and simulators on Excavators.

Speaking to NBM&CW on the sidelines of the event, Mr. Dimitrov Krishnan, Vice President & Head of Volvo CE India, said, “There remains an immense shortage of skilled operators for advanced equipment for faster development of infrastructure. Shortage of skilled operators inhibits the optimum utilization of the advanced equipment along with deterring deliverance maximum productivity and fuel efficiency, for which the machines are built. Our reason for organizing the operator’s championship is to emphasize the importance of skill development and to do away with the gaps in appropriate operation of the equipment.”

He added, “The event is designed to boost skill levels on job sites and create awareness regarding the most efficient way to operate the equipment, along with improving their efficiency and competence. We have organized the event in regional rounds in nine locations, namely, in Dibrugarh, Assam, Rajasthan, West Bengal, Kerala, and other parts of the country over 18 months, with finals in Bangalore. Each regional event includes educational sessions on machine operation with a focus on safe and efficient operations. Close to 600 operators, are participating in the event.”

The event was attended by Mr. Gaurav Kapoor, Head – Industry Partnership & CSR at SCC Engagements, part of the National Skill Development Corporation. Other participants included senior leader from Volvo, government officials, major construction contractors and representatives from Volvo dealerships. The winner received a cheque of Rs.5 lakh, while the runners up received Rs.2 lakh each along with an Operators Champion trophy. The winner for the first prize was Bheemappa K.S from Karnataka, while Narendra Singh from Rajasthan was the runner up. Volvo CE offers certified operator training course in association with NSDC.