VDMA to enhance manufacturing, distribution and standardization in products with 'Industrie 4.0'. 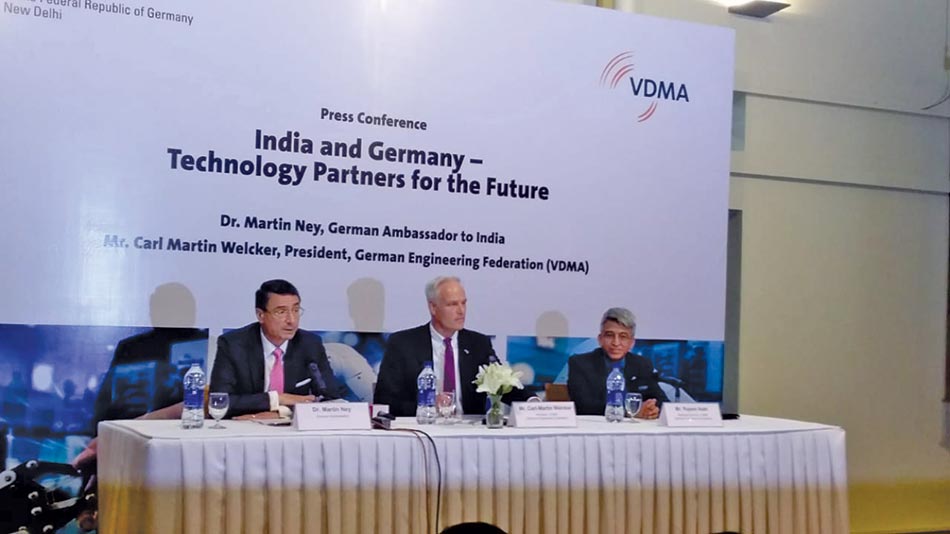 At a press conference organized by VDMA and the German Embassy in New Delhi recently, Carl Martin Welcker, President, VDMA, and Rajesh Nath Managing Director, announced that the company will strengthen its presence in India through advanced integrated manufacturing and distribution processes, including digitization, and bring higher levels of standardization in the products to make them suitable for global use. This would be driven through 'Industrie 4.0', a digitization link that integrates supplies, customers and business partners.

Said Welcker, "Industrie 4.0 will computerize traditional product processes and create a 'smart' factory. This can drive India and Germany to a new technology level. The solutions of Industrie 4.0 can be trailblazers of product innovation, product related services and improved production processes, and thus help reduce production cost and increase sales through bringing out products with added value. Many technologies for Industrie 4.0 solutions are already available, however, the benefits of Industrie 4.0 can only be reaped if these technologies are combined in an intelligent manner. Since many companies are unsure of what they need to do to identify and successfully combine Industrie 4.0 solutions, VDMA has developed "Guideline Industrie 4.0" to help implement it in SMEs and thereby assist them in mechanical and plant engineering and in developing their own Industrie 4.0 implementation and business models."

On being asked that since Industrie 4.0 is fundamentally a process for manufacturing and supply, how would it address vendor selection and standardization for German OEMs working in India, and how would it help in optimization of the end equipment, Welcker and Nath informed that Industrie 4.0 would incorporate the required quality manufacturing standards for vendors and thereby leverage their association with the OEMs to make products as per the required specification. And since automation will see adaption of sensors in the equipment, there will be optimum utilization of the equipment and their availability.

Speaking at the event, Martin Ney, German Ambassador to India said, "In the last three years, machinery deliveries from Germany to India have increased at an annual average of about 7 percent. This trend continues in 2018 as in the first six months (compared to last year), exports from Germany to India increased by more than 10% to 1.6 billion Euros in total. This makes India the second largest trading partner in Asia, next to China. Indian mechanical engineering exports to Germany has been rising since 2001, to a total of 350 million Euros in the first half of 2018 – an increase of 10% compared to the previous year, showing profitability of trade on both sides."

VDMA, a German mechanical engineering industry association, represents SMEs in Germany and is Europe's largest industrial network with more than 3200 members. VDMA is represented in India through its liaison offices in Bangalore, Delhi, Mumbai, and Kolkata.