The conference on 'Implications of GST on Infrastructure & Construction Sector' organised by the PHD Chamber of Commerce & Industry in New Delhi, was an exercise in intellectual stimulation as industry experts sought to unravel the components and complexities within the proposed new tax and its impact on businesses 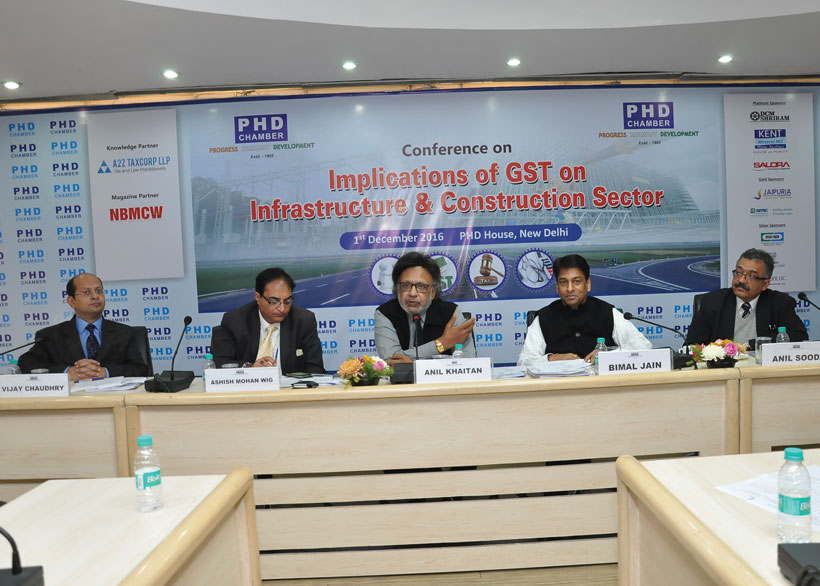 Roads, Ports & Other Infrastructure Committee and the Indirect Taxes Committee of PHD Chamber of Commerce & Industry organised a conference on 'Implications of GST on Infrastructure & Construction Sector' on 1 December 2016 at PHD House, New Delhi. More than 60 delegates and 14 speakers from the Construction Industry and other stakeholders attended the full-day event.

The objective of the conference was to analyse the provisions of the model GST law and assess its impact on the infrastructure & construction sector. The conference provided an opportunity to get insights from a distinguished panel of leading GST experts, tax advisors and practitioners. Delegates included senior officials from the central and state governments, industrialists, policy makers, thought leaders, and financial institutions, among others.

Mr. Ashish Mohan Wig, Chairman, Roads, Ports & Other Infrastructure Committee, PHD Chamber, in his welcome address said that the new tax regime will have an impact on all the sectors including infrastructure. Currently, infrastructure projects enjoy various concessions and benefits from indirect tax perspective, and it is imperative to evaluate whether these benefits would continue under the GST regime.

He said that in order to clear the uncertainties regarding GST, it would be necessary to organise a series of such sessions in different states as they are not in sync. "We will go to them, compile their suggestions and take it to the government for implementation. Infrastructure is the most important sector and every vertical within it gets impacted differently by GST. We want to deliberate on different aspects, get feedback from all, and assimilate the information and expert views from all concerned."

Mr. Bimal Jain, Chairman, Indirect Taxes Committee, PHD Chamber, in his theme presentation, highlighted that the Chamber has been interacting with various functionaries of the Finance Ministry on the issue of GST, and has emphasized the need that post GST, the key segment of infrastructure sectors should continue to enjoy the existing tax exemptions including input credit to retain the vibrancy of the sector for its further growth and multiplications. He also said that the Chamber has advised the government to bring in the model of GST law, devoid of and free from tax cascading effect to improve ease of doing business. The government is committed to enabling ease of doing business for larger economic engagements from both overseas and domestic investors.

Mr. Anil Khaitan, Sr. Vice President, PHD Chamber, in his special address mentioned that the trust deficit that has grown up between the government and industry should be narrowed down for the growth of the country and the coming generations. Referring to the housing for all by 2022 scheme, he raised doubts as to how would this address GST as the scheme is for the poor people.

Mr. Anil Sood, Founder, CAS Associates, said that the GST code should be such that it can not lead to double taxation, and also facilitate placement of healthy business practices for comfort of both the government and industry. According to him, 90% contracts end up in arbitration because of tax liabilities. There are various issues such as multi-state contracts (supply of materials/services), offshore supply (only custom duty is being paid now), petroleum is outside GST so how will this impact the aviation industry? Will cost of air travel go up? All these issues need serious deliberations and will have to be taken up with the government.

Speakers gave an overview of the GST, update on change in Model GST law draft, provisions of GST and the implications thereon and an analysis. During the two technical sessions, they shared their views on topics such as GST applicability on works, contract and construction; applicability on ports and infrastructure; exemptions under present tax regime and proposed GST; transition provisions; impact on procurement of goods and services (domestic and offshore); concept of supply and valuation under GST; vendor negotiation; tax planning opportunities under GST, and so on.

Delegates and speakers raised relevant, practical issues and concerns regarding sustaining businesses post GST, which they feared would raise tax rates from the current 15% to 18%, which would impact consumer spend. The idea behind GST was to do away with multiple taxes, and the maximum impact and of administration was being felt by the Construction and Real Estate industries. While earlier, only the positives of GST were announced, but now it appears that from a single taxation there could be more components within it, besides which, there was no clarity on the multiple slab rates, classifications, etc, all of which could increase litigation.

It was felt that taxation was set to become higher than in the present taxation scenario. Rules were yet to be framed, assessees were still not prepared, systems would have to be adjusted accordingly, need for analysis on various projects, advance planning for critical precautions, and transitional issues with ongoing projects. Concerns were raised on procurement of goods & services, supply and valuation, project cash flows, impact on suppliers & EPC contractors, flow of credits, implications on inter-state works contract, cost of compliance, and element of tax on tax.

There were too many riders, as there were the pros and cons. So why was the industry going through this exercise as the complex issues were not enabling 'ease of doing business' as being propounded by the government? The question raised but left unanswered was "Is GST the desired tax reform?" Mr. Vijay Chaudhry, Director, PHD Chamber, delivering the formal vote of thanks, called upon the delegates present to give their inputs, feedback and suggestions, which the GST Council would take up with the government.