Heralding new revolution in ever expanding Indian infrastructure sector,Tekla India user meet drew an overwhelming response from over 100 companies and a large number of software users. The three days meet held in Mumbai, was aimed at making the users aware of new features and upcoming software version of Tekla India.

Addressing the participants, Director, Tekla India, Mr. Ajit Mohite, informed that the dynamics of infrastructure building now are fast changing and to meet the emerging challenges in infrastructure development. Tekla India has recently released its main annual version of Tekla Structures BIM software. The latest version Structures 14 includes, innumerable improvements making it more user–and environment–friendly software. Tekla Structures 14 is already in productive use with many Tekla clients in India and abroad. Presenting an overview of the business in Indian and global context, he dewelled on Tekla’s efforts to promote usage of Tekla structures in India’s burgeoning infrastructure segment, which is according to him, a win win opportunity for both Tekla and its users.

Through the 3-day meet Tekla Software technical sales and product support staff remained available to assist users with system areas of personal interest and to response to their queries on the spot. Tekla’s Area Sales Managers, Mr. Nirmalya Chaterjee and Mr. Chandrashekar, explained Tekla’s BIM-Building Information Modeling and how it is going to change its users ability to expand its business into structural designs, Precast and Concrete.

In addition to this, Tekla support staff and guides ensured that the participants have all possible contact with users to provide them every information about the three days meets sponsored by Dell, and projected the company that its products are part and parcels of Tekla's customers business. Tekla also ensured that its users utilise the opportunity and gain useful technical knowledge from Tekla’s keynote speakers.

Tekla Structures 14 includes improved tools for managing and sharing a BIM, building Information Model between software users and construction project participations. The software now enables working on models twice as big as before without the risk of running out of memory. It contains new features and benefits like task oriented user interface, more flexible licening system, multi–user tools and ability to work with bigger models which can be used by all concerned.

For Structural Engineering benefits like cast in place modelling reference model management, wider collaboration, e.g., A&D integration are attached with this latest version. This also includes specific features like easier modelling of assemblies, modelling tools for offshore and PEB, easier modelling for reinforcement, more efficient drawing production, integration to fabrication and manufacturing tools for hollow core which can be used for steel and fabrications as well as pre–cast concrete detailing and manufacturing.

In the concluding session, the winners of the users meeting model competition were announced. They were Cistron Infotek Pvt Ltd Central Heating, Plant for the University of Massachusetts, Sieghart Engineers & Steel Detailers Pvt Ltd, Dubai Metro Station Eversendai consulting engineers Pvt. Ltd, Dubai Mail Starroof. The price for Model Competition was Dell Laptops. There was also lucky draw for participation and the price for this was Sony Disital Camera. 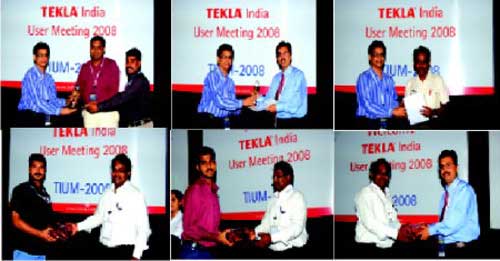