Buoyed by the large number of infrastructure projects in North Eastern India, Sany Heavy Industries India is making a foray into the region, covering seven states. Mr. Sanjay Saxena, VP - Marketing, Sany India, in an interaction with P.P. Basistha during the company’s road show in Guwahati, shares their business strategy and prospects.

Sany Heavy Industries India is bullish on the business opportunities offered by the increased pace of infrastructure development in North Eastern India, involving roads, bridges, railway projects and onshore oil and gas projects. Many of the projects are high scale, and therefore, very challenging and requiring critical construction methodologies. 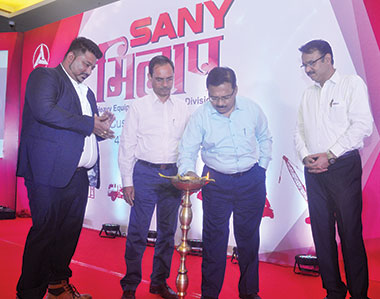 Says Mr. Saxena, “The character of the projects is highly diverse in nature, and therefore, challenging too. But we are well equipped to address the construction requirements of these projects given our wide range of products that can meet diverse needs, their technical strength and advanced features for high levels of productivity, and our servicing capability supported by our newly appointed dedicated dealer in Assam and our service engineers located across the state.”

He informs that for the road projects, the company has sold its state-of-the-art SR 205 and SR 115 piling rigs, and has successfully promoted its SPC 250-300-ton mobile cranes for the onshore projects of ONGC. With close to 30 cranes already present, the company foresees fresh demand for another 50 cranes from the onshore oil industry of Assam.

The company has sold 100 STCs (Sany Truck Cranes) of 25-30-40 tons. These STCs, that were assembled at its Pune plant, are mounted on the chassis of Ashok Leyland, AMW and Bharat Benz as per customer’s requirements in 2016.

“A fair number of these cranes have been sold to niche application areas of ONGC for onshore oil rig installation and maintenance. In fact, ONGC has been placing repeat orders for STC 450. These cranes can be applied in various jobs, so we are confident that they will find many takers in the North-East as well,” says Mr. Saxena. Sany STCs range between 25-30-40-45-50-60-75-80-100 tons, while the 50-100-ton cranes are imported from its China facility.

The company is geared up with its motor graders and piling rigs to meet the demand from upcoming road projects, especially those connecting the states. Demand is expected to come from small size concrete batch mix plants and transit mixers. Erection of precast concrete girder sections is likely to raise demand for trucks and mobile cranes as well.

Sany India’s piling rigs have been acquired by Assam-based railway contractor Bhupen Das & Co. A senior company official said, “We have recently procured a SR 200 piling rig for a river bridge project. It will undertake piling at 1200 mm dia at a depth of 50-60 meters for a total of 191 piles. The equipment is at par with European standards, besides which, Sany is very price competitive, and they have a reliable service and support for their equipment. These are the reasons behind our decision to acquire the product.”

Another contractor, Das & Co, has acquired a SR 205 and a SR 105 piling rig for use in a bio-park being constructed in the state. The contractor has also acquired Sany’s 80 and 24-ton excavators, which, apart from general excavation jobs, are working with hydraulic rock breakers.

Sany India has gained a strong foothold in the Indian market, which Mr. Saxena attributes to the company’s diverse product range, state-of-the-art manufacturing facility that includes a global training and skill development centre, and its efficient after-sales support. “We have 55 service engineers based in strategic locations across the country, 4 product support experts, and centralized warehouses in Delhi, Kolkata, Guwahati, and Jammnagar. The company has invested around Rs.40 crore in strengthening its capabilities as we want to ensure high availability of our products and timely service,” he says.

Sany India currently has a fleet of 100 piling rigs, 4000 excavators, 400 transit mixers, and sizeable mobile and crawler units in India. Going forward, the company plans to invest further during the next five years in its India operations to strengthen its production capabilities and after-sales service.