Committed investment of Rs.80 billion for the group and Rs.18 billion for Volvo-Eicher joint venture planned in near future. 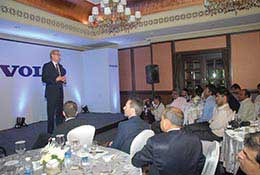 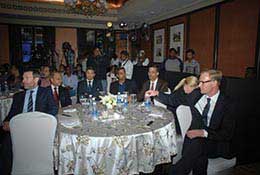 Mentioning about the company’s future growth plan Mr. Persson says, “we have committed an investment of Rs.20 billion during the span of next five years for the entire group. While an allocation has been made for Rs.18 billion towards VECV joint venture. The former investment will be carried out to strengthen our business in construction and mining, trucks and buses whereas the later would be to strengthen our jv partnership with Eicher.” Providing details on the investment for strengthening the jv partnership with Eicher, Mr. Persson informed, “under the investment plan, we will set up a greenfield engine manufacturing at Pithampur near Eicher’s plant along with setting up a new bus body plant, paint shop and paint facility. The investment will strengthen product positioning of the entire range of Eicher’s hauler and tipper trucks.”

He added, “backed by the investment in the Eicher jv, we will look forward to expand our presence in light and medium capacity tipper trucks. Eicher’s market network in the country will be utilized to promote the same.”

Mr. Persson informed that, the new investments, which would enhance production capacity would enable the Volvo to make its presence in a bigger way in global markets involving Asia South East Asia and other potential markets, investment for production expansion through its own financial reserves.