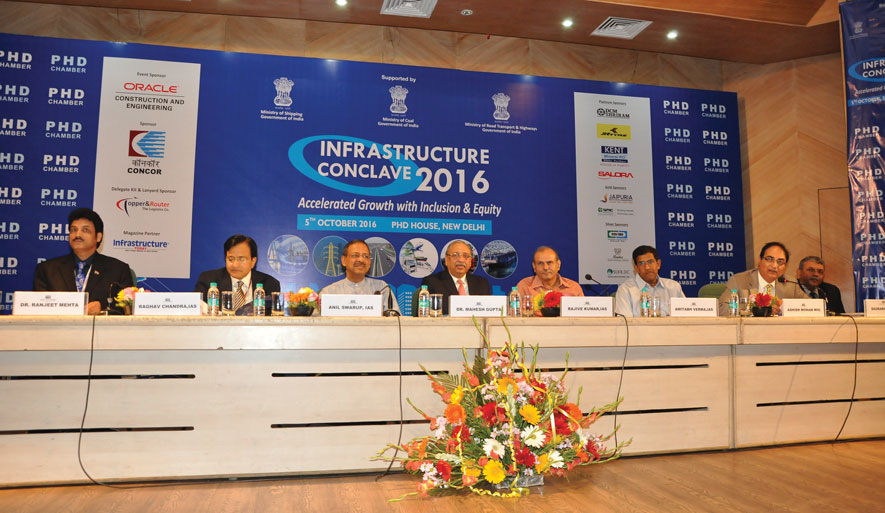 Roads, Ports & Other Infrastructure Committee and Hydrocarbons Committee of PHD Chamber of Commerce & Industry organized an "Infrastructure Conclave 2016 – Accelerated Growth with Inclusion & Equity" recently at PHD House, New Delhi. It was attended by more than 130 delegates and 27 speakers from the Industry, government, and other stakeholders.

Dr. Mahesh Gupta, President, PHD Chamber, in his welcome address, emphasized on timely government interference to sort out the problems of contractors that are engaged in putting up the required infrastructure on roads, railways, and other modes of transportation. Chairman, National Highways Authority of India (NHAI), Raghav Chandra while addressing the event, said that to boost connectivity in the road and highway sector, the government is sparing no efforts to ensure greater efficiency and bring healthy competitiveness at all levels the focus is not just on broadening the existing road infra, but also to build green field and green corridors across highways in the country.

He said that NHAI would award 7,000 km of road projects across regions in the country during the current financial year. In addition, NHAI will also implement a pilot project to manage daily traffic jams on the Delhi-Gurgaon Expressway using latest digital technologies such as Intelligent Traffic Management System (ITMS) and surveillance cameras. The pilot project, which is aimed at decongesting traffic flow on the Delhi-Gurgaon highway, will soon be initiated and later it will be implemented in other parts of the country.

In an informal conversation with NBM&CW, NHAI chairman corroborates media reports about the noticeable spurt in activities in the country's road sector and admitted that there is a 35% increase in the demand for deployment of construction equipment. Bitumen consumption has also gone up by 35%, but cement and steel segments remained slow, recording 5 percent increase only, he said.

Amitabh Verma, Chairman, the Inland Waterways Authority of India (IWAI), revealed that the nodal agency has floated tenders for ferry vessels, dredging and setting-up of terminals on Yamuna in the National Capital. Ferry Vessel operations in the 16 km length of river Yamuna from Delhi could be a reality from December this year. In this connection, IWAI has also sought permission from the National Green Tribunal for the works on the river. It is looking at Yamuna very closely and has surveyed the targeted stretch of the river and come out with three tenders on Yamuna – one each for ferry vessels, dredging, and for operating and construction of terminal. He announced that tenders for developing 7 waterways will be floated in the next 3-4 months as Parliament has given a nod to convert 106 rivers into National Waterways in addition to the existing six, and a new policy on dredging is on the anvil. 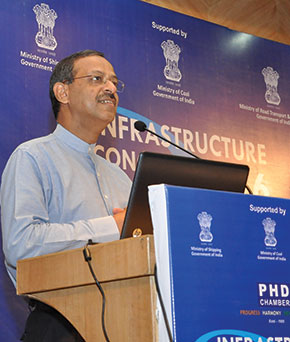 Delivering his speech, Secretary, Ministry of Coal, Anil Swaroop revealed that the aggressive policy initiatives of the central government proved a game changer in the coal sector. As the segment, which was reeling under severe shortage of coal, turned out to be coal surplus and (as on March 31, 2016), it has a whopping coal inventory worth 56 million tons. This became possible largely due to effective mines surveillance system (MSS) and global positioning system (GPS) that enabled mining plan under which the ministry keeps tag on the movement of coal during evacuation, and enabled the ministry to effectively check large scale illegal mining, pilferage, and seepage of coal.

Addressing the audience, Chairman-Road, Port & Other Infrastructure Committee, PHD Chamber, Ashish Mohan Wig, stressed the need for pushing the pace of privatization of various verticals of infrastructure. It is a matter of concern that power transmission sector is still lagging way behind on this score apart from metropolitan cities, Odisha is the only state in the country which is going ahead with power transmission privatization. Privatization will not only check large scale pilferage and seepage of resources but also improve the financial health of these verticals, besides boosting employment.

Mr. Wig, highlighted the recent government initiatives in the infrastructure sector including ports and inland waterways. He emphasized that inland waterways are the need of the hour as a supplement mode of transport offering tremendous scope for the industry to participate in this fast emerging sector. To efficiently handle the increasing trade requirements, he said that there is immediate need for strengthening the port infrastructure of the country.