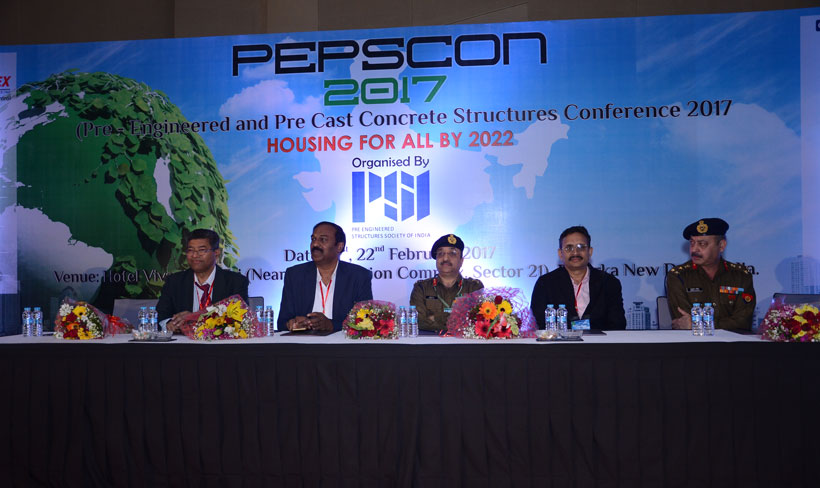 The last few years have witnessed growing interest in prefab and precast construction techniques, wherein buildings use concrete or steel structural components that are standardized and factory manufactured, and then transported to the site for assembly. Since the components are mass produced in a factory, a large number of buildings can be built in a short time and at a lower cost as compared to the conventional method of construction. 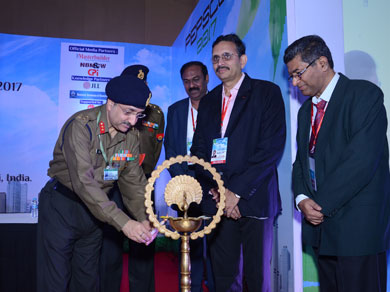 Chief guest Major General Sanjeev Jain, Director General, Directorate General of Married Accommodation Project (DGMAP), Military Engineering Service (MES), informed that the Defense ministry is going to push the usage of new construction technologies in a big way. “The Ministry has allocated Rs. 24,000 crore for housing projects for three services: personnel and other military infrastructures; 80% of this would be spent in making houses using pre-cast and pre-engineered solutions. Under the married accommodation project (MAP), 80,000 units will be constructed at 150 military stations across the country.”

Factory- or assembly-line-produced buildings are made to stricter norms and use cutting edge technology. With such factory produced components, one can design an entire building by using architecture software. Production of the various segments in a factory is mechanized/robotized, with strict quality checks and strict adherence to assembling codes. This reduces the number of manufacturing defects, which ensures better performance of the built structure.

This method of construction reduces project completion timeline by 40 to 50%, which in turn, reduces overheads on men and machinery. A ready building can be leased out early and the revenue accruals on early leasing will lead to savings as compared to conventional construction that will take a longer completion and usage time. Even though prefab and precast materials are 15-20% more expensive, higher efficiency, less wastage of material, and savings on time and labour bring down the overall cost of the construction significantly, especially of large buildings.

S. Robin, Assistant Vice President, Strategic Consulting, JLL, informed that as per research undertaken by JLL, bulk of the housing shortage is arising from the EWS and LIG category of households. Cost of construction across major cities has been consistently on the rise, which is a deterrent to affordable housing. Land price currently forms 30-50% of the cost of project within city limits. However, RBI regulations do not allow banks to fund land purchase.

Developers are therefore left with few options: either forming a joint venture with the land owners or getting funded through NBFs, which is often expensive. A majority of developers use conventional construction methods which are time consuming and the projects often face time and cost over runs. Increase in the time period increases the cost of financing. “Prefab is the key to timely construction of affordable housing. For the prefab industry, the cumulative gap of 35 million units is the potential demand that exists up to 2022,” he said.

Present at the event were pre-cast and prefab manufactures, construction companies, design engineers, structural engineers, material and component suppliers, entrepreneurs and developers, government officials, implementing agencies, policy makers, consultants, architects, and technology providers. It was suggested that the Government should give tax incentives, and enable single window clearance for approvals, and also allow for an exit policy for the developer which he can do by upgrading the project (or unsold units) of EWS/LIG projects.

According to C. Shekhar Reddy, Past National President, CREDAI, though the Centre has taken a slew of measures to reform the sector with interest subsidy, income tax exemption, grants, amendments and other incentives to the housing sector, however, the state governments need to align their policies with the Centre’s. “New construction technologies such as pre engineered structures reduce material usage by 32 to 40%, manpower by 50%, and make units sustainable. Hence, to promote PPP model in the sector, tax exemptions and incentives would go a long way to strengthen both demand and supply side,” he said.

P. Surya Prakash, President, PSI, averred that ambitious housing projects such as the Prime Minister Awas Yojna (PMAY) will give a big boost if the Centre and State governments can provide tax relief to pre-fabricated technologies. Prefab structures would increase house building capacity of implementing agencies of the government like DDA, NBCC, MES and private sector developers, five-fold, and would bring in both quality and affordability. Currently, 300 units are being built in the country per day and with the use of prefab/precast construction it is possible to make 1500 units per day. GST would give a further boost to the sector as it would bring down current indirect taxes such VAT, Excise and service from 25% to 18%.

“Many precast units being set up demand increasing HFA policy by the government to boost the industry. International companies are supplying the machinery, plants, equipment and technical know-how, but this is only 20% compared to the conventional ways of construction,” said C. A. Prasad, Director, METEY Engineering & Consultancy Pvt Ltd.

However, every new technology has its own set of problems and challenges: a higher grade technology has to be adopted, mass adoption has to be encouraged, the new construction methods have to be made economically viable, and there is high initial investment involved as the cost of construction is higher by almost 40%. Other challenges include planning, challenge of implementation, cost of investment, ROI, viability of the prefab and precast industries, creating awareness in the public, issue of taxation, etc. State governments and real estate institutions must encourage the industry to imbibe the new techniques and start implementing them into their projects and help clients reap the benefits of using them.