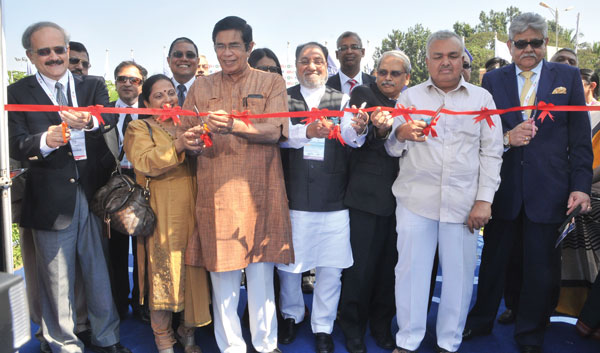 Long-awaited South Asia's biggest exhibition of Construction Equipment EXCON 2013, organized by the Confederation of Indian Industry (CII) at the Bangalore International Exhibition Centre, Bangalore in November, concluded at a promising note, as it generated overwhelming response from the industry which as a result restores everyone's confidence in the Indian economy.

Notably, the seventh edition of the premier event witnessed the participation of over 730 exhibitors, 35,000+ business visitors, 100+ launches and generated unexpected business opportunities for the participants. The show highlighted the potential of the construction equipment industry and showcased the opportunities of the entire infrastructure sector of the country.

Inaugurated by the Hon'ble Minister of Road Transport and Highways, Mr Oscar Fernandes, Excon 2013 witnessed the participation of 20 countries from across the globe. Though the Indian economy is recovering slowly, the foreign CE companies seem to be bullish on their future in the country and this optimism was reflected in the quantum jump in the number of foreign participants at the show, where out of the total participants, the international participants constituted over 29%. The increasing participation of international companies demonstrates the fact that India has tremendous scope for being a manufacturing hub for construction and equipment industry.

Speaking at the inaugural session, the minister said that though Excon has been organized at a time when there is a downturn in the world and India's economy, it is heartening to see that CII has been successful in bringing in people from all over the world in such great numbers to showcase India's own achievements in developing such equipments for infrastructure growth. "I congratulate for this great achievement. I am also happy that large number of companies from abroad have partnered in this exhibition," he said.

Welcoming the audience, Mr Vipin Sondhi, Chairman, EXCON 2013 said, "The scope and reach of EXCON has been growing over the years and today we see the greatest number of industry and visitor participation, making EXCON 2013 the biggest ever exhibition of CE not just in India but also in South Asia."

Mr S Gopalakrishnan, President CII, stated that Excon this year has attained new heights with 17% growth in number of participants. He pointed out that the pace of growth in infrastructure in India has not kept pace with demands and it is a major challenge for the country. Highways, modern bridges, world-class airports, reliable power, and clean water are desperately in short supply.

He highlighted that infrastructure development is a critical enabler for economic growth as the lack of it impedes India's GDP growth rate by 1-2 per cent per annum. Mr. Gopalakrishnan viewed that the Industrial Corridors will play key role in overall development of the nation by removing bottlenecks for freight movement between the industrial regions and major ports of the country. CII has been engaging with the centre & state and other stakeholders to work towards making Public Private Partnerships (PPPs) as one of the important means to increase investments in Indian infrastructure. 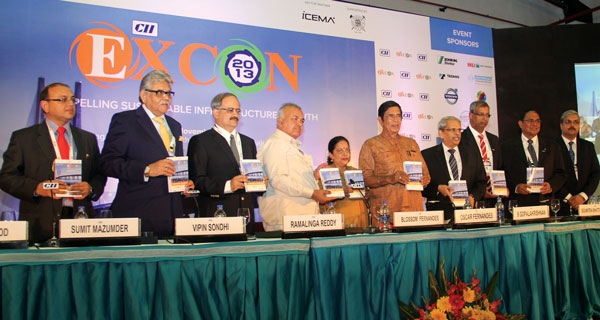 Talking about the theme of Excon 2013, Mr. Sondhi explained that with the theme on 'Propelling Sustainable Infrastructure Growth', the premier event is not just South Asia's largest but is on its way to become one of the top few in the world for propelling infra structure growth in India. He was of the view that there are number of benefits that will accrue from the development of construction equipment industry. The benefits include "increase in per capita income in India, creation of 30 to 35 million jobs in infrastructure and other sectors linked with infrastructure development like steel cement etc, a massive 5 to 6 per cent reduction in unemployment rates and three to four per cent of the population will getting lifted above the poverty line, he pointed out.

Mr. Sondhi briefed that the Excon 2013 is focusing on sustainable growth and revolves around six themes: accelerate road building capacity for improved national connectivity, rural connectivity for inclusive growth, improve of quality of life in our cities through urban renewals by using equipments which are compact and small, building infrastructure in an ecologically sustainable manner specially on emission and safety, facilitate finance and liquidity for infrastructure projects across the value chain and develop India as a outsourcing hub for aggregate and component manufacturing.

Mr. Amit Gossain, President ICEMA, said that though the construction equipment industry is witnessing sluggish growth in recent times, the Cabinet Committee on Investment, set up by the government, has made some progress in getting stalled projects worth lakhs of crores moving again.

At the conference, ICEMA in association with A.T. Kearney released a report on Roadmap for Realizing ECE Industry's Long Term Potential. According to the report the ECE (earthmoving and construction equipment) market is expected to grow by a healthy 20 to 25% over the next few years to reach 330,000 to 450,000 units sold in 2020 from the current levels of 76,000 units. "This would imply a $16 to $21 billion market by 2020, up from $3 billion at the current level," the report said. It pointed out that the main drivers for growth of ECE industry are: growth in end-user industries, higher adoption of traditional applications to speed up projects, development of new applications, growing urbanization and better availability of finance.

Excon which highlighted the potential of the construction equipment industry and opportunities of the entire infrastructure sector of the country is supported by The Ministry of Heavy Industries and Public Enterprises and the Ministry of Road Transport & Highways, Government of India. Government of Karnataka is the Partner State for EXCON 2013 whereas the Indian Construction Equipment Manufacturers' Association (ICEMA) is the Sector Partner.

Being the sole official Publication NBM&CW's Editorial Team was available at Excon 2013 to cover the show. A detailed post event report featuring the new launches made or JV signed and also the interactions done with over 100 Captains of the industry will be published in NBM&CW's January 2014 edition.

In this post Excon 2013 review report, we present detailed interactions which our editorial team had with the participating companies, numbering nearly 100 construction equipment companies, domestic as well as overseas. Despite present slowdown spell being witnessed by them, the mood of the companies was positive maintaining that the impact of the slowdown has not hampered their business much as it was expected. 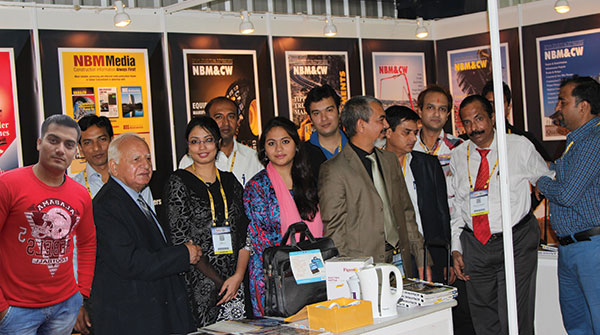 As a matter of fact, they felt, it has been a propitious time for them to take stock of their organizational structures, product portfolio, putting forth plans to launch new products and services, venturing into new areas and geared up for the better as the economic cycle turns for the better. There are many ways to harness the situation to one's advantage. The companies asserted that they are hoping for the tide to turn with new government in place, where there would be lesser policy logjams. Following this optimism, the companies were seen actively supplementing their efforts on expansion, initiating new marketing strategies and networking including plans to strengthen their brands. The common theme of NBM&CW interaction was a strong and loud message that the economy is inching towards its growth path and consequently the CE sector in India is expected to bounce back. Some of the interactions are being reported in brief in this edition reflecting positive sentiments.