Today, the use of sprayed concrete in mines, tunnels and other civil engineering structures is an important and integral part of successful, highly productive, and safe rock support systems. Normet's TamShot AF range of high-performance alkali-free accelerators for sprayed concrete applications, have been formulated for improved fast-setting and safer performance over standard sulphate-based accelerators. The new generation set accelerators, both stable suspensions and clear solutions, make site-handling logistics and longer-term stability more favorable.

Normet's TamCem range of super-plasticiser technologies have been formulated to give exceptionally high water reduction based on customised blends of specific polycarboxylate copolymer technologies. These super-plasticisers will usually provide an open time of 3 to 6 hours. Added open time often requires the use of TamCem HCA – a hydration control admixture, without which technology, use of modern-day sprayed concrete would be very challenging. 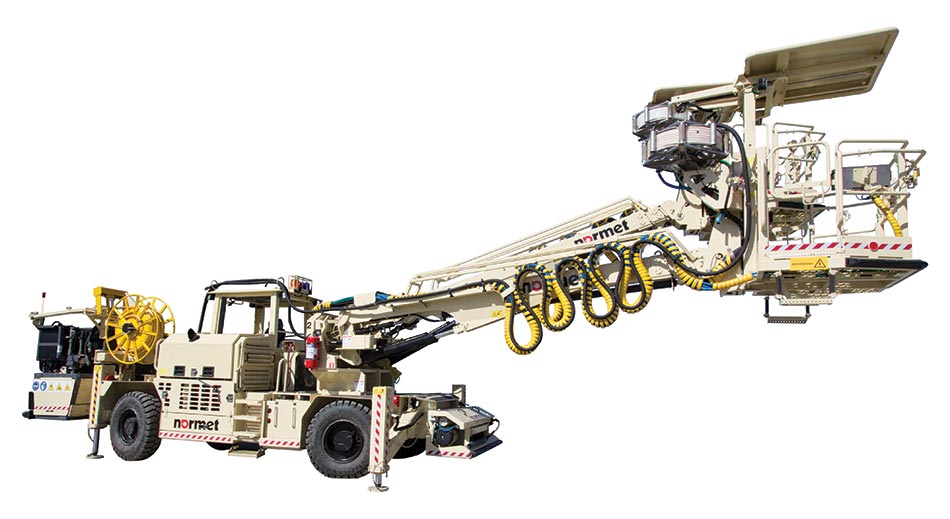 Normet's new TamCem HCA is a very effective concrete hydration control admixture added at the batching plant. By adjusting the amount added, the "open-time" of fresh concrete can be extended dramatically anywhere from 4 hours to 2 days. Normet's water control resins are used throughout the full cycle of construction. From underground excavations such as shafts, tunnelling and basements through to above ground injection on bridges, roof structures to viaducts. Normet's range of polyurethane silicate resins are new generation systems used predominantly in the mining and tunnelling sector. Its TamPur 116T is a two component 1:1 ratio resin that reacts to form a non-expansive, solid compound that gains considerable adhesive, compressive and tensile strength within minutes.

RBG (Rock Bolting Grout) is suited for securing all types of rock bolts where early tensioning/loading is required along with full rock bolt encapsulation. TamPur RBG is available in varying grades to suit both an automated or manual injection process and to allow for local ambient and rock formation temperatures. It incorporates a gelling agent that produces a non-sag resin once the two components are mixed and injected. TamPur 117 is designed for cavity filling in hard rock mining, goff filling in coal workings, to general void filling for tunnelling and civil engineering projects. It reacts within seconds to form a high, expansive, lightweight foam, which is economical, non-toxic, fire resistant and user friendly.

Normet D-Bolt® is widely used as part of the ground support system in some of the largest and deepest mines and tunnels around the World. The D-Bolt® represents the new generation of energy-absorbing rock bolting systems, specifically designed for efficient and reliable rock reinforcement, in both squeezing and burst-prone strata conditions