Gadkari:"We have an ambitious target of developing 1,25,000 kms of National Highways in next 5 years with planned investments of Rs.5 lakh crores."

Mr. Nitin Gadkari, Union Minister of Road Transport & Highways (MoRTH) believes that for constructing quality roads & bridges and for achieving an ambitious target of developing 1,25,000 kms NH per year in the near future, there is an urgent need for adoption of newer construction technologies and maintenance practice.

Delivering the inaugural address at the two day national conference on highway equipment, which took place recently in New Delhi, Mr. Gadkari said, "State Highways will be converted into National Highways. The government will embark on the project step by step. Since cost of construction and maintenance of roads has been going up, government will be emphasizing towards creation of more concrete roads with bitumen sprayed on the surface."

Emphasizing on using quality construction equipment, the Minister said,"There is sufficient room for quality improvement in roads and bridge projects as it is usually found that expansion joints are not perfect. Further, there are numerous areas in road construction projects in India where quality improvements can be carried out both by the concerted efforts of equipment manufacturers and contractors, and by using technically advanced plant and machineries in projects."

He apprised,"To mitigate financial risks of small and medium contractors, and enhance participation of Indian contractors in projects, the government will go for smaller packages between Rs.20-50 crores. We have been implementing such initiatives in states of Chhattisgarh and North East. There has been a delay in getting the approvals, usually involving differences between various ministries. However, we are committed to sort out the difference."

Speakers at the two day national conference on highway equipment, which took place recently in New Delhi, highlighted the importance of induction of further advanced mechanization in road construction sector, for the government to attain the target of its colossal, planned road network development programme. Organized by iCEMA, the conference was attended by senior representatives from the Indian construction equipment industry, senior Ministry of Road Transport & Highways (MoRTH) public works department, Border Roads Organization and so on. It discussed about newer technological advancements in road construction equipment, beneficial for timely and quality project completion. 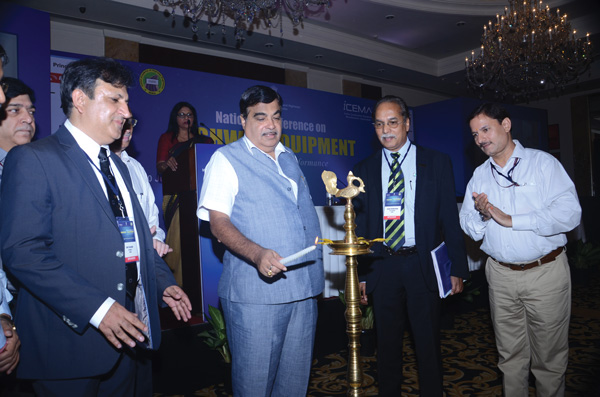 Delivering the keynote address at the event, the outgoing president of iCEMA, Mr. Amit Gossain said, "The colossal investments planned by MoRTH for developing the Indian road network amounting to Rs.37,000 crores to National Highways Authority of India and Rs.14,000 crores to Pradhan Mantri Gram Sadak Yojana will resultant towards induction of further advanced technologies in Indian road construction sector. The strong initiative to develop the road construction sector is related directly to the manifestation of the Indian Governments' 'Make and Made in India campaign'. This will resultant towards boosting up the prospects of the road construction equipment sector in India, enabling the OEMs in India to invest more in manufacturing of the equipment and R&D for serving the domestic and also the export markets."

Mr. R. K. Pandey, Chief Engineer, MoRTH informed, "India has got total 49 lakh kilometers of road network with National and State Highways where only two percent of the network is National Highways. The government has undertaken initiative to increase the capacity of the National Highway Network through National Highway Development Programme through seven phases. This will involve replacement of railway level crossings, replacement of weak bridges, tunneling construction of express ways and other projects. The preparations of DPRs for the projects are under progress."

Mr. Kaushik Basu, Chief Engineer, MoRTH said, "Given the large scale road infrastructure development initiative taken by the government, there will be large scope for promoting specialized equipment. However, to optimize construction work and lessen cost of projects, the equipment will have to be multipurpose in their origin. The machinery should be having options of attachments fitment."

Speaking on operator's skill and safety, Mr. Anand Sundaresan, (Newly elected President, iCEMA and Vice Chairman & Managing Director, Schwing Stetter India) said, "Newer generation of construction equipment across verticals are equipped with enhanced quantum of electronics. This will require trained operators, so as to have optimum performance of the equipment. IESC has taken initiatives for training and certifying operators."

Mr. Glenville Da Silva (designation) said, "Given the projected requirements of 3,00,000 equipment in India by 2024, it is estimated that there will be requirements of two million trained people. Taking cognizance, iCEMA under National Skill Development Council has begun training of operators for various construction and mining equipment."

Speaking on intelligent equipment systems, Mr. R. Arunachalam, Product Health Manager, Asia Pacific, Caterpillar Paving Products said, "The advantages of telematics are numerous. The hardware located in the machines, helps to reduce costs through preventive maintenance by monitoring the performance of the machines. IT enabled equipment leads to reduction of wastage in operations; improve job managements at sites, resultantly adding up to profit margins of contractors."

Speaking on lifecycle cost analysis at the event, Mr. K.C. Sharma, Superintending Engineer, MoRTH said, "Prior to purchasing equipment, contractor should not only take into consideration capital costs but lifecycle costs as well over the lifetime of the equipment. Lifecycle costs analysis will enable contractors to compare similar products for better production and quality." Mr. M.P, Venkatachalam, President, Con. Equip. Services, highlighted various elements of life cycle costs of batching plants involving running and operating costs including maintenance and consumables."