McCoy Soudal which is a 50:50 joint venture company between the McCoy Group of India and Soudal Group of Belgium, has recently organised a press conference in New Delhi to announce the commissioning of its new production plant, located at HSIIDC area in Bawal, Haryana and about its state-of-the-art machines & technology. 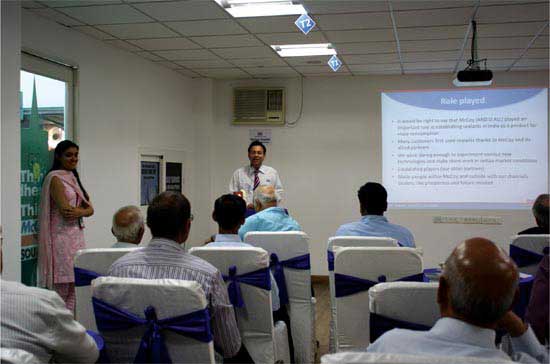 Welcoming the attendees, Mr. Amit Malhotra, Managing Director, McCoy Soudal, said that you all are welcome here to explore the McCoy Soudal world of silicone adhesives and sealants. Whether you need sealants for your day-to-day household works or for the infrastructural developments, we, at McCoy Soudal, fulfil your all types of requirements.

Speaking about McCoy Group he said that the group which was originally started in the early 1980's as a trading platform of full range of silicones, has now diversified into manufacturing, contracting and joint ventures.

Elaborating on company's journey so far, he stated that during the last decade, McCoy Group established business partnership with over 30 companies globally and introduced to India a wide range of products starting from equipment, tools, automotive OEM bus coach adhesives and sealants and host of other specialty and engineered products. Over the last few years, the company realized the importance of its own brand and started thinking towards backward integrating all its products into manufacturing and Joint Venture. In 2010, the group steered forward and entered into a 50: 50 joint venture with Soudal NV, Belgium and formed McCoy Soudal Sealants Adhesives & Foams Pvt. Ltd. the first of its kind JV in the Indian subcontinent with the capabilities of manufacturing the widest range of sealants from silicones, polyurethanes, MS Polymer, acrylics, and mastics to adhesives, specialized polyurethane foams etc.

Giving an overview of Soudal NV group, Mr. Emmanuel De Smedt, Vice President, McCoy Soudal said, that Soudal NV is Europe's leading independent manufacturer of sealants, PU-Foams and adhesives. The company which established in 1966 by its chairman, Mr. Vic Swerts, is now a strong brand all over the world. It serves professionals in construction, retail channels and industrial assembly and has 45 years of experience with endusers in over 100 countries. With 11 manufacturing sites in 4 continents and 35 subsidiaries worldwide, Soudal ensures optimal technical and logistical support.

Throwing lights on the JV between McCoy Silicones Ltd and Soudal NV Belgium which took place in April 2010, he added that the ambition of McCoy group is to have its own identity and the desire of Soudal group to expand their respective positions in the vibrant and growing Indian marketplace, brings the two companies together on one platform. Soudal plans to leverage McCoy's leadership status, established network and marketing expertise in the Indian marketplace and McCoy by integrating Soudal's 44 years of experience in Sealants, Adhesives & Foams, R&D developments & global manufacturing base, believes to offer the largest range of sealants, adhesives & foams in the Indian subcontinent.

The JV McCoy Soudal Sealants Adhesives & Foams Pvt Ltd has recently commissioned its one of Asia's finest and largest sealants & adhesives manufacturing plants in Bawal, on an area of 200,000 sqft. (2 lac sqft.) with an investment of approximately Rs.500 million. Speaking on their newly commissioned production plant, Mr. Malhotra said, "our plant is equipped with state-of-the-art fully automatic machines and equipment from Europe and has been commissioned in a record period of 14 months from the commencement of its land procurement to completion of the building mechanical, electrical, plumbing and fire fighting infrastructure. The world's best equipment has been used to ensure that there is high level of safety built in for our products and people who are working in this plant. This unit has been built with 100% fire safety norms from Europe with a unique fire sprinkler system spread across the plant and office. This plant will be a signature for the Indian sealant and adhesive community," he averred.

Informing about the plant production capacity he reveals, "In the beginning, we will be able to produce 15 million units cartridges, sausages and tubes) of sealants & adhesives which will be further scaled-up to 30 million units in phase II in 2014. The current capacity requirements will be met by the Indian market as well as nearby SAARC countries where in McCoy Soudal has already established a reasonable distribution and sales network."

Expatiating on the products and R&D Mr. Emmanuel said, at present we are manufacturing mostly silicone sealants, which will be expanded to all other sealants (Acrylics, Polyurethanes and MS polymers) and adhesives in the very near future. The market of silicone sealants which was started in the early 90‘s in India has come to a stage of evolution and sealants are now sold across all major trade counters in India. The challenge however is to structure this market by spreading a high level of awareness and education to the customers in the Indian market.

Adding he said, that in our plant, we are also setting-up India's largest R&D and testing center for sealants, adhesives and PU foams. The main reason to have an R&D center is to ensure that we have adapted products to the extreme Indian climatic conditions which are most challenging to produce world-class products. Our products will be continuously upgraded to the increasing & changing needs and requirements of the fast growing industry. In addition to this, plant will cater more specifically to the requirements of special packing needs DIY (do-it-yourself) markets and making sure sealants can be made available to the masses for home and decoration markets.

When asked about the applicators' training programmes to enhance quality and awareness needs in the industry, Mr. Malhotra said, McCoy Soudal initiated McAademy in December 2010 and now conducts weekly 10 programs across India and are also spreading awareness among the architects, interior contractors, plumbers, carpenters glass and sealant applicators, uPVC and fenestration industry professionals, etc. regarding the availability of different products for different applications. Over the last 18 months, we have already trained over 50,000 such endusers and this is a never ending effort for which a huge marketing and training team is established pan India.

In his concluding remarks, he said, now with 11 manufacturing plants, operations spread in more than 35 countries and products availability in more than 120 countries, we are the largest and one of the oldest companies globally in our field which today has 9 regional offices across the country. McCoy Soudal sealants are sold across India in more than 85,000 counters, 3,000 dealers and 5,000 key customers' country wide and to over 22,000 counters SAARC area wise. Now by establishing our plant, various offices and network, we are more than confident to make this industry work towards the right use of products for the right applications.