With the launch of its G75 motor grader, Mahindra has heralded its entry into the road construction business. The launch coincided with an announcement of order bookings of 50 units of the motor grader, thereby making a quick mark in the highly competitive motor grader business dominated by established players.

Mahindra, which had launched its backhoe loaders 3 years back, is now widening its CE portfolio. According to the senior company officials, the new motor grader features wide distinction based on its close application orientation. This is in contrast to the standard motor graders offerings, involving higher initial owning and operating costs, made available by the foreign manufacturers for the Indian road construction sector, usually meant for laying wider national highways and expressways.

Speaking at the launch at Mahindra’s Chakan production facility in Pune, Mr. Rajan Wadhera, President, Automotive Sector, Mahindra & Mahindra Limited and Mr. Vinod Sahay, CEO, Truck and Bus Division& Construction Equipment Division, Mahindra & Mahindra Limited said, “The new Mahindra Roadmaster G75 has been designed and developed in India based on our in-depth understanding of the road contractor fraternity. It will cater to the requirements of contractors involved in projects with various sub-optimal methods of construction with limited mechanization.” 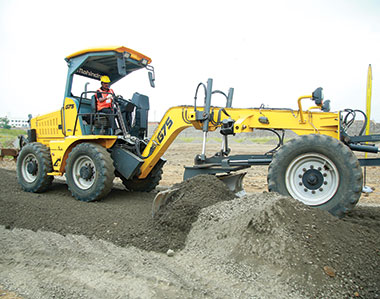 “The G75, which we claim as a disruptive product offering, as compared to conventional available solutions, will be able to deliver affordability in conjunction with rapid improvements in productivity for contractors, involved in construction of small and medium roads and widening of national highways. It will also be suitable for embankment or earthwork for laying railway tracks and leveling of large plots for industrial construction,” they added. According to them, laying of medium and small roads primarily for rural road construction projects will find increased usage by contractors based on clauses in tender documents for utilization of motor graders in government flagship road projects such as PMGSY, Smart Cities, district roads, border roads, and road expansions.

Said Mr. Sanjay Nijhawan, Vice President and Business Head, Mahindra Construction Equipment, “The thrust of the government in developing India’s road infrastructure at a rapid pace is the reason why we chose to enter the sector. Foreign technologies are very cost-intensive and do not enable optimum utilization. With our motor grader, we will leverage the Mahindra brand as a solution provider for road construction, supplemented by our backhoe loaders and other relevant offerings.”

As regards the competitive features of G75 grader, Mr. Nijhawan said, “The G75, powered by 79 hp Ditec, Mahindra engine is at least 65% more affordable than other foreign brands as it delivers about 55% productivity. G75 has undergone over 10,000 hours internal tests and 6000 work hours with end-users such as PMGSY road contractors, in the harshest of terrains and for the toughest of applications such as very narrow roads at high gradients. Following the tests, the product has been validated on all performance parameters including safety and reliability. Since it comes at a more affordable price, sub-contractors and rental agencies can expect decent profit margins. Another notable feature is the optimization of the grader to deliver zero compromise grading at 33%cost compared to conventional motor graders.”

G75 comes with a 10-feet wide blade with the base length of the moldboard is 3000-mm with 16-mm thickness. It has a superior design, enhanced operator comfort and DigiSENSE telematics.

Responding to a query from NBM&CW, on how the company is counting on the higher productivity element. This is when other manufacturers are offering graders with higher engine horsepower, claiming to deliver commensurate levels of higher productivity, leading to higher utilization of the machines and would the graders be offered as packaged business offerings to the road contractors, supported by Mahindra’s backhoe loaders, tipper trucks and concrete transit mixers? Mr. Sahay and Mr. Wadhera said, “We have positioned the G75 with an engine indexed to niche applications. However, making the product more attuned further to project applications, we will upgrade the engine technology by harnessing our synergies based on our competitive engine manufacturing capabilities across our product verticals involving the tipper trucks, backhoe loaders and tractors. Certainly with the multiple products offerings coupled now with the grader we will look to meet the unstated needs of the road contractors.”

Speaking to NBM&CW on the sidelines of the event on the promotional strategy for the graders, Mr. Nijhawan informed that, initially, they will promote the G75 grader through the company’s pan India sales network of 65 dealers, but to ensure adequate focus on the G75 grader, they are in the process of segregating key dealers, who will be supported by newly trained technicians. “As a part of our promotional strategy, we will offer optional value proposition to the customers through provision of dozers and rippers attachments. We are offering a one-year, unlimited hours warranty, eliminating customer’s anxiety on expensive repairs, based on Mahindra’s engineering and manufacturing capability, and use of the best components,” he said.