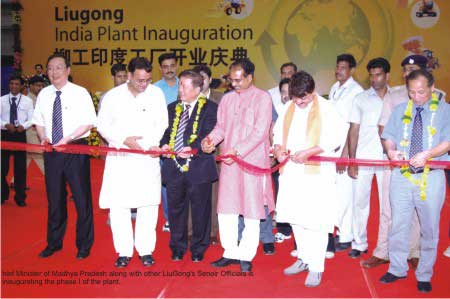 New greenfield production facility would add value to its equipment sales in India in the long–term. As it proposes to undertake production of assorted range of construction equipment under Liugong brand in tandem with production of wheel loaders. Partha Pratim Basistha reports after taking a round of the plant.

Liugong's mega greenfield facility at Pithampur in Madhya Pradesh owes its importance as it would go on significantly to support the state owned Chinese equipment major's ambitious growth plans for Indian construction and mining market. The company aims to be the third largest wheel loader manufacturer in India in near future, said Mr. Zeng Guangan, Vice Chairman & President, Liugong.

Spread on a total area of 1,77,000 square metres (44 acres), the-state-of-the-art facility has been planned in three phases. The newly inaugurated phase-1 of the plant, constructed at a cost of Rs 140 crores would undertake manufacturing of wheel loaders across all the models.

The mother warehouse is one of the significant supporting arms of the new facility as it would support the assembly line and concurrently meet the components requirements of the dealers. The company has an existing warehouse at Chennai.

Liugong plans to construct additional new two phases of the plant within the existing area involving an investment of Rs. 500 crores by 2012. Post commissioning of the proposed additional phases, the company will annually produce 2,000 units of wheel loaders, excavators, pavers, backhoe loaders, road rollers, motor graders, and other equipment. Initially, the phase–1 plant would produce 50 loaders per annum. However, the plant has the capacity to produce 3000 loaders annually.