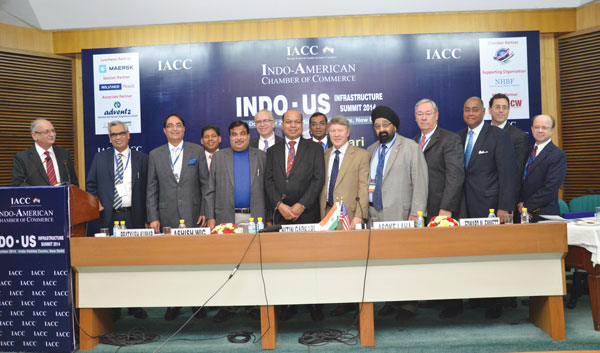 Accelerating the process of exploring newer business avenues in the surging Indian infrastructure sector, Indo-American Chambers of Commerce (IACC), the only bilateral chamber for the promotion of Indo-US business relations, recently organized a high profile one-day Infrastructure summit in New Delhi, where think tanks from the business bodies, policy makers, government heads, bureaucrats and a large number of infra builders from private sector participated and exchanged views to make the most out of the available business opportunities in infrastructure sector.

The Chairman Infrastructure Committee, NIC, Mr. Ashish Wig in his welcome address said that the significance of the summit gains more importance after Prime Minister of India visited USA in September last year when in a joint statement both the leaders, Narendra Modi and Barrack Obama, mentioned that in the infrastructure development of India an active participation of US Companies is vital and it must be encouraged further. In this connection, they coined a new phrase "Chalen Hum Sath Sath (Let's Move Together)" in the focused areas of Building Roads, Ports and Railways. It was also agreed upon that in the year 2015, USA would send two Business Delegations to India to explore the possibilities of forging JVs in these fields.

In fact, Indo American Chamber of Commerce along with its branch in Texas in USA took the lead and organized the first visit of US Delegations from Houstan, USA, comprising representative from all the three identified segments of infrastructure, he added. 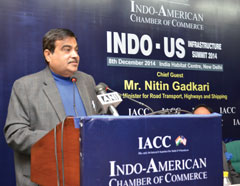 In his Inaugural address, Minister of Road Transport, Highways and Shipping, Nitin Gadkari, who was the Chief Guest at the function, announced that the government has fast tracked the entire process of clearances and project delivery mechanism. As a result of which a large number of global infrastructure investors and builders have started taking interest in the country's road and highway sector. Ending the decade old logjam, the government has cleared infrastructure projects worth Rs.1.5 lakh crore that were stuck due to various regulatory hurdles and it is currently in the process of creating a shelf of 500 ready to bid projects worth Rs.3 lakh crore. This is in addition to rolling out Rs.1.8 lakh crore, which were lying stalled. In total, the government is all set to roll out Rs.2 lakh crore projects this year, besides, building 1000 kms of expressways. Apart from this, it is also contemplating to build 2 lakh km of roads under public-private-partnership (PPP) mode which includes widening of existing 1 lakh km of highways as a result of which the PPP model will offer huge business opportunities to offshore investors. The minister also revealed that the government has set a target of awarding road projects with a length of 8,500 km during this fiscal as against a target of 9,638 km in the preceding fiscal. In view of the builders' half-hearted attitude for PPP model, the government has decided to award projects on EPC model, for the revival of this sector. A few foreign investors, including IJM Corporation Berhad, a leading construction group in Malaysia, have shown interest in the projects like Eastern Peripheral Expressway worth Rs.4,489 crore for a stretch of 135 km, Bhatinda-Amritsar worth Rs.1,899 crore for 175 km and Ambala -Kaithal worth Rs.878 crore for a length of 95 km and also for the Delhi-Jaipur Expressway. It is worth mentioning here that all these projects were bid under both models to save costs, time and uncalled for delay in the project awarding process.

Adding to the momentum, the Minister said that the government is currently concentrating on the cost cutting ensuring durability, quality and cost efficiency by building concrete roads using cement instead of bitumen in the country's highway sector. In this connection, initial evaluation indicated that the concrete roads are more durable, low on maintenance but cost around 10% more and the prices quoted by cement companies may narrow the gap to 2-3% and the original plan is to get the Transport Ministry to enter into long-term contracts with cement manufacturers to check against price volatility. Though the construction cost for concrete roads and those using bitumen become similar but the roads built by using cement don't need maintenance for 15-20 years, so the overall investment will come down. 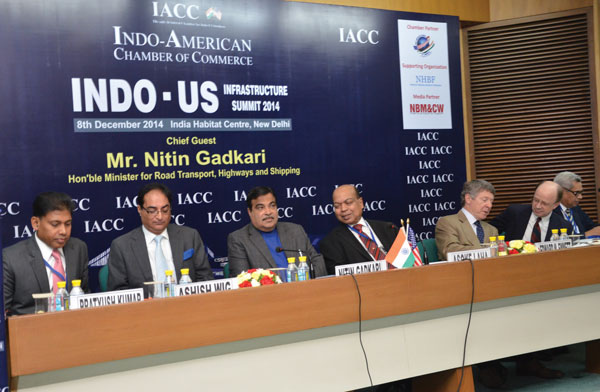 The welcome Inaugural sessions were followed by technical sessions on Ports, Highways and Railways.

Fast tracking the Port, infrastructure building process across ports in the country, the Minister disclosed that all the 12 major port trusts of the country have jointly decided to set up a new entity, which has been named as the Port Infrastructure Vikas Nigam Limited (PIVNL). The new company, which will solely focus on building world class infrastructure across ports, is being formed with equity stakes from all 12 major ports and Railway Vikas Nigam Limited (RVNL) with a 90:10 shareholding pattern with initial authorized capital worth Rs.100 crore.

Mr. J.P Batra, Former Chairman, Indian Railways, said in his Keynote address that the Indian rail sector has opened up huge investment opportunities for foreign players. The new government has fast tracked the project building process and outlined areas open for private and foreign direct investment (FDI) and also identified as many as 38 specific projects with potentials to attract FDI worth Rs.90,000cr. This also included some of the high profile projects like Mumbai-Ahmedabad high-speed corridor involving an investment worth Rs.63,180 crore. In addition, they also included a Rs.14,000 crore Mumbai CST-Panvel suburban corridor and a Rs.1,200cr coach manufacturing factory at Kanchrapara in West Bengal. The ministry listed 17 areas for private and foreign investment, including suburban corridor projects, high-speed train projects, freight lines, rolling stock manufacture and electrification including signalling.