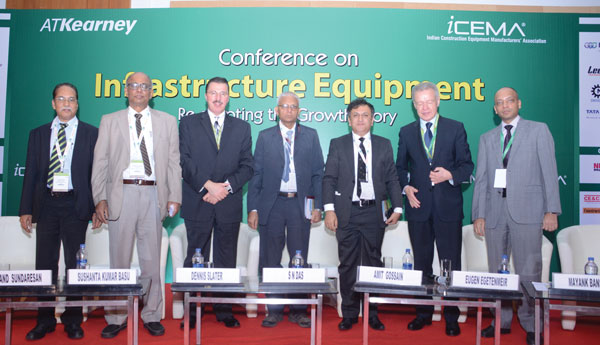 Addressing the audience including industry captains, think tanks, policy makers, and bureaucrats at the Indian Construction Equipment Manufacturers Association (iCEMA) conference held recently at the India Expo Centre in Greater Noida, President, Amit Gossain, in his address, said that things have started looking up in the country's equipment sector as 'Make in India Campaign' launched by the Central Government has drawn the attention of both domestic and global players engaged in equipment manufacturing and allied infrastructure activities. Adding to the momentum, he added, in yet another welcome move the Cabinet Committee on Economic Affairs has recently approved the long standing demand of iCEMA to set up a testing and certification centre for construction equipment and earthmoving machineries. In this connection, the Department of Heavy industries has played a pivotal role in the entire process of approval and that a detailed proposal to this effect has already been submitted by the industry body to the government, which has also cleared a sum of Rs. 400 crore for the proposed testing and certification centre.

Elaborating further he said adding that in view of the fact that road and highways sector is the focal area of the government's investment, the demand for the construction equipment is likely to pick up fast once the government speeds up the pace of project execution. Currently, things are not moving fast enough on the grounds and global investors are still in a wait and watch mode and waiting for the government policy initiatives to reflect on the ground. Ensuring this, the government must prioritize projects of national importance and ensures their speedy implementation and execution. After allocating adequate funds in its budgetary proposals for national highways and rural road sector, speedy execution of projects on the ground is the need of the hour, he insisted, stressing that currently there is a dire need of adopting speed, scale and skill in infra development, project implementation and that the industry must explore the emerging business opportunities in the recently launched initiatives like cleaning Ganga drive, Swachh Bharat and smart city concept as these initiatives are going to open up huge business avenues for both the construction equipment manufacturers and the infrastructure builders. He also welcomed the recent decision of RBI allowing banks to be flexible in lending loans to existing infra projects, which will go a long way to speed up infra building process across the country.

Addressing the conference, the Director General, (Road Development) Special Secretary, Ministry of Road Transport and Highways, S N Dass, said that India is currently in the midst of building huge road infrastructure across the country. The two flagship programs of the Government of India namely the National Highways Development Program (NHDP) and the Prime Minister's Gram SadakYojana (PMGSY) have been under implementation for quite some time now. He added that the success of NHDP, under which about 20,000 Km of National Highways were constructed in a span of about 14 years, averaging about 4 Km of road construction per day, was made possible only due to the adoption of mechanized construction techniques and the induction of modern equipment. Developing about 15 Km of road length per day and the plan to scale up and speed up this development program to much higher levels of 30 km of road length per day is a challenge. This means that there will be even more emphasis on road/bridge equipment. The Infrastructure Equipment Industry should factor this Government initiative in its growth and expansion program and come up with business plans to ensure that the supply meets the demand of the road sector. He said that not only the quantity but also the quality of equipment is a vital aspect, without which durable and sustainable development will not be possible, particularly at the speed of program delivery the government is planning. He urged the Indian Equipment Industry to focus on product quality, skill development, smart technology and become partners in developing capacity and expertise in construction, operation and maintenance of road infrastructure including concrete roads.

Giving detailed overview of the huge business opportunities for the construction equipment manufacturers in the upcoming 100 smart cities, Head Center for Excellence and Futuristic Development, Rajan Venkateswaran, said that building new cities is a way to deal with the rapidly urbanizing population of the country. The targeted investment worth $1.2 billion in these cities over a period of time will eventually open up huge business avenues for both urban infrastructure builders and equipment makers across segment. Currently, work on several smart city projects is in full swing including in the state of Gujarat. The major chunk of investment for smart cities will likely come from private developers and from countries like Japan. The Singapore government has already offered to build one smart city and the UK also extended a 1£billion credit line to help UK companies in building infrastructure in these smart cities and the infrastructure builders and equipment makers must exploit these business opportunities to the hilt, he insisted.

In his vote of thanks address, Vice President, iCEMA and Vice Chairman and MD of Schwing Stetter Inida, Anand Sundaresan, expressed his gratitude to Director General (Road Development), S N Das, for his views and comments on Government's initiatives for the growth and development of roads and highways in the country. He said that iCEMA conference provides a perfect platform to equipment makers, users, consultants including project agencies and technical experts. Indian infrastructure building targets have opened up huge business opportunities for the equipment makers across segment. In fact, the government plans to build concrete roads across the country and has opened huge business avenues especially for concrete equipment makers. That apart, even developers and builders are also increasingly going for high strength concrete especially for the highrise buildings and multistory structures, which in turn is resulting in higher demand for high tech batching plants and concrete boom pumps and also for concrete placer booms normally used for highrise constructions. But keeping the price sensitivity of the Indian customers in mind the equipment makers must roll out eco-friendly high tech products at the lowest possible price adhering to safety, quality, and environmental standards. Inaugural Session of the conference, which was attended by over 230 delegates, was followed by sessions on key infrastructure projects and equipment financing.