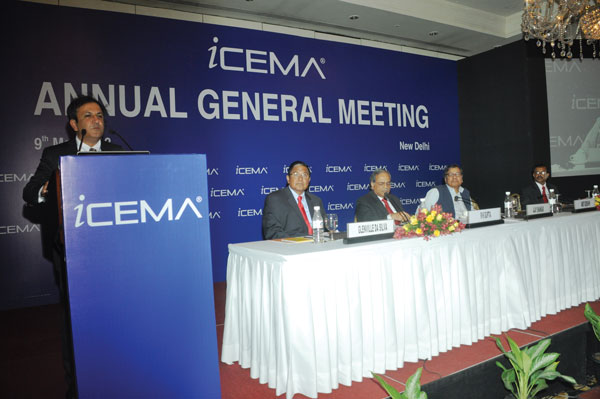 Addressing the audience shortly after taking over the reins of Indian Construction Equipment Manufacturing Association (iCEMA) as its newly elected President in an Annual General meeting (AGM) held in Delhi recently, Mr. Amit Gossain, Executive Vice President Marketing, Business Development & Corporate Affairs at JCB India, reiterated the body's commitment to work in close quarters with government, policy makers and other stakeholders to create a favourable environment to exploit the untapped potentials of the construction sector to the hilt thereby helping the construction equipment industry to grow at a faster pace and scales newer heights.

He further added that the panels will also look for setting up of independent facilities of the industry. Continuous skill development, alignment of activities to present government norms and policies are the added thrust of the panels whereas organizing conferences and seminars will also be on priority.

In his presentation, the Immediate Past President iCEMA & Vice President Business Development Asia, Volvo India, Mr. Glenville Da Silva, made a mention of umpteen business opportunities opening up for construction players from projects, which are being taken up in segments like railways and urban infrastructure. The government has accorded high priority to big ticket projects including dedicated freight corridor and speedy implementation of the PPP projects in the port sector. In fact, the iCEMA has in the past two years aligned itself with the global industry as a result of which India has now become the cynosure of global players, he said.

He informed that the Dedicated Freight Corridor project, being implemented by the Indian Railways through the Dedicated Freight Corridor Corp of India Ltd (DFCCIL), aims to connect the important freight lanes between Delhi and Mumbai in the west and Ludhiana and Dankuni in the east. Ensuring the smooth completion of the project, over 90% of the land acquisition along with environmental clearances have already been put in place. The remaining portion of the route falls in areas requiring alignment changes and the company will also accomplish the task in the next six months. In addition, the DFCCIL is going ahead with its concept of setting up multimodal logistics parks at 6-7 strategic locations. Outlining the mechanisation approach of the project, he said that ensuring quality, timely delivery and reduction in costs are high on the project agenda. The commissioning of the first phase has already started wherein the entire project is likely to be completed by 2017. 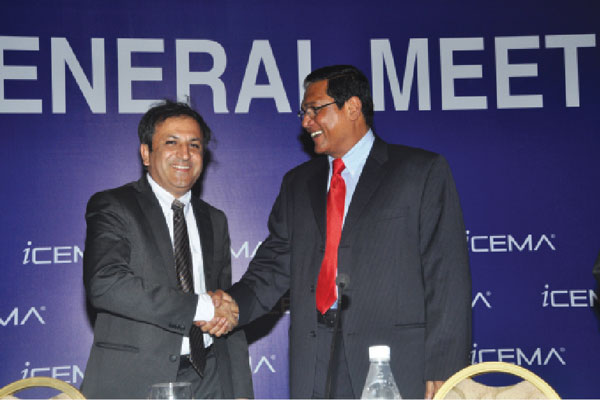 Drawing a rosy picture, CEO, Srei-BNP Paribas and Executive Committee Member iCEMA, D.K Vyas, said that with strong fundamentals of the Indian economy, demand for construction equipment is likely to be stable in the long run. Moreover, the government's initiatives reducing interest rates and directives given to NHAI by the transport ministry for streamlining and speeding up the project delivery mechanism and redressal of disputes on priority basis, are likely to push the pace of project delivery resulting in an increased demand for construction equipment in the near future.

In his address, Member Secretary, National Manufacturing Competitiveness Council, Mr Ajay Shankar, said that industry needs to think big and look ahead to solve the key issues such as acute shortage of skilled manpower. He called for a speedy implementation of iCEMA's efforts to institute a Sector Skill council for the construction equipment industry.

During AGM, it was also highlighted that the country's earthmoving and construction equipment (ECE) industry is very vibrant and poised to achieve a strong and consistent growth rate in the next two decades for which the government has set aside a staggering investment targets matching the burgeoning infrastructure deficit. The construction sector, apart from being a major GDP growth driver, is also the second largest job generator in the country, after agriculture. It provides a strong chain of backward and forward linkages with other sectors covering about 250 ancillary industries like cement, steel, brick, timber and building materials which are entirely dependent on the construction industry. In view of this, a unit increase in investment in the sector triggers a multiplier impact and causing a five folds increase in income generation capacities.

Growth in the construction equipment industry in India is directly linked to the overall level of infrastructure development as well as growth in construction activities. The industry has the potential to expand six to seven times - the total revenue which was $3.3 billion in 2010 is now expected to go up to $22.7 billion by 2020, concluded Accenture, in its research report carried out at the last Excon.