Gujarat-based concrete solutions provider Apollo Inffratech Group kicked off its 10th anniversary celebration with the grand inauguration of its new production facility at Ahmedabad Mehsana Highway. This facility is the outcome of the company’s recent joint venture with German company Zenith Concrete Block Making Machinery. The ceremony was presided over by Group Chairman Ajit Patel and Group MD Mitul Patel.

Chief guest Dy. Chief Minister Nitin Patel in his inaugural address congratulated Apollo and its management for taking forward the ‘Make in India’ vision of Prime Minister Narendra Modi and acknowledged that the Apollo Inffratech Group has been taking forward India’s vision of infra development by bringing world-class concrete technolo- gies from the best global sources.

He gave his assurance that the state as well as the Central government would foster a conducive environment for the construction equipment sector, with more business-friendly policies for companies involved in infrastructure development, so that the country could achieve its goal of developing world-class infrastructure. 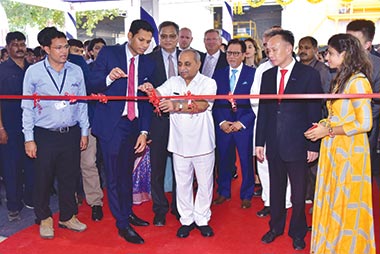 Mitul Patel, addressing the gathering, said that the Apollo Group has been growing and expanding over the years since its inception in 2008. It started by launching Concrete Batching Plants, Transit Mixers and Fixed Form Pavers, and when it saw a good opportunity in the concrete pipe market, it formed a JV with the over 100-year-old pipe making machinery manufacturer HawkeyPedershaab of USA and began making the machines in India.

He added, "Two years later, when Apollo saw the huge untapped market of self-loading concrete mixers, it established a JV with the world-renowned Metagalante of Italy and began manufacturing CARMIX mixers in its factory near Ahmedabad. We also have an exclusive technical alliance with USA’s HEM Slip Form Pavers. And, today, on 25th September 2018, we have once again taken a big leap ahead with the creation of our new entity ApolloZenith Concrete Technologies Pvt. Ltd."

Ajit Patel informed that hundreds of Apollo installations are working successfully in India, Nepal, Bhutan, Bangladesh, Sri Lanka and in African as well as Middle Eastern countries. "In this exciting journey of ten glorious years, Apollo has earned the respect of innumerable customers and won countless accolades from the industry. The presence of our valued customers, vendors, channel partners, dealers, employees and family members from across the country, today, has made the event even more memorable and we will cherish it for years to come," he said.