Futuristic Technologies that may come soon to India

Engineering breakthroughs, highly mechanized solutions, intelligent controls, compact designs for better maneuverability, and enhanced safety features showcased at Conexpo this year, indicated the advancements being made in the CE industry. These modern technologies are expected to be seen soon in India too. Advanced mechanization in equipment enables timely and better quality execution of projects. Engineering attributes closely indexed to the desired applications and worksite conditions enable higher levels of productivity while keeping operational costs low, and consequently, better returns on the capital invested. 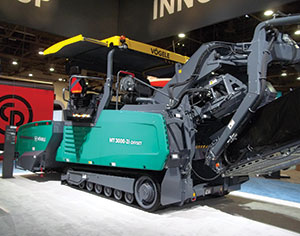 Depicting a high level of equipment optimization was Terex Power Screen’s new Premiertrak 600 diesel electric operated 600 tph jaw crusher. The equipment has a pre-screen, and the ability to lower and raise the conveyors for carrying maintenance underneath. Its engine cover acts as a dust suppression system. There is an option of closed side settings depending on the size of stones/fines that can be taken out through an additional conveyor attached to the machine. There is also an option of getting mixed products. Control systems at operator level enable the operator to start the equipment without getting on its top.

Construction and mining equipment giant Caterpillar has been carrying out design advancements in the buckets of its wheel loaders to enhance their productivity at quarry and aggregates sites. On display was its new L-series performance buckets that are set to replace the company’s existing H-series of buckets. The new buckets have a higher and broader opening for incremental loading of crushed aggregates, leading to a 7 percent higher productivity rate and reduced fuel consumption.

Putzmeister launched its new 47Z-meter truck-mounted concrete boom pump. The pump has a new design for its pedestal and five section boom for increased maneuverability, and reduced overall height. According to company officials present, it is the first Putzmeister pump to feature the new Ergonic 2.0 control system, with design enhancements aimed at improved operator experience and greater flexibility.

Volvo Construction Equipments (CE) has initiated advancements in its entire product line. It aims to deliver total lifecycle costs for its equipments. According to the company officials, Volvo CE has also been enhancing its product support services for its new products, and has put in place advanced telematics to monitor the performance of its six lakh machines that are connected globally.

Volvo Penta is in the process of working on its more advanced tier-4 stage-5 engines, which will have more installation flexibility, ease of operation and maintenance, reduced noise levels, exhaust after-treatment systems, and give higher output.

Wirtgen also showcased its new WR 250 stabilizers, 2200 SM and 2500 SM surface miners for salt, gypsum, and infrastructure applications. Wirtgen’s new range of 3800 CR road milling machines are fitted with a blender and come with the correct mixed design, and 12 feet cutters. According to the company officials, cutting tools in the surface miners can be provided based on the required performance of the equipment. Wirtgen also showed its new SP 25(i) SP 15 and SP 64 concrete pavers fitted with new tier-4 engines.

Vogele displayed its new Super 1700 3(i) paver that has a higher paving speed, and comes with ergo and basic control panel, and a canopy. Designed for undertaking shoulder paving, it has an intelligent emission system and improved conveying and bigger hopper. Advanced features include screed control mechanism and screed monitoring. Targeted for global markets, the paver offers wheel and rubber track option so as to work in higher gradients.

Kleeman, from the house of Wirtgen, exhibited its new range of MC 110, 28x44 mm tracked jaw crusher. Its prime feature is its portability and ease of transportation. Fitted with tier-4 engines, it has a diesel electric drive. Kleeman also introduced its MR 130, 36x50 mm impact crusher with constant feed system. It also demonstrated its new intelligent control system ‘Ispective’ with the panel fitted on the crusher to measure its hydraulic pressure, temperature, and stockpile information.

Hamm displayed its new Hamm H7 (i) v10 roller, which according to Hamm officials, has intelligent compaction, higher stability and better traction for working at higher gradients and slopes.

Atlas Copco unveiled its new Dynapac CC 4000-6200VI asphalt rollers, which according to the company, are extremely friendly, and have unmatched ease of operation, excellent visibility and the highest quality compaction. The engines have the latest emission reduction technology and their performance is enhanced by vibration frequency and an optional active front drum steering system with big offset that takes maneuverability to new levels.

The company also introduced its new CC 1200 VI and CC 950 tandem asphalt rollers. Targeted for small scale compaction work such as cycle paths, small roads and parking areas, the portable rollers have better visibility, ease of transportation, and enhanced performance led by mechanical adjustable offset functions. By adjusting the rear frame to the left by long holes, the operator can get an offset to the front drum. Offsetting the front drum, officials explain, makes it easier to compact close to walls and curbs without the risk of damage to the machine.

Other new products from the house of Atlas Copco were the MB 1650 hydraulic rock breakers with dust-proof and blank firing protection systems. The breakers can be mounted on 19 to 32-ton excavator platforms.

Gomaco displayed its new Commander-3 series of concrete pavers that have a self diagnostic system and hydraulically extendable tracks. Gomaco officials said that the paver has the ability to deliver the exact levels of vibration for the right paving quality and as per the specifications of the contractor.

French road construction equipment manufacturer Fayat disseminated information about its new Asphalt Manager Vibration System for its tandem roller. Based on the new vibration systems, vibration in the roller is bi-directional. With Asphalt Manager, the roller can adjust its settings as per the density of the asphalt and its temperature. Asphalt Manager prevents over compaction of the surface as this can result in defect and fracture of aggregates.

Company officials shared information on their new paver technology Cederapids, which facilitates extension of the hydraulic screed. Recent improvements on pavers include better heating of base plate for better transfer of heat and at faster levels by at least 50%, and a heavier screed for uniform laying of asphalt.

For quality road construction, Italian construction equipment automation provider, Moba, has come up with a new Pave-I-R-Scanner that facilitates thermal data collection when mounted on the paver from the laid asphalt. The scanner can do thermal imaging and also evaluate the temperature and display the variation. According to Moba officials, this enables the right levels of compaction for the desired road quality. Delivering the variations in the asphalt temperature, corrects the variations in the asphalt batch mix plants during the mixing stage. Proper planning for scheduling the trucks bringing the batched asphalt to the site from the plants for paving, can also be carried out.

Linden Comansa launched its new LCL 700 electric luffing jib tower crane, which is available in 64 and 50 tons. Company officials informed that by making simple modifications, the maximum load capacity of the cranes can be reduced to 32-25 tons, resulting in increased hoist speed and productivity. This change on the hoist system from double line to single pull line is one of the many improvements implemented in this model as per customer inputs. The radius of the counter jib is also extremely short at just 9.5 meters, with the potential to be reduced further to 8.7 meters by assembling the crane with steel counterweights, rather than the standard concrete counterweights.

CDE Global unveiled its new MM5500, E3X and E5X, 550 tph screening washing and stockpiling plants. According to company officials, the plants score high on performance and efficiency as they are capable of undertaking separation of five products in a variety of combinations. The equipment comes with triple pass fines washing systems for ultra clean sand and maximum removal of ultra fines. Added features include integrated stockpile conveyor for enhanced transfer point efficiency and single and dual sand production.

Technical advancements and additional features in the equipments displayed indicate the rising levels of project execution. OEMs venturing into global markets, including India, will have to acquaint the end-users of the technologies through intense buyer seller interface.