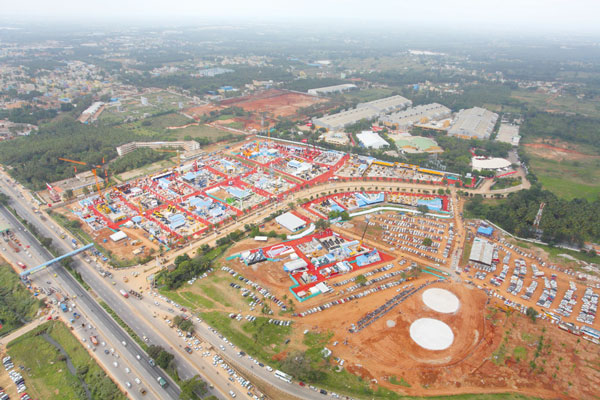 The eighth edition of the International Construction Equipment and Construction Technology Trade Fair EXCON 2015 organized by CII at the Bangalore International Exhibition Center (BIEC) Bangalore and inaugurated by the Minister of Road Transport, Highways and Shipping, Nitin Gadkari, concluded on a promising note.

Living up to its reputation of being the largest exhibition of its kind in South Asia, EXCON 2015, has attracted participation from 22 countries. Large number of exhibitors from Germany, China, Italy, Turkey, South Korea, United Kingdom, and other countries used the platform not only to exhibit their state-of-the art construction equipment but also to exchange information and ideas with regard to technology and expansion of their businesses. Exhibitors were exuberant that, as always Excon 2015 has attracted a large number of high quality visitors, most of whom were either decision makers or genuine buyers.

In his inaugural address, Mr. Gadkari said that road infrastructure is the lifeline of any country and reminded the audience of the then US President John Kennedy's speech in which he mentioned that American roads are not good because America is rich but America is rich because American roads are good. In view of this, for progress and prosperity India needs good road infrastructure and this evoked overwhelming applaud from the audience from the hall, which was packed to the capacity. He said that infrastructure development is highly essential for the progress of the country and the need of the hour is quality construction, good equipment and an intelligent approach and exhorted the industry to explore the possibility of using bio-diesel or ethanol in construction machinery as it would aid in reducing pollution and also be in sync with the government of the day's vision of a clean India that is free from pollution and also urged the industry to manufacture quality equipment and machinery for tree transplantation to assist the green roads policy of his Ministry.

Dwelling in details on the future roadmap of his ministry, he said that the government has decided to increase the national highway road length from the current 96,000 to 1,50,000 kilometers. Apart from this, it is also planning to build express highways between Delhi and Srinagar, Mumbai and Nagpur and for this the government is also exploring the usage of waste material such as oil sludge in the construction of roads, making it more environment- friendly. For the shipping sector, the government is planning new ports including Kolachel in Tamil Nadu, Kandla in Gujarat and Sagar in West Bengal as these ports would go a long way in speeding up the movement of goods and services at a cheaper option than the highways. He also mentioned that there is a plan to convert 111 rivers into inland waterways as the current government has targeted to add 2% to the country's GDP in two years and to add 50 lakh jobs over the next five years.

Addressing the gathering, President, Confederation of Indian Industry (CII), Sumit Mazumder, said that India has achieved a 7.4% growth over the last decade and the IMF projected the growth rate of 7.3% in 2015 and 7.5% in 2016. CII is optimistic about maintaining this pace of growth over the medium term with further acceleration in later years. The industrial growth is on steady upward path led by higher growth in the manufacturing sector. He said that the country would continue to offer huge markets due to its vibrant infrastructure and real estate sectors. Railways road and highways, power, ports, and airports offer big investment potential. Within the current ecosystem, CII is taking up the promotion of capital goods industries and believes that with a strong and coordinated approach of Government and the private sector, India can build an advanced and robust base of capital goods.

Chairman, EXCON 2015, Vipin Sondhi, while delivering the theme address said that the industry witnessed a tough time during the past 36 months but there has been some stability right now. Excon remains the preeminent construction equipment exhibition growing into South Asia's largest platform for propelling sustainable infrastructure growth not only in India but increasingly with an international flavor. Infrastructure growth is an absolutely critical enabler and probably the biggest multiplier for sustained economic growth and very importantly job creation as well. This edition of Excon 2015 witnessed the participation of 810 exhibitors from 22 countries.

In his welcome address, Director General, CII, Mr Chandrajit Banerjee, said that EXCON is the largest such event in South Asia that has increased ten fold in the past 15 years and is CII's largest event in this sphere. He said that the presence of Gadkari is in fact a great encouragement and inspiration for the industry as he showed formidable acumen in fast tracking and cutting bureaucratic delays.

President, iCEMA, Anand Sundaresan, complemented the Government of India on the significant growth witnessed in the road sector. Industry production clocked higher than expected, however the construction industry went through a decline. EXCON has contributed to the adoption of latest machinery and technology in the construction industry in India. iCEMA will continue to work closely with ministry of road transport and highways and extend its full support to ensure world class technology and equipment for building world class national highways and allied infrastructure across the country.

India a gateway for foreign investors

This edition of Excon attracted a large number of high quality visitors including decision makers and equipment buyers. Commenting on the emerging scenario in the Indian equipment market, Marketing Support, Department/Strategy Division of Korea Construction Equipment Manufacturers Association (KOCEMA), Sang-Dok Yim, opined that it is an opportune time for companies to invest in India as it is an emerging market for global players. Reposing his confidence in EXCON 2015, he said that one can expect more Korean companies to invest in India in future. This was echoed by SPECO, a South Korean company dealing in asphalt mixing plant, which has been participating in EXCON since its first edition in 2000.

The 'Make in India' initiative also drew lot of appreciation from international participants with Chinese company Luoyang Longda Bearing Co., planning to open an office in Kolkata. Zhou Weidong, Vice President and Senior Engineer, China Council for the Promotion of International Trade (CCPIT) representing China Chamber of International Commerce (CCOIC) and Machinery Chamber of Commerce said that Chinese companies are seriously looking at JVs with Indian companies in the construction equipment industry. Li Yunsheng, Senior Engineer of China Construction Machinery Association (CCMA) and Du Song, of CCPIT said that with its fast growing economy and a promising construction equipment industry, India shows that it is a very important market for countries like China as it offers huge opportunities especially in infra and construction equipment sectors.

Likewise, Germany also sees huge prospects in participating in India's exciting infrastructure growth story. Sebastian Popp, Deputy Managing Director, Construction Equipment and Building Material Machinery (VDMA) said that visibility of India and the Indian economy has increased phenomenally over the past few years and the country's future potential is being played out to prospective investors with aplomb. The investment climate in the country is continuously improving and in the construction equipment space alone companies are already active in India. In the latest edition, a total of 31 companies from Germany participated in EXCON. With the construction equipment industry picking up growth momentum, EXCON 2015, which is generating positive energy and enthusiasm from global and Indian players alike, will act as a catalyst to further boost growth prospects.