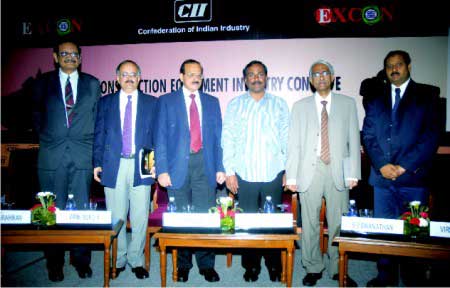 Confederation of Indian Industry (CII), Karnataka, launched its 2009 edition of Excon, at a high-level symposium, at Bangalore in December 2008.

Participants from different sectors of the Infrastructure industry had a great opportunity to listen to speeches by eminent industrialists, both from the CE industry, as well as other areas like Infrastructure Finance, Support and Technology, reports Rajini Shankar.

The function was presented by Mr S Viswanathan, Chairman, CII, Karnataka State Council, who highlighted the uniqueness of content and the innovative ventures of Excon, improving its objectives, features, and reach, year after year.

He also announced that 26thto 29thNovember 2009, would mark the holding of the 5thEdition of Excon. Asia’s third largest CE and Construction Technology exhibition is proposed during that period.

Chairman of Excon 2009, Managing Director and CEO of JCB, Mr Vipin Sondhi in his address highlighted the noteworthy components of Excon 2007, and said, “Excon 2007 had about 285 exhibitors and the main attractions of the event were live demos of equipment, International participation and above all International CEOs participated in an interactive panel discussion.”

He referred to the stupendous growth in the Indian CE market, prior to the market crash. But this situation has decelerated sharply during April – November 2008.

The causes of deceleration were Liquidity—stock market collapse, NBFC finances to CE and construction, PSU banks flush with funds, not keen on funding CE, and reduction in CRR interest rates by RBI.

Pump priming Investments in infrastructure projects and fast tracking of existing projects and monitoring progress closely and push for speedy completion was the solution suggested by him along with, visibly increase liquidity flow to this sector.

Mr Nayak concluded on a positive note "We still need houses to live, we need roads for the urbanized sectors and the rural sectors for connectivity, so we would survive this setback and come out of it.”

The Chief Guest of the function, Honourable Minister for Tourism and Infrastructure Development, Govt. of Karnataka, Shri Janardhana Reddy, in his opening remarks, congratulated the efforts of CII and how CII and Excon were jointly cementing the Construction Industry and an economy.

Stressing that rapid growth can be achieved only through construction technology; Mr. Reddy suggested that Infrastructure should meet agricultural and rural sectors too. The government of Karnataka, aims to establish the state of Karnataka as a ‘Role model for Infrastructure development by formulating a set of several policies for better power, tourism and good roads. 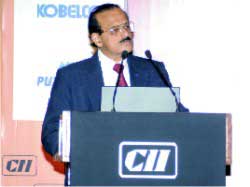 Mr Anurag Behar, chosen by the ‘The World Economic Forum’ as one of the ‘Youngest entrepreneur of the year 2008’, for his social initiatives for WIPRO Infrastructure Engineering, spoke about the global slowdown, and the possible remedies to combat this, on a rather philosophical note. On a business solution mode, he mentioned that, while many sectors in our country were getting re-aligned, the Infrastructure segment has remained unchanged, urging the industry experts and all the participants to invest in changing the Infrastructure area, he also mentioned, that the next five to seven years are not going to be the same as the last five years.

Mr Vikram Sharma, President and CEO, Kobelco, presented his views supported by exhaustive data about the industry. He expressed deep concern over the shockwave that had hit the industry, recently, when the stock markets crashed.

Mr Param Sivalingam, CEO, Construction GMR, made an informative presentation and action plan to fight the current market crisis. According to him, the current economic scenario has impacted GMR's business only in the short term.

Mentioning of GMR foraying into Construction EPC business, he shared with the delegates, the group’s infrastructure pipeline’s current scenario.

Mr Mohanty, Exectuive Director, SREI, Kolkata, the last speaker of the delegation, made a simple, but clear analysis of the situation and offered befitting and practicable solutions for the current slowdown, so typical of his finance profile.

The post-tea session was flawlessly co-ordinated by Mr Mrityunjaya Singh, Managing Director, Volvo CE, Bangalore, with perfectly timed views of the delegates, speakers, interactive session between them, followed by interesting questions from the media and general participants.