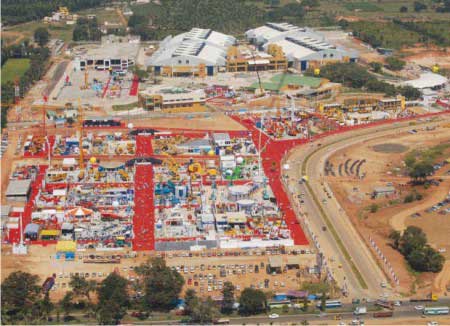 The 4th edition of Excon 2007 India's far most Construction Equipment and Construction Technology Fair organized by CII in sponsorship and co-sponsorship with country leading companies culminated successfully in Bangalore. Over the moon, was the myriad expressions that came out at the end of this mega five day event, report, SKK, S. A. Faridi, P. P. Basistha & Mariya Rasheeda. With over record 45,000 visitors and more than 700 new products unveiled, the event generated more than 35,000 business leads and initiated more than 10,000 deals for the exhibitors. The show also transacted over Rs 2000 crore worth of business enquiries generated, says a statement issued by CII.

Over 280 companies from India and overseas participated and showcased a wide variety of equipment, technologies, products and services with focus on efficiency, productivity, environment and safety under one roof. Several companies presented and demonstrated latest developments and advancements in construction equipment technology and products to reach out the users. The five day fair spread out over 1,10,000 sq.mtr. of area and witnessed a number of state-of-the–new construction equipment launches. Coinciding with the exhibition a 3–day international conference on Construction Equipment industry, coordinated by IECIAL and a CEO panel discussion was also organised. Over 20 CEOs made presentations on ECE industry and over 250 business delegates took part in the conference. The conference sought to highlight opportunities and challenges in CE industry pointing all that Indian CE industry is poised to emerge as a global manufacturing hub for earthmoving and other equipment.

Speaking at the Concluding session, the Chairman Excon 2007, Mr. Vipin Sondhi, the Managing Director and CEO, JCB India said that Excon has generated much interest among the industry players in India and overseas and most of them have used this opportunity to launch new products and meet potential customers. Talking about the interest of overseas participants, he said, the international delegates were of the view that the exhibition has helped them to identify strong partners and distributors and are confident that these networking opportunities at Excon 2007 will help them in growing their businesses. The Indian players were very much buoyant about the future prospects of the industry. They felt that global confidence in the booming economy at home, robust growth of the infrastructure sector and positive growth forecasts present a huge opportunity to the construction equipment industry. The domestic players felt that the industry is not shying in investing in R&D and has the ability to develop technologies that could establish international benchmarks. 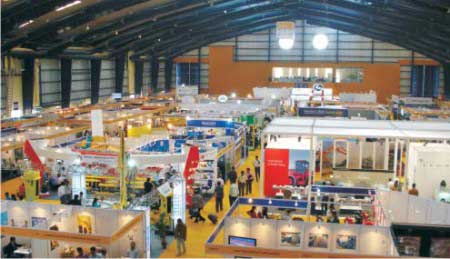 On day one, Excon 2007 was inaugurated by the Governor of Karnataka, whose inaugural address was read out by the Additional Chief Secretary. He in his address asked captains of the industry to set up Training Institutes in the state to train manpower in the use of construction equipment for higher performance in the execution of important infrastructure projects. There was a need for the industry to manufacture construction equipment suitable to rural areas and thereby facilitate active participation in the faster completion of rural projects, he added.

Earlier in his theme address at the Inaugural session, Mr. Vipin Sondhi, Chairman, Excon touched upon the provisions for infrastructure in the draft 11th Plan which allows for increased investment in the development of infrastructure across various sectors.

Day two of the Excon 2007 saw stalwarts from the industry addressing on the pressing issues and challenges confronting the industry. They included Mr. J P Nayak, Chairman, CII National Committee on Capital Goods and Engineering, Mr. Vipin Sondhi, Mr. Shree Ramji Upadhyay, CMD, Mahanadi Coalfields, Mr. Rajat Dhawan, Partner, McKinsey and Co. and Mr. S K Mittra, Chairman, Indian Earthmoving and Construction Industry Association Ltd. Providing affordable finance packages to the customers happened to be one of the biggest challenges before the industry, they said. The industry was cautioned about the import of second hand machinery into the country and large scale import was affecting the performance of the industry and leading to in ordinate delays in the implementation of projects, was the other pertinent issue which should engage the attention at the policy making level, was the common refrain 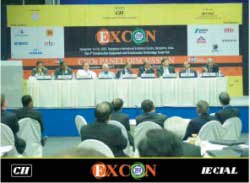 CEO Panel Discussion session was another highpoint of Excon. On Mckinsey report about the potential of industry at $12 to 13 billion, the panelists felt that the actual potential of the industry could be closer to the $25 billion mark. Mr. T Nakai, Managing Director, Kobelco International, initiated the discussion with a brief about the company and its interest in Indian market. Mr. Ranaveer Sinha, Managing Director, Telcon elaborated on Telcon and spoke about the huge growth witnessed by the industry over the last five years. Giving the example of Telcon, he said that five years back the company had turnover of Rs 500 crore which today has grown fivefold to Rs 2500 crore.

Mr. Taylor of JCB Excavators said that the only way to tackle the exponential demand as being witnessed today is to understand the basic needs of the consumers and create a value position. Mr. Jamshyd N. Godrej, Chairman, Godrej urged that beneficial policies and transparent processes to be adopted by the Government to help fuel the growth of the industry. Mr. Wedekind, President, Region Asia,Volvo, stressed that his company was very bullish not just in India but in Asia and Volvo was looking to expand its presence in the region. Mr. V.R.S Natarajan, CMD, Beml elaborated on the evolution of the construction equipment industry in India. Mr. J P Nayak, President (Operations) L&T, said that the growth potential of the industry is

unprecedented. However, there is a concern. The imported goods at present enjoy an advantage over domestic products. There is no level playing ground and the competition is not happening on an equal footing.

At the conclusion of Excon 2007 on November 18, 2007 and its other events coinciding with it, a feeling of deep satisfaction was writ large on the faces of the organizers, exhibitors, visitors and the industry. For the organizers, it was a job well done. A mega show of various construction equipment and services presented under one roof, meticulously planned and efficiently executed which worked like a well oiled machinery. For the exhibitors, it was a worthwhile exhibiting experience, indeed heartening to have a large number of enquiries about their products and services. Enquiries turning into orders and negotiations culminating into business deals and inking of agreements, bringing all the cheers despite encountering heavy traffic holdups in the way to reach the venue. For the visitors, it was good to see a wide variety of displays and hitech audio visual presentations. And above all, for the construction equipment industry, an upbeat mood, looking forward to promising times ahead.

Mobile Cranes: There were 10 crane suppliers including 3 Chinese manufacturers in India.

Hydraulic Excavators: There were 13 suppliers present in the market.

Crawler Dozers: There were 9 suppliers including three from China.

Wheeled Loaders: There were 4 local manufacturers and nine importers.

Backhoe Loaders: There were 6 suppliers present.

Motor Graders: There were 10 suppliers including four from China.

The Lighter Side of Excon 2007

Reaching Bangalore International Exhibition Centre proved to be an uphill task for the delegates, exhibitors from city hotels. To and fro journey was a tedious one due to traffic snarls and weak connectivity as the main road was full of potholes giving a bones rattling experience until one reached the destination to have a sign of relief. All were really Bangalored by this experience.