CCCME's Belt & Road Business Summit held during CICEE exhibition in Changsha, was attended by senior officials from the embassies of the different countries in China. They discussed issues concerning infrastructure and construction machinery, the investment environment and opportunities, policies and projects. 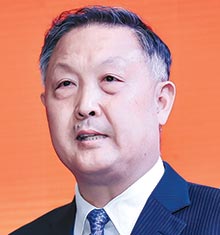 ZHANG Yujing, President of China Chamber of Commerce for Import and Export of Machinery and Electronic Products (CCCME) was applauded for creating the platform to strengthen China's business prospects with other countries. The event also gave an opportunity to highlight the efforts made by China under the leadership of the country's President H.E.M. XI Jinping to strengthen ties of friendship, solidarity and cooperation in the world, particularly through initiatives such as the Silk Road Economic Belt and the 21st Century Maritime Silk Road, both of which have attracted the world's attention.

Mamdouh SA, Minister Plenipotentiary Commercial Embassy of The Arab Republic of Egypt presented his country's investment information, incentives, and policies, and reviewed the model of investment cooperation between Egypt and China.

He informed the gathering that the past three years have witnessed a boom in Egyptian-Chinese bilateral relations, which led to a strategic partnership during the historic visit of the Egyptian President Abdelfattah Al Sisi to China in December 2014. According to statistics of 2016, China is Egypt's major trade partner with trade volumes between the two countries touching nearly 11 billion US dollars.

China ranks 21st amongst other countries investing in Egypt, with about 1320 Chinese companies with a total investment of US$7.2 billion, currently present in Egypt. To create more joint ventures within the framework of the comprehensive strategic partnership and the Silk Road initiative, the two countries have signed a framework to raise the production capacities in Egypt, whereby a number of priority projects can be implemented between the two countries. Currently, there are 18 projects in the field of energy, transport, infrastructure & industry.

Egypt and China signed a joint cooperation agreement under the Belt & Road Initiative during the visit of the Chinese President to Egypt in early 2016. Egypt is one of the first countries to support China's Silk Road initiative as it realizes the importance of the Silk Road in enhancing and revitalizing economic cooperation between countries.

Egypt is an important trade hub along the maritime silk route due to the historical and strategic importance of the Suez Canal in facilitating international trade movement and in linking the three continents of Africa, Asia and Europe. In this context, the Egyptian Government has announced a National Project for Suez Canal Development, which is fully harmonized with the Belt & Road Initiative. The Suez Canal is considered the most important navigation line in the world as one-tenth of the world trade goes through it, in addition to 22% of the world container trade. This encouraged Egypt to implement its National Project with the inauguration of the New Suez Canal in August 2015 (Egypt's gift to the entire world), which will decrease the Suez Canal's transit hours from 16 hours to 11 hours, so the world's trade will move faster, shipping cost will be reduced, and the number of vessels passing through the Canal will increase to 97 vessels per day. The project will develop about 76,000 sq.km on both sides of the Canal, which will create more than one million job opportunities in the next 15 years. 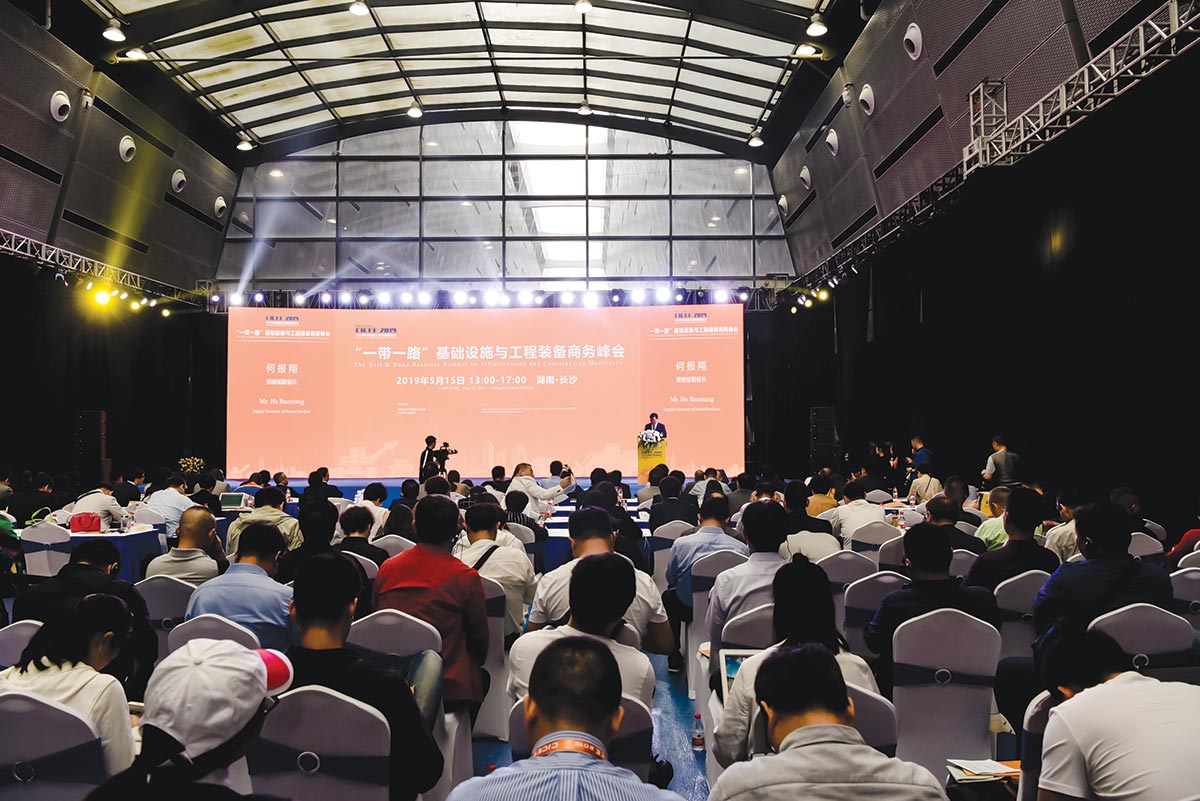 The Egyptian government is currently implementing an ambitious economic development strategy 2030, which targets growth rates up to 12% by 2030, through adopting some new economic reforms and policies, foremost of which is attracting more foreign investment with more incentives and guarantees.

H.E.M. Ahcène BOUKHELFA, Ambassador of Algeria, informed that the Algerian road network is amongst the densest in Africa with over 112,000 km of roads and highways of which 30,000 km are national roads. The East-West Highway is a major infrastructure project with a 1200 km-long highway linking Annaba in the extreme east to Tlemcen in the far west. (A large part of this highway was made by Chinese companies). Algeria is also crossed by the Trans-Sahara Highway, which is now completely paved. This road is supported by the Algerian government to increase trade between the six countries it trespasses, namely, Algeria, Mali, Niger, Nigeria, Chad and Tunisia.

Algeria has 36 airports, of which 16 are international, and there are 45 maritime infrastructures. For the railways, Algeria has a network spanning over 4498 kms. The road and railways facilitate access to border markets, the Mediterranean Sea on the north, and to all the regions in the world. As a key industry for Algeria's economic development, the construction machinery and modernization of infrastructure are the top agendas of the country, and many construction machinery companies have recognized Algeria as an important market in Africa.

Algeria and China established diplomatic relations about 61 years ago. Over the years they have been supportive of each other with regular political exchanges, consultations and coordination in all matters of mutual interest, including their business communities and the people at large. China is the largest supplier to Algeria and there are over 1000 Chinese companies operating in Algeria in different economic fields. The number of Chinese workers in Algeria has surged to about 50,000, making Algeria host to the largest Chinese community in North Africa and one of the largest in the African Continent.

During 2015 and 2016, Algeria and China signed an MoU for Industrial Cooperation and Investment and a Framework Agreement on Production Capacity. These important agreements will contribute towards increasing the number and quality of Chinese projects in Algeria, especially in the field of infrastructure and Construction Machinery.

Kazakhstan is the largest and most developed economy in Central Asia, accounting for more than half of the region's GDP. Its economy is primarily based on its large hydrocarbon and other mineral resources. The economic scenario is relatively good and growing despite certain negative external factors such as fluctuations in global commodity markets. The country's economy grew by more than 4% in 2018 and the same numbers are expected for 2019.

Situated between Europe and Asia, Kazakhstan has a huge transport and logistics potential and was among the first countries to engage in international cooperation for the Belt and Road Initiative, which was initially announced by President Xi Jinping during his visit to the country way back in September 2013. As a member of the Eurasian Economic Union (the leading economy in Central Asia), and a "good neighbor" in a vast region that encompasses India, Iran, Pakistan, and the Middle East, Kazakhstan is expecting to benefit from the Belt and Road program. By improving its transport infrastructure, it aims to become a major transport and logistics hub in Central Asia.

Kazakhstan's construction sector is set to register strong growth over the next five years, particularly in the transport, residential and non-residential sectors, which will benefit from Chinese investors looking to boost Trans-Eurasian logistics capacity and strong structural demand. External funding from international financial institutions like the Asian Development Bank (ADB), European Bank for Reconstruction and Development (EBRD), and the Islamic Development Bank (IDB), as well as the Asian Infrastructure Investment Bank (AIIB) will be integral to fueling growth in the construction and infrastructure industries of Kazakhstan.

While the oil and gas sector will be the major purchaser of construction and engineering services for years to come, there is a strong demand for these services in many other sectors. These include construction, renovation and conservation of industrial and public utilities, and development of industrial and logistical parks. With government plans to invest more than 4 billion USD for major road construction projects, manufacturers of heavy earth moving equipment and road construction equipment might find good opportunities in the market.

In order to create favorable conditions for investors in Kazakhstan, a number of special economic zones were created with the necessary industrial infrastructure, tax benefits and preferences. Four of those zones managed by the Samruk-Kazyna Fund will have a special focus on petrochemical and agrochemical industries, transport and logistics. The Fund is open to new investment opportunities and partnerships with investors in Kazakhstan, including co-investing and providing full support when dealing with companies and the Government.

Giving an assurance of the highest standards of corporate governance, transparency, and a very long investment horizon, Iskander Baitassov invited Chinese investors and sovereign fund managers to create partnerships and joint funds both in Kazakhstan and abroad. He welcomed Chinese construction machinery producers to consider their special economic zones to set up production lines in Kazakhstan.