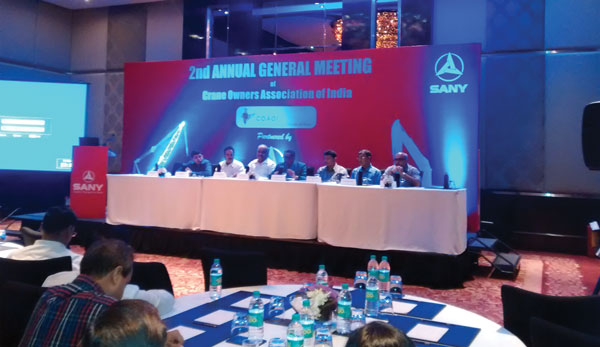 P.P. Basistha
The second annual general meeting of Crane Owners Association of India (COAOI) sponsored by Sany Heavy Industries India was held on 20.09.2014 in Mumbai. Members present in the meet discussed numerous issues being faced by them and crane renting firms along with new achievements of the association. The gathering also deliberated and debated strategies to address the issues.

Delivering the key note address, Mr. Ashwin Gandhi, President, COAOI & Director, Express Equipment Rental & Logistics Pvt Ltd, Vadodara, Gujarat, said, "There are numerous issues being encountered by crane owners across the country. To give a better voice to the association, it is important to enroll enhanced numbers of crane owners from various states and cities across the country." He added "COAOI has recently become member of Confederation of Indian Industry (CII), as it will facilitate better presentation of the issues to the Union Government." He informed that the association will soon have a meeting with Union Transport Minister, Mr. Nitin Gadkari for facilitating towards obtaining of national permit for mobile tyre mounted cranes so as to avoid different RTO tax of states. Service tax should also be payable by 'service receiver' and not 'service provider' as in case of transport companies.

Mr. Gandhi further said, "Another major achievement has been obtaining refund of RTO tax from Gujarat Government along with interest at the rate of 9 percent to the crane owners under the directives of the Gujarat High Court, which gave a ruling in favour of his company." He said, "It is necessary to resolve the issues of road tax as well as entry tax paid by crawler crane owners and charged by states of Andhra Pradesh, Rajasthan and Kerala."

Members of the association expressed concern on undue delay in payment of hire charges by clients and in some cases complete avoidance of payment by some crane users involved in development of major projects across industry sectors. They said that the issue has been assuming serious proportion in the recent years. It is an irony that in numerous cases it happened that one member who has been refused payment by the contractor/client, quitted the job or withdrew their crane/equipment from a site, but only to see that another member provides the crane/equipment at the same site, and then facing non-payment of hire charges to both the crane owners. Members urged the association to circulate the names of the such parties defaulting on the payments in COAOI's website. A senior governing member of the association said, "Collective avoidance of the members of COAOI to the defaulting party will deliver the right message to such a client as well as not to withhold payment of hire charges in future." Members highlighted double taxation issues to governing body members on purchase and sale of cranes as well as VAT & service tax on hire charges.

Delivering the concluding address, Mr. Deepak Garg, CEO, Sany Heavy Industries expressed concern on the issues being faced by the members of the association and endorsed that it was quite essential to increase the size of the membership to provide a better voice to the association. He said, "Sany Heavy Industries India was committed to serve members of COAOI through varied product offerings and tailor made customer support packages." Sany also offered training of operators at their Pune facility on simulators & also on crawler & mobile cranes.

COAOI has been recognized by many manufacturers / suppliers of cranes & spares, like KOBELCO, ABG, ACE, LIEBHERR, XCMG, SANY, TEREX, VOLTAS and TADANO. CEO of TADANO proposed to meet all the members of COAOI in a gathering around 20.10.2014 at Mumbai.