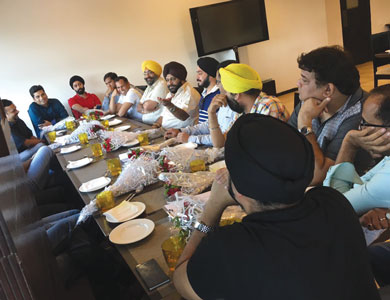 The newly launched Construction Equipment Rental Association (CERA), which is the first of its kind in the country, recently organized its brainstorming sessions in New Delhi. The first two meetings were turned out to be a big draw. The body is currently focusing on the membership drive and aimed to play a pivotal role at national and international levels in redressing the grievances of rental equipment members, said Secretary General, Mr. Satin Sachdeva adding that members appeared delighted and very enthusiastic during detailed deliberations while sharing their views and common grievances. They were very confident and unanimous that the body would act as a savior in its grievance redressing mechanism and will also work for the welfare of entire rental equipment community.

In his opening remarks, Mr. Satin Sachdeva welcomed the members and thanked them for sparing their valuable time to attend meetings and share their common concerns related to Construction Equipment Hirers & Rental companies. He reiterated that the association will largely remain focused on the common welfare, lapses in the rental hiring equipment business and reassured that the association will go a long way to benefit its members and those engaged in the construction equipment renting and hiring business.

Expressing his anguish, Mr. Kaushik Agarwal of Cygnus Equipment & Rentals (P.) Ltd. said that his major concern is related to Work Order Format and its authenticity which carry strict norms wherein the work order must have some weight-age so that no company can breach the same. He also expressed his concern over rampant defaults and inordinate delay in payments. Likewise, Paritosh Manocha from G.T Infra Structure echoed this viewpoint and reiterated that major concern again is payment pangs and to resolve this he suggested an interest clause to add in the Work Order Format wherein the delay in payment should impose some penalty or interest. Score of other members expressed the same sentiments. He further suggested that the flexi hours' clause should be converted into a day shift or at least the idle day should be counted as working day.

Addressing the gathering, Mr. Deepak Malik from Kuber Enterprises, said that there should be a strong debt recovery or legal team under the flagship of Construction Equipment Rental Association (CERA) wherein every single member will be benefited. To achieve this goal, there should be an unflinching unity among all members and they should surely shell out funds for the purpose; the other members present also appeared unanimous on this score. Narender Singh of Haryana Earthmovers shared his concern on the shortage of skilled manpower including operators, technicians and mechanics among others. Apart from this, he also expressed his anguish over theft cases largely taking place due to few notorious operators deeply involved in diesel and spare parts. To tackle the menace, he suggested a mutual bond or an authentic agreement to be signed by all the operators including those who are hiring manpower and equipment. Mr Rajesh Aggarwal of Jindal Infrastructure Pvt. Ltd emphasized majorly on the core foundation wherein each member should be benefitted along with the strong values. These apart, Mr. Manoj Agarwal from Agarwal Earthmovers, advised that everyone must quote rental amount or rates according to the manufacturing date and year of a particular machine wherein new asset should be quoted with more rental value as compared to older ones. Mr. Pavan Bagadia from Revival Infra Solutions suggested a Directory of All India Rental providers for the benefit of entire rental industry, Mr. Harjeet Singh and Mr. Gurjot Singh from Wahi Transport & Satvinder, were among the others who also shared their viewpoints at the meetings. Mr Suchit Aggarwal from R.V Group advised for a unity amongst all and a bigger vision for the association. Mr. Anand Singh from Sandmark Ventures also shared their due concern on faster and authentic recovery process which is a win-win situation for all. Mr J.S.Anand from Anand Infra Equipment was deeply concerned about few renowned companies who are not releasing the payments. The concern is really serious as major chunk of money still stuck with such companies.