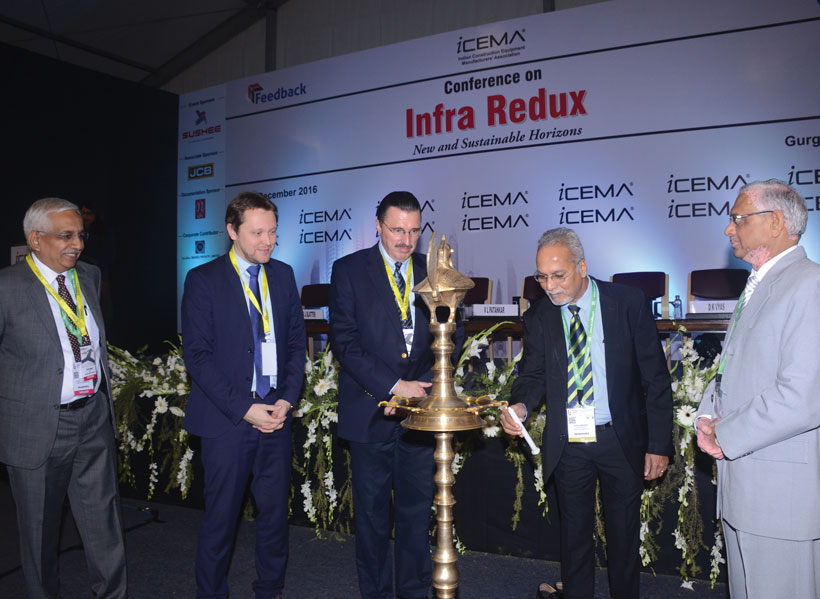 Coinciding with Bauma Conexpo India 2016, a conference on Infra Redux – New and Sustainable Horizons', was organized by iCEMA that provided an ideal platform to demonstrate the revival story and evolving growth trends of Indian infrastructure.

Welcoming the exhibitors, participants, and visitors, President, ICEMA and Vice Chairman & Managing Director, Schwing Stetter India, Anand Sundaresan, said that India's infrastructure sector is poised to grow significantly with the increasing demand for development of key infrastructure projects including roads & highways, rural connectivity, and urban infrastructure such as metro rail projects, ports & airports, industrial corridors and smart city projects. A slew of reformative measures including a move to hike total outlay for infrastructure to $52 billion have further added to the momentum and injected the much needed boost to the CE industry. Moreover, in the recent Union Budgets, infrastructure remained a priority and focused area for the policy makers, and this was indicated in the marked improvements in the pace of projects' delivery, their implementation and executing efficiencies, he said.

Delivering his speech as the Chief Guest at the conference, Director, Indian Academy of Highway Engineers, Ministry of Road Transport & Highways (MoRTH), V L Patankar, reminded the audience that the past two decades have witnessed heightened pace of road and highway construction in the country. To further push the pace of road building, the government has envisaged staggering investments of $385 bn for infra sector by 2019 and also the infrastructure spending is expected to grow from 7.2 per cent in 2012 to 9 per cent in 2017. This is likely to spur demand for construction equipment and if the industry's full potential is exploited, the total turnover of the industry could reach around $7 bn by 2020. To illustrate the growth story in Indian infra road and highway sector, are the suitably positioned policy reforms, higher budgetary support, and focus on ease of doing business, all of these have led to speedier project delivery, awarding and execution process in recent times.

Elaborating further, he said that road construction accelerated to an all time high pace of 20 km per day and further expected to achieve 28 kms per day by the end of the second quarter of 2017. The pace of development is expected to pick up further with the MoRTH setting higher road building targets for the coming fiscal. MoRTH's thrust areas also include up-gradation of 50,000 km of state highways into national highways and rolling out of 85% of the stuck projects involving investment of $15 bn, Allocation to the Pradhan Mantri Gram Sadak Yojana has been increased substantially by 26% to $2.9 bn aiding and speeding the execution of rural road projects. Moreover, the National Highways Authority of India (NHAI) seeks to improve execution of highway projects by delegating powers to its Regional Officers (RO) for hiring of equipment and laborers to demolish structures falling within the project. This will enable NHAI to make cumbrance-free land available more speedily to the concessionaire and contractors to carry out their projects within the stipulated timelines.

In an informative address, Mr. S K Mishra, Chief General Manager, NHAI, said that India has the second largest road network across the world at 4.7 million km and is gradually increasing over the years with the improvement in connectivity between cities, towns, and villages. In view of the burgeoning requirement for road infrastructure, Government of India has earmarked 20% of the investment of $1 trillion largely reserved for infrastructure during the 12th Five-Year Plan (2012–17) to develop the country's roads. Consequently, the construction of highways reached an all-time high of 6,029 km during FY 2015-16, and the increased pace of construction is expected to continue in the coming years. The financial outlay for road transport and highways grew at a CAGR of 12.5% between FY2010-2016. The plan outlay for FY2016-17 stepped up budgetary support for Road Transport and Highways to `97,000 crore ($14.46 billion). With the transport ministry setting a target of building 1,00,000 km of roads under the Hybrid, EPC, BOT, and PPP models, the Construction Equipment industry is expected to grow in the range of 13 to 15% per annum. This is also likely to push the demand for earthmoving machinery to the tune of 66,000 units.

Speaking on the on-going initiatives on rural infrastructure and bringing Bharat closer to India, Director (Project) National Rural Road Development Authority, Mahesh Hiremath, reiterated that the government has realized that the next wave of growth would only come once these rural markets are connected to the main land. Hence, the spending of $4 bn on rural roads connecting remote habitations by building well-knit road network will provide umpteen business opportunities. With such enormous spending, most stakeholders are revisiting strategies to address the same. The conference provided avenues on how project developers, equipment making companies, financial institutions and various other stakeholders can redraw their strategies to address and make the most of the upcoming business avenues in the rural infrastructure projects.

Elaborating on the current global scenario of equipment industry, experts appeared unanimous in their view that India has come a long way on this score, as currently most global players are setting up shop in India and producing equipment matching international standards. But the equipment eco-system is still at a very nascent stage in the country. Areas like equipment leasing, renting of used equipment, and usage of telematics is still a new concept in most areas. In fact, the emerging requirement of the industry is forcing large developers to rework the way they used to utilize equipment in most of their projects. They are now open to these global standards as a lot has changed over the last few years with a large number of companies struggling to break through the cash and mid-scale companies taking larger projects. New practices, including innovative schemes, new financing models, and overall government initiatives are quickly changing the landscape and regaining confidence in the international arena.