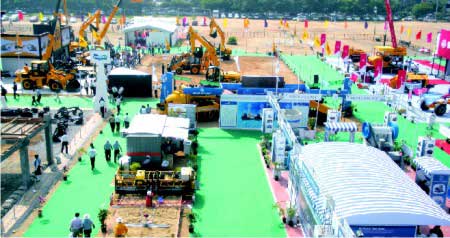 Inaugurated by Hon’ble Minister for Major and Medium Irrigation, Government of Andhra Pradesh, Commex 2008 once again ended on a high note with over 150 exhibiting companies from more than 10 countries and 5,600 visitors gathered at the event.

To sustain and enhance the current economic growth, India is focused on rapid development and has embarked on massive infrastructure and construction projects. This has led to a surge in demand for high quality construction equipment and technology. Initiatives such as the government’s decision to throw open the construction of roads, bridges, airports and ports to the private sector and allowing 100% foreign investment in real estate projects have helped in generating demand for construction machinery/ equipment.

With an estimated investment of $1 trillion in infrastructure in India in the next decade, the earthmoving and construction equipment industry which is at a watershed in its evolution is chartering a new growth.

Given its unique and focused profile, COMMEX’08 has attracted everyone associated with the construction industry, especially senior personnel who are involved in strategic decision making. 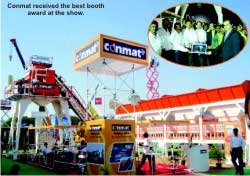 With companies from South Korea, China, Germany, France, United Kingdom, United States of America, Lebanon, United Arab Emirates, etc showcasing the latest technology and equipment to meet the needs of the construction and real estate industry, COMMEX has proven to be the ideal sourcing ground for Asia. With endorsements from relevant trade associations, the show boasted a strong visitor presence from across India and neighboring countries.

It proved to be a successful and rewarding time for both exhibitors and visitors, with several deals being closed at the event.

The organizer, all exhibiting companies, visitors, media and supporting organizations played a pivotal role in propelling construction sector and COMMEX forward. Next COMMEX will return in December 2010 at Hyderabad.