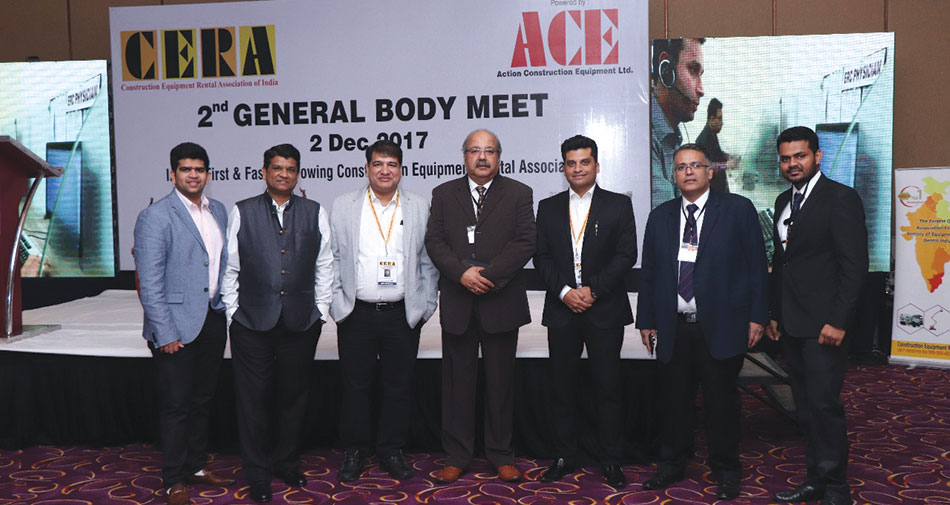 ACE and CERA core members showing solidarity
CERA (Construction Equipment Rental Association of India) since its inception in April 2017, launched with a meager membership of nearly two dozen rental companies, in a metamorphic style, has established itself as the most coherent and credible body safeguarding the interest of its members in every sphere of their operations. The credit for catapulting the body as the youngest, first & fastest growing entity, goes to the sheer determination and professionalism displayed by its founding members, as their stewardship has not just expanded its operational ambit across the country but also gradually going all out to extend its protective cover including providing help to players in resolving legal and equipment insurance related issues in the country.

Addressing the recently held 2nd quarterly CERA General Body Meet (CGBM) in New Delhi, as sponsored by Action Construction Equipment (ACE), one of the founder members and President of CERA, Mr. Rajesh Agarwal, who is also the Managing Director of Jindal Infrastructure, thanked ACE and CERA members for their active support to bring the association to its current stature. While highlighting the concerns of this unorganized rental industry, he said that there is a dire need of standardizing the equipment rental rates, which are currently very low and that the capital cost of equipment must be taken into consideration while fixing the rental rates, and above all, there should be a draft agreement on stamp papers with those hiring the equipment and cranes on rental basis.

Commenting on the functioning of CERA, he claimed that the body plays pivotal role in generating and displaying the stats of rental equipment industry, which in turn helps explaining industry’s characteristic and helps in rental penetration. In addition, it also helps in regularly sharing experience and best practices of members, manufacturers, suppliers, and civil contractors, among others. Moreover, CERA provides a global platform to all rental companies, manufacturers of cranes and equipment, spare parts, filtration and lubricants, to discuss issues that are important to the rental industry. As a matter of fact, the members must focus on increasing its membership counts by telling industry players that CERA as the national trade association places their members at the forefront of the industry by connecting them with the people, products and services, which in turn boost their businesses to newer highs.

Addressing the gathering, the Founder Member & Secretary General of CERA, also CEO of Equipment Planet, Mr. Satin Sachdeva expressed his anguish over the lowest penetration of rental equipment, which is currently abysmally low and exhorted members to help the association to push the rental penetration up to at least 15% from the current rate of 10% as compared to 65% in the US, 35% in China, and 18% in Japan. Through CERA, the members can help develop industry standards and expand its ambit on a national level, as such a move will not just help the rental industry but also the equipment manufacturers and different segments of infrastructure sector. Since its inception, CERA has proven as how much this body matches the true requirement of Indian equipment rental industry and contributed a lot towards its promotion and expansion on the national level. 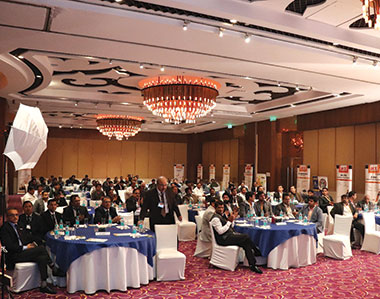 Speaking on the occasion, President, (ACE), Mr. Pradeep Sharma said that all the members of CERA have contributed a lot for its expansion and have also resolved to take the association to new highs. It is trying its best to resolve various concerns currently confronting the equipment rental industry including the delayed payment and non-payment issues. He further added that for a construction equipment maker like ACE being a member of CERA is invaluable. It is providing great industry insights as it enables uninterrupted interaction with key players of the rental industry and helping in better understanding of the emerging challenges in equipment manufacturing and infrastructure sectors, thereby, enabling the industry to work out its strategies accordingly. In a span of less than one year, it managed to expand its membership network in every nook and corner of the country and has become a leading source of information such as business resources, networking and emerging business avenues and allied market opportunities to those engaged in equipment rental business.

In addition to these, other prominent members of CERA, legal luminaries and those experts in the equipment insurance field also addressed the gathering and promised members to help resolve their legal and insurance related issues.