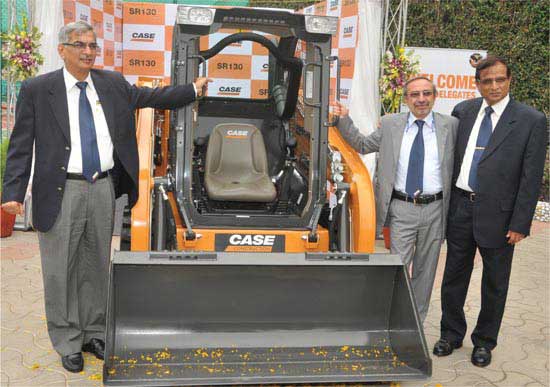 Case New Holland Construction Equipment India (normally referred as Case India) recently launched its new two variants of skid steer loaders SR 130 and SR 150 which will be imported from the company's parent plant in US.

Giving details about the new skid steer loaders, Mr. Peiro Arrivabeni, Marketing Director, Case International Region, said, "SR 130 and SR 150 are being sold by Case for the last one year in international markets. These refined engineered products are the result of technological experience of Case who are the leaders in this segment worldwide.

Elaborating further Mr. D.K. Narang, Managing Director and Mr. D. V. Junnarkar, Head Marketing, Case India said, "the design of the new variants of skid steer loaders have been fully customized to suit Indian applications. The machines have higher pin height, better operator comfort, spacious cab with 25% more interior width and serviceability, higher buckets heights for easy loading in Indian tipping heights. Added features include, more glass surface area to provide 360 degree visibility." According to Case, the new skid loaders come with new power stance chassis with upto 21% longer wheel base and 30/70 front/ rear weight distribution enabling the equipment to lift and haul more materials. The skid steer loaders will find applications mainly in industrial and core construction job sites with space scarcity. The company will look to market the product as a total package offering along with its other products in India comprising backhoe loaders and compactors. However, whether Case will offer any discounts as a part of the total package product offering, the senior officials declined to comment. Present market size of skid steer loaders in India in terms of volume is estimated to be about 600 units. The market size is expected to expand to 1100-1500 units by the year 2015.

Skid steer loaders which are somewhat in a concept selling stage in India, will be marketed by Case based on its brand value. According to Mr. Junnarkar, "we have sold at least 80 units of the earlier version of the equipment to Essar Steel, ECC Division of L&T, JSW Steel, Kalyani Steel and others. The product has found acclaim from all across. We expect to promote the new variants of the equipment based on our brand that epitomize an advanced engineered product." 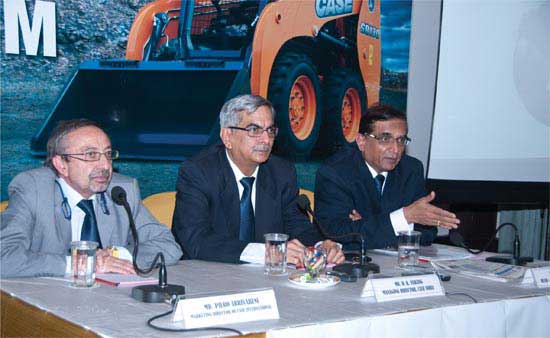 Case India which has an increased exposure in selling its mainstay backhoe loaders and compactors in core construction market, will look to sell the skid steer loaders through its existing 57 dealers with a network of 150 outlets across the country. Mr. Junnarkar says, "to increase sales of the new product variants, we have recently completed its dealership training programme. We are planning to increase sales by expanding our dealership network. Further, we expect to promote sales by providing value in our skid steer loaders through our extensive range of attachments. Besides, our ability to provide easy parts availability as part of service support, leading to better productivity is also expected to support sales for the equipment." Case India has 8 zonal offices, 1 manufacturing plant at Pithampur, 1 mother warehouse, 17 machine depots and 19 office locations across the country.

After the launch ceremony, the company also organized a visit to its Pithampur Production Unit which is a Fully Integrated Setup.

Case India's production facility on an area of 40 acres at Pithampur Industrial area near Indore in Madhya Pradesh producing backhoe loaders and compactors is a fully integrated manufacturing set up, characterizing economies of scale in production of the equipment. The plant was started in 1989 when Case had a technological joint venture with L&T. Case made complete acquisition of the ownership of the joint venture last year. Hence, the set up now rolls out Case branded construction equipment. 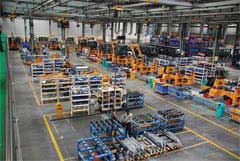 The new entity is instrumental for expansion of Case's footprint in the Indian construction equipment market by manufacturing locally. "We will integrate the plant with our global manufacturing network to position the plant as a world-class manufacturing entity. According to the integration plan, engineering and design knowledge expertise will be transferred to the plant from our other manufacturing facilities, enabling us to produce price competitive and quality products, customized to suit Indian construction applications" says Mr. D.K. Narang, MD, CNH Construction Equipment India, briefing media persons on the set up. He said, "to materialize the integration plan, we will make necessary capital investments in the acquired set up along with deploying adequate skilled human resource."

Case India can produce 16 Backhoe loaders per 8 hour shift on its well integrated production facility spreading over 15,400 sqm that also houses an office block. The assembly shop which is producing backhoe is well aligned with the paint shop that is closely linked to the shot blasting facility which case production official says works on advanced systems. "The intention is to have minimum lead time in production and equally negligible defect in the critical components comprising the chassis and the under frame. Our advanced shot blasting and painting facilities ensure the same," says Mr. S.K. Bohra- Head, Manufacturing Operations, Case India.

Mr. Bohra said, "Integrated set up of the plant provides us economies of scale with fabrication of the critical units taken in house, in order to adhere to our quality standards. Further, efficiencies are being incorporated in a sustained manner in the production systems by minimizing wastage of raw materials and most essentially by curtailing unnecessary movement of men, heavy, medium and light materials like hydraulics and cabs and other smaller fed parts like hoses that go in the machine." The production shops have an elaborated range of materials handling units, integrated with each other for consistent load transfer between the various production and assembly points.

The wide factory location of the plant provides Case India with an adequate spare production capacity to increase its output and will introduce complete set of products to become a full liner in the Indian construction market in near future.