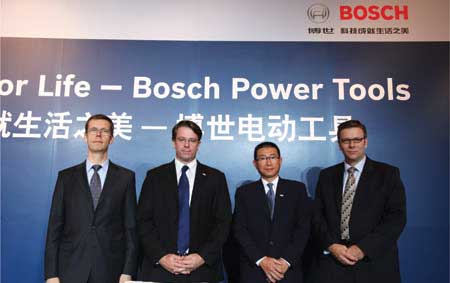 Our slogan, "Invented for Life" stands for high performance, best in quality, easy to use, and innovation to fulfill customer's requirement in the professional and DIY segment. We are determined to find new solutions and improve our products, said Dr. Rudolf Colm, member board of management in his welcome address to the journalists invited from across Asia Pacific at Bosch-Invented for Life press meet at Shanghai. Reports S. A. Faridi.

"It all started with the first demolition hammer rolled out by Bosch Power Tools way back in 1932 followed by electric hammer drill two years later and then jig saw in 1946. In its over eight decades long journey, it adopted safety advancements including rechargeable batteries in 1985, auto lock feature in 2000, and vibration control in 2001. Apart from there, the world's first lithium-ion cordless tools, Ixo, the first cordless screwdriver powered by Li-Ion technology and this was closely followed by 36 V Lithium-ion Hammer in 2005 bringing the power and performance of a corded tool. The most compact dust extraction hammer GBH 2-23 REA Professional joined the Bosch equipment list in 2007. Bosch is currently bracing for over a 100 new and innovative product launches in Asia Pacific in 2010 and majority of them will be based on our unique lithium-ion technology with unique technical upgrades solving genuine problems of our valued tool users, says Vice President Engineering, Dr Falk Herrmann.

Addressing press conference organized for journalists to cover the event – Invented for Life, Bosch Power Tools Ist Cordless Race Competition 2010 – Shanghai in China, Vice President, Bosch Power Tools Asia Pacific, Dr Klaus Thunig said, Bosch sells over 32 million power tools annually. The market trend indicates that satisfied existing Bosch customers are not just lengthening list of buying its power tools but they are also increasingly purchased by the new customers and the fact is that one Bosch Power tool is being purchased every second of the day across the world. Innovation has always been at the core of Bosch Power Tools development strategy and we are committed to achieve this by encouraging creativity in design and engineering. We believe we are helping future generations to play a key role in Asia's continuing economic success. In its quest ensuring convenience and mobility to its users without compromising the power and endurance of tools, Bosch Power Tools Asia Pacific, has recently launched the GDR 10.8-LI Professional, the cordless Impact Driver. The newest addition is both compact and very powerful with shortest head, highest speed, high torque and unmatched battery duration. 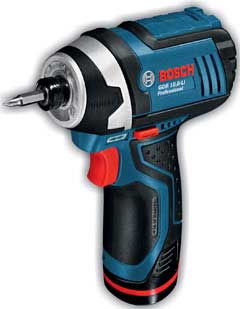 We are ensuring quality to our products across our three manufacturing facilities in Asia Pacific region where we produce 10 million products include Hangzhou in China, Penang in Malaysia and Bangalore in India. To achieve this, Bosch has introduced state-of-art computer simulations, gear layout, airflow calculation to design new products and actual working prototypes are created for extensive testing adhering to working conditions. Adapting to local conditions, Bosch is focusing and giving top priority to local recruits and is imparting training, promoting local executives to senior management cadre.

To inculcate, encourage and inspire creativity amongst the younger generation across Asia Pacific, the global leading supplier of portable electric power tools and accessories, Bosch recently organized the "Invented for life – Bosch Power Tools Cordless Race Competition 2010 in Shanghai. Students from different technical institutes across China were invited to design and build vehicles powered by Bosch Cordless Li-ion drills machines for this competition. Of the total number of fourteen teams qualified for participation in final race at the Shanghai Science and Technology Museum, eight qualified for the final race. In the competition Team Peak finished the race securing the top place, followed behind by Team Leopard for the second place and the best design award went to team Sharp, while team New Dynamics emerged the favorite amongst online voters.