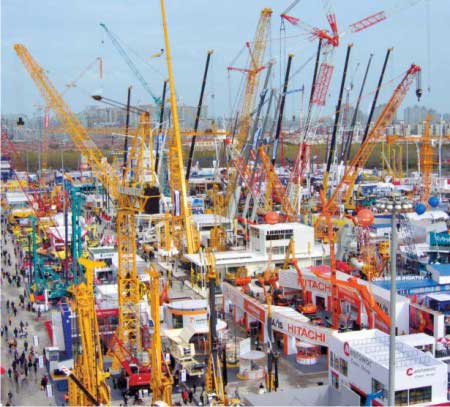 With just 136 days to go for the International Trade Fair for Construction Machinery, Building Materials, Machines, Construction Vehicles, and Equipment—bauma China 2008–to be held in Shanghai 25–28 November, 2008, the countdown has begun. Its organizers Messe Munchen International (MMI) and the Japanese Construction Equipment Association (CEMA) have set the tone as they jointly convened a 3-day meet held at Tokyo from 3-5 June, 2008 to showcase the ongoing preparations of the event, inviting media and others across the world for interaction, reports Mr. S.A Faridi who attended this meet from India. 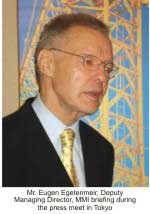 Mr. Egetenmeir, in his opening remarks said that although China is the venue of bauma 2008, we have organized this meet in Japan in order to underline the importance of international markets, especially the Asian ones and project Japanese technical prowess in construction equipment sector. This press meet on the first day was followed by an interaction with CEMA and the remaining two days were for the invitees to visit the plants of two international manufacturers— Hitachi Construction Machinery and Komatsu Ltd–manufacturing facilities, he added

Mr. Egetenmeir said that proposed show in China is set to become an even greater success than the last show held in China itself at Shanghai New International Expo Centre, Shanghai, Pudong. The exhibition spatiality has increased by 50 percent compared to the previous event in 2006, with six halls covering 69,000 sq meters and an openair site with 131,000 sq meters against four halls earlier. The show is expected to attract nearby 1200 exhibitorswith blue chip exhibitors such asHitachi, Komatsu, Sumitomo and Kobelco from Japan, Manitowoc, Trimble, Besser, Vermeer and Gomaco from the United States, Xuzhou Construction Machinery Group (XCMG), Sany Heavy Industry and Zoomlion Heavy Industry from China and some other international manufacturers such as Volvo, Liebherr, Putzmeister, Wirtgen, and JCB.

Mr. Egetenmeir also cited about new exhibitors, international key players in their respective branches: from the formwork and scaffolding industry for instance DOKA and HALFEN will exhibit for the first time at bauma China 2008, while ULMA have participated repeatedly.

Top-class brands as, MAN, SCANIA, PIUSI, LISSMAC and TEXNOKAT have decided to join the show for the first time. Very important Chinese players such as JIANGSU WORLD, SICHUN YIBIN PUSH, CHINA NORTH INDUSTRIES GROUP CORPORATION and LONG GONG will also be the first time exhibitor in the next show.

The other highlights will be national pavilions from Finland, Germany, United Kingdom, Italy, Spain, Korea, and the United States of America and these pavilions will offer insights in the state–of–the–art technology produced in their countries. Research and development trends and a direct access to officials from these countries, offering good opportunities to test their respective field of basic parameters and garner contacts.

The high interest of participation noticeably comes from China’s neighbors like Japan and Korea. The multiplied growth of visitors comes from countries ranking third and fourth, India for instance, by 200 percent and Russia by 300 percent event-on-event.

When it comes to local visitors, the show covers all provinces of China from North to South, and from East to West.

Together with German and Chinese partners, the new Shanghai International Exhibitors Centre has been constructed which has very rapidly become the definitive international venue for trade fairs throughout China. 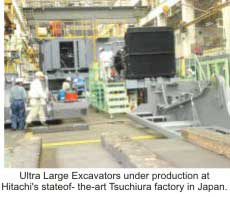 Giving the background about the formation of CEMA and its broad objectives, the Chairman of CEMA, who is also the President, Chief Executive Officer and Director of Hitachi Construction Machinery Ltd, Mr. Michijiro Kikawa said, since its inception in 1990, the Association has successfully navigated significant changes in the business environment, manufactureand sale of construction machinery in the country and abroad. The Association is preparing itself to celebrate the 20thanniversary of its founding in 2010 and would promote technologies developed by the Japanese companies highlighting its contribution to the global construction equipment sector. The broad objectives of CEMA, are promoting sound development of the construction equipment industry and therebycontributing to the development of Japanese economy. CEMA is promptly active in promoting interchange with global industries and countries to make the trade relation smoother, discussing how the international construction equipment industry should tackle new problems in design and production for mutual benefit. The other construction equipment companies connected with the Association are Komatsu, Shin Caterpillar Mitsubishi, IHI Construction Machinery Ltd, Tadano and Kobelco with their Presidents and CEOs as the Vice Chairmen of CEMA.

There has been a continuous growth of construction equipment industry in Japan in the past five years. The top ten ranking list for exports from Japanese products starts with China followed by United States, Korea, Germany, United Kingdom, Brazil, Italy, France, Taiwan, and Sweden. Vice-versa a majority of imports of construction machinery to Japan come from the USA, China, Germany, Singapore, Korea, and Switzerland. The growth prospect from the industry are quite good, he added.

The invitees were taken to Hitachi Machinery Tsuchiura and Kasumigaura works. These are the main factoriesfor the Group which have played a key role in achieving high-quality production under the Made by Hitachiconcept followed by its other 35 factories across the globe. Main products range of HCM group are hydraulic excavators, wheel excavators, mini excavators, wheel loaders, crawler cranes, transfer cranes, skid loaders, forklift trucks, rigid dump trucks, compaction equipment, ultra large excavators, road rollers and so on. The company has net sales of 940.5 Bil.Yen.

At Tsuchiura plant which is spread over a large area, Hitachi produces small to medium size excavator and role-out an excavator in every eleven minutes. The unique feature of this state of the art fully automated chain production facility is that it can produce any size of excavator simultaneously, which is backed by a sophisticated computer controlled warehouse, which delivers the different size of parts/components as per the different size, number of machines planed for the day. These products are designed by computer-aided design CAD system and are thoroughly inspected by an array of experimental and testing equipment, ensuring high productivity, durability, economy and safety for the clients. The factory has state-of–the-art R&D laboratory.

The Hitachi factory at Kasumigaura is mother factory for critical components where it produces centre joints, swing device, control volve, roller, swing, bearing, Hydraulic pump, travel device and shipped to its plants around the world.

Welcoming the invitees to the Ibaraki Plant of Komastu, Mr Taizo Kayata, Senior Executive Officer and President, Overseas Marketing gave an interesting and informative presentation about the company, its international operations, manufacturing facilities, sales turnover etc. According to the presentation, the company having been set up in 1921, has international operations across the globe with 166 companies, employing nearly 39,267 people. It has 10 plants in Americas, 8 in Europe and CIS, 9 in Asia, including two in India, 6 in China, and 11 in Japan. It is going to add one more plant in China to manufacture undercarriages in 2008, a plant in Japan by 2009 to manufacture super large excavators and a plant in Russia to manufacture excavators and forklift trucks by 2010. Its products range include bulldozer, hydraulic excavators (crawler- type and wheel- type), rigid dump trucks, articulated dump trucks, motor graders, mini excavators, backhoe loaders, skid steer loaders, forklift trucks etc. Its net sales of this equipment is 2,048.7 bil yenacross the global construction and mining industries.

Komatsu Presidant and CEO, Kunio Noji announced that the Company is going to launch Hydraulic Excavator PC200-8, the world’s first hybrid construction equipment. The PC200-8 Hybrid is powered by the Komatsu Hybrid System which uses a newly developed electric motor which turns the upper structure, power generation motor, capacitor and diesel engine. Compared with the standard PC200-8 hydraulic excavator, the hybrid model achieves about 25% reduction of fuel consumption. Earlier in May 2007, Komatsu launched the world’s first hybrid electric forklift trucks on the market. We are introducing this hybrid excavator as it is our flagship construction equipment. As a leading company of the construction equipment manufacturing industry, we are determined to meet the needs of the time by practically proposing innovative equipment designed to reduce environmental impact, including CO2reduction. Compared to the standard PC200-8, we have achieved an average of 25% reduction in fuel consumption. Furthermore, in the operation tests by customers, we have confirmed the maximum reduction of 41% at a jobsite where the machine’s upper structure turns more frequently.

Komatsu Ltd also expands its line of super-large haul trucks by launching the 960E-1(960E) model haul truck (max. payload: 327 tons) with AC electric drive. The 960E is the largest model of the Komatsu Group and measures 7 meters high with its tires of almost 4 meters in diameter. As in the case of Komatsu’s other super-large electric-drive haul trucks, the 960E was designed and developed by Komatsu America Corp. and is being produced at its Peoria Manufacturing Operation in Illinois for mines around the world. Since the market introduction of the 930E AC electric-drive super-large haul truck (max. payload: 290 tons) in 1995, Komatsu has enjoyed a leadership position of the industry. Komatsu has already delivered over 650 units of the best-selling 930E model. Based on the high evaluations for the 930E, Komatsu developed the 960E. The 960E is equipped with a Komatsu 3,500 horsepower engine providing the lowest brake specific fuel consumption (BSFC) at rated horsepower for this truck class. The 930E-SE model, a higher-power version of the 930E, is also powered by this engine, having been deployed for over 250,000 hours in mines in North America, Chile and Australia, proving the reliability of this engine in the field.

In view of infrastructure development taking place in Asia and in India, the company would like to promote this in these markets as it suits conditions in these regions, he added.