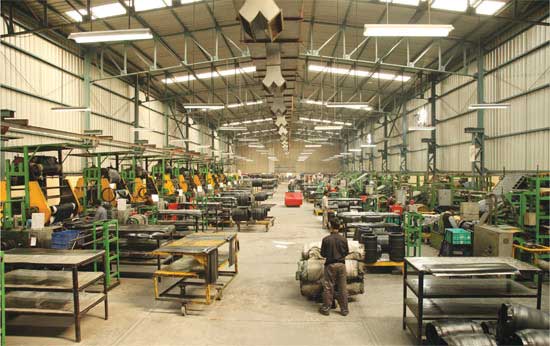 BKT is one of the world's leading manufacturers of off-highway tyres having the widest product range, strengthened by more than 2000 SKU's (Stock Keeping Units). Established in 1988, BKT (Balkrishna Tyres), entered into the production of cross ply off-highway tyres in 1995. Exports contribute to 94% of BKT's sales while the rest is contributed from domestic sales. BKT has overseas offices in USA and Italy.

According to Mr. Arvind Poddar, Vice-Chairman & MD, BKT "we have targeted to achieve a 10% share in off-highway tyre solutions by 2015 in the global market. Achieving the set target will boost BKT's sales to $1300 million. We are confident of achieving our target, with the increasing demand from the export market, with around 86% of the requirement coming from the replacement segment and rest from the original equipment manufacturers."

BKT exports it's off-highway tyres to more than 130 countries wherein its 48% sales come from the European markets, 24% from US, and 28% from other markets including India.

BKT is working on its backward and forward integration to facilitate its ambitious growth plans. The backward integrations are being done by increasing its existing production capacities and also by setting up new production facilities. Its forward integration is being implemented by strengthening supply chain, linked to production, for onward movement of the finished products. Value addition in marketing is being done through better product offerings in the off-highway value chain and through a robust research and development support.


Providing details of the market expansion, Mr. Poddar says, "Our new upcoming facility at Bhuj, which is spread over an area of 300 acres, with a capital investment of $365 million will support 80% of our capacity expansion. We are confident of attaining 100% capacity utilization by 2014. The new plant will produce 1,20,000 Metric tonnes per annum of mixed production comprising radials, bias tyres, large OTR's and agri tyres. The plant will score on logistics advantage, by providing lesser lead times, being located close to important export gateway ports in Gujarat state. With most of the major machinery for the new plant at Bhuj already into the commissioning mode, part of the plant has already started producing tubes from December 2011. With the full range of tubes going to be available for various off-highway tyres, the plant will serve regular requirements of our distribution partners."


Mr. Poddar says, "For capacity addition, we will also bank on our facilities at Chopanki and our earliest unit at Bhiwadi in Rajasthan. Besides, capacity expansion will also be helped by our Waluj-Aurangabad facility. The expansion process of the existing units is likely to be completed by August this year." Post expansion capacities of existing units will be 1,67,000 MT by end of 2012 from 1,20,000 MT at present. Supported by the upcoming Bhuj facility, BKT's total capacity is expected to be 2,70,000 MT by 2014.

The ability of BKT to meet high volume demand is supported by its large unit which has a capacity of producing 150 tyres of various sizes. The company offers tyres in various weights starting from less than 2 kg to 1700 kg along with different rim sizes in the range of 5-54 inches. The nature of tyres comprises conventional variant of cross plytyres to the advanced polyester radials, all steel OTR radials, aramide–belted run flat for defence applications tyres. Mr. Poddar points out"Our extensive market presence is backed by our ability to deliver multi-varied product offerings across the off-highway segment."


The ability to provide wide range of tyres is based on "flexible" production process adopted by the company. "High and varied production output is facilitated through a manufacturingprocess that allows frequent changes of moulds." Eight to ten moulds are changed every day in our plants based on the requirement of the tyres to be produced. Production flexibility is supported by our prompt R&D team in producing the required tyre variant within a span of 10-12 weeks. The planned product development support allows us to produce more than 160 new customized variants every year.

Moulds are one of the major constituents for production of tyres. It givestyres the desired finish and shape based on applications. To have competitive product positioning through its tyres, BKT has recently started its new mould plant at Dombivali, near Mumbai. According to Mr. Poddar, "The new plant would double our capacity to produce high quality moulds, offering better finish, with the help of state-of-the-art machines. The mould manufacturing plant will play an important role in rolling out tyres from our Bhuj plant, since timely mould availability is a major requisite in the tyre manufacturing process."


According to Mr. Poddar, "Market expansion of BKT will come from its captive customers, led by marketing and technical support from its channel partners. Having enjoyed presence in international markets, BKT will keep focusing on the same in future. The presence in domestic market will continue to be mediocre." However,"Given the strategy of its global OEM customers, many of those having presence in India or are planning to have so by promoting of second-hand equipment, BKT may look for an increased focus at home. However, in that case, Mr. Poddar points out that "Sales and support for the tyres will be taken up by our channel partners and distributors."